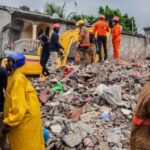 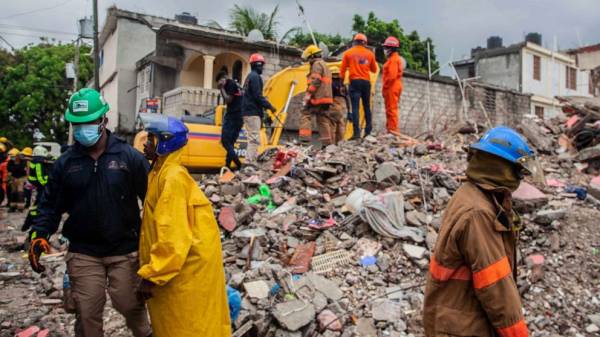 Luria Civil’s wails could be heard outside of the cemetery. As shovels scraped dirt onto her daughter’s grave, she chanted and sobbed.

She lost two children after Saturday’s 7.2 magnitude earthquake hit Haiti. Her house had collapsed on top of her and her family, she told ABC News. She, her husband, and her severely wounded son, who was medevacked to port au Prince, survived. But she still had to dig her two other children, now lifeless, out of the rubble.

The scenes across Haiti are devastating. Coffins strapped to the backs of motorbikes are being driven out of earthquake battered villages. Boulders the size of bulldozers are blocking roads. Landslides following Tropical Storm Grace have reshaped the landscape, mutating sides of mountains.

The death toll in Haiti, now at 2,189, keeps climbing, according to the Haiti Office of Civil Protection. While search and rescue teams on the ground keep pushing forward, hoping to find more survivors and provide much needed medical help, ABC News reports that thousands are still sleeping under tents, surgeries are being performed outdoors and hospitals in rural areas are in desperate need of the basics, including water, electricity, gloves and donated blood.

While Saturday’s earthquake is not as devastating as the 2010 earthquake, which killed more than 200,000 people, Haiti is facing multiple crises as the same time. The country has been reeling from the assassination of its president, leaving the government politically unstable. The coronavirus vaccination rate is less than 0.1%. And experts say gang violence is at its worst in two decades, according to the Associated Press.

Following the earthquake, United States response teams were activated, but due to the tropical storm, they had to suspend their critical operations on Monday, according to U.S. Agency for International Development Bureau of Humanitarian Affairs Assistant Administrator Sarah Charles.

“The safety and security of our partners and our operations is of the utmost importance, but our top priority really is getting assistance and assistance at scale to people,” Charles said. She later added that “the [Disaster Assistance Response Team] is now on the ground working to urgently assess needs and deliver life-saving assistance.”

Both USAID DART and the elite Fairfax County’s Urban Search and Rescue team are now on the ground in Haiti, helping local and international efforts to provide food, medical care, shelter, and search and rescue efforts.

The number of injured and homeless keeps rising, too, according to the Haitian agency. More than 9,900 people have been injured, and even more are left homeless. The earthquake left much of the countryside damaged, destroying more than 7,000 homes and damaging nearly 5,000.

The teams on the ground said they haven’t rescued any people still alive and trapped in buildings.

“We have not yet since found any signs of persons alive trapped in buildings,” John Morrison, the public information officer for Fairfax County’s Urban Search and Rescue team, said on Tuesday’s media call. He caveated his statement by adding that in previous earthquakes, his rescue team has managed to save people 8-10 days after a building collapse.

Getting supplies to the people of Haiti is a priority, officials said.

As of Tuesday evening, “the U.S. Coast Guard has flown 72 sorties [trips], saved 67 people, and assisted 89 people,” according to a USAID spokesperson. “They have also transported 143 medical and search and rescue staff, including members of the USAID DART, and 5,500 pounds of medical supplies into the area.”

Following the 2010 earthquake, USAID has been working closely with partners on the ground in Haiti for years to make sure local response capabilities can be immediately activated in case another disaster strikes, including being able to immediately provide food and types of shelter, officials said. Charles indicated that this pre-planning allowed USAID local partners to respond quickly following Saturday’s earthquake.

While USAID is already working with international organizations to provide significant humanitarian needs in Haiti, they hope to receive more help in the upcoming days and weeks, according to Charles.

Henry Romero/ReutersA woman washes kitchen utensils at a stadium used as shelter for residents who were evacuated from their damaged homes after Saturday’s 7.2 magnitude quake, in Les Cayes, Haiti, Aug. 18, 2021.

This isn’t the first crisis Haiti has faced this summer. Just last month, President Jovenel Moïse was assassinated, which left the country in a political upheaval.

“We continue to work closely with Haiti’s interim government to assist with the investigation into the assassination,” State Department’s Western Hemisphere Affairs Acting Deputy Assistant Secretary Laura Lochman said on a media briefing call Tuesday. She also emphasized the U.S. government’s support in finding and creating Haitian-led solutions that are in the interest of the Haitian people.

“The United States stands ready to offer all appropriate assistance, and we’ll continue to work closely with our Haitian partners to determine how we can best support recovery efforts,” Lochman later added.

While teams on the ground are working non-stop, there just isn’t enough aid to go around.

Luria Civil took ABC News to what was left of her house. During the walk, she pointed to her neighbors’ homes, now all flattened. A set of twins were killed in the house next door.

A crowd had gathered around her home. When asked where they were sleeping, they all said, “outside on the street.”