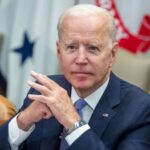 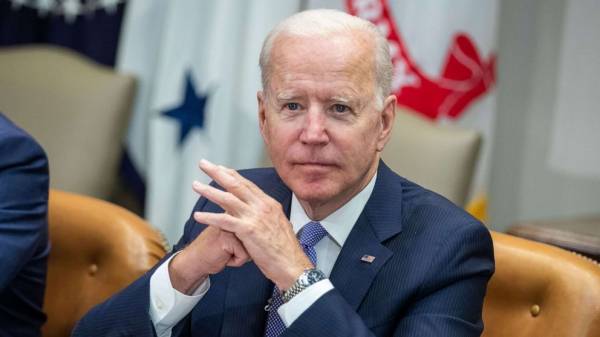 President Joe Biden at 100 days was celebrating a big legislative win and a bigger potential win for the nation.

Confidence that the pandemic was coming to an end was feeding a national optimism about the year ahead — a sentiment shared by 64% of Americans in an ABC News/Ipsos poll.

Biden at six months is fearing massive legislative paralysis as well as a potential resurgence of COVID-19. Optimism about the next 12 months has plummeted nearly 20 points in the latest iteration of that poll.

Shawn Thew/EPA via ShutterstockPresident Joe Biden meets with union and business leaders to discuss his $1.2 trillion bipartisan infrastructure plan in the Roosevelt Room of the White House in Washington, D.C., July 22, 2021.

Concerns about the delta variant are only part of the story. Crime, immigration, inflation — all are mixing into a potentially toxic political stew for Biden and Democrats as they seek unity and some critical broader deals in the days ahead.

It’s been said before, but this could be the week for a bipartisan infrastructure package to come together and a breakthrough on criminal-justice reform is possible as well. It’s also plausible that none of those things happen — and that the Democrat-only budget vehicle stalls, too.

From the start of his presidency, Biden has sought to unite the country in the fight against COVID. He hasn’t healed national divisions that way, but he has gotten broad credit for his leadership.

That’s a powerful notion in Washington, so long as it lasts. Now, his challenge will be to power through while leading a country that’s adding new worries to old conceptions — concerned that things are looking bleaker than they did just weeks ago, and with good reason.

The resurgence of COVID-19 is not only jeopardizing the return to normalcy, it’s also proving politically perilous for the president.

According to the latest ABC News/Ipsos poll, about 6 in 10 Americans are now concerned they or someone they know will become infected with COVID-19 and Biden’s approval rating on the handling of the pandemic dropped nine points to 63%.

Leading health experts like, Dr. Anthony Fauci, the chief medical adviser to Biden, said the uptick in cases is being driven by the unvaccinated.

Michael Brochstein/PolarisDr. Anthony Fauci, Director of the National Institute of Allergy and Infectious Diseases, appears at a hearing of the Senate Health, Education, Labor, and Pensions Committee, in Washington, D.C., July 20, 2021.

In many cases, the areas with the lowest vaccination rates are conservative. In the past week, prominent Republicans like Rep. Steve Scalise and former White House press secretary and Arkansas gubernatorial candidate Sarah Huckabee Sanders have spoken out about their vaccination experiences.

Fauci said revising masking guidance for the vaccinated is “under active consideration” in an interview on CNN.

“We’re going in the wrong direction if you look at the inflection of the curve of new cases,” said Fauci.

He later added, “50% of the country is not fully vaccinated, that’s a problem.”

And on Fox News Friday, he was asked if re-upping mask mandates will disincentivize people to get vaccinated.

The calendar says it’s still 2021 but with the two highest-profile political party leaders holding events over the weekend, it seemed like an active campaign season is already getting underway.

In his first in-person campaign appearance since taking office, Biden voiced some of his most pointed criticisms to date of former President Donald Trump while stumping for longtime ally and former Virginia Gov. Terry McAuliffe in Arlington, Virginia.

“This guy Terry is running against is an acolyte of Donald Trump for real,” Biden told supporters after noting that he “whipped” Trump in Virginia in November.

Although the rhetoric from Trump was in line with what the former president has been saying since leaving office, the move on Biden’s part was more surprising given his administration’s general reluctance to directly attack his predecessor. The rhetorical shift could indicate the kind of tone Democrats are likely to follow heading into next year’s midterms.

House Speaker Nancy Pelosi said she is confident in the bipartisan select committee to investigate the Jan. 6 attack on the U.S. Capitol and, despite House Minority Leader Kevin McCarthy pulling his recommendations for the panel, is moving forward with the addition of more Republicans with Rep. Adam Kinzinger accepting her invitation on Sunday afternoon. “Maybe the Republicans can’t handle the truth, but we have a responsibility to seek it, to find it and in a way that maintains the confidence of the American people,” she told ABC “This Week” anchor George Stephanopoulos. https://abcn.ws/3iR9D2G

ABC News’ “Start Here” podcast. Monday morning’s episode features Harvard University professor and ABC News contributor Dr. John Brownstein, who tells us how we should think about what’s behind the latest COVID surge. Managing partner of The Cochran Firm and ABC News contributor Channa Lloyd explains how new accusations could impact R. Kelly’s federal trial. And ABC News Chief Justice correspondent Pierre Thomas tells us about the results of a week-long ABC News investigation with the Gun Violence Archive into all recorded shooting incidents in the US. http://apple.co/2HPocUL

FiveThirtyEight’s Politics Podcast. According to data from the U.S. Bureau of Labor Statistics, consumer prices rose 5.4% between June 2020 and June 2021, exceeding the 2% target rate of inflation set by the Federal Reserve. It is the largest 12-month increase since August 2008 and according to a recent NPR/PBS NewsHour/Marist poll, inflation is now Americans’ leading economic concern. Many economists, including Fed Chair Jerome Powell, say that the increase in prices is only temporary as the country comes out of a pandemic-induced recession. Republicans have argued that high inflation is a result of Democrats’ stimulus packages. In this installment of the FiveThirtyEight Politics podcast, George Washington University economics professor Tara Sinclair joins to explain what is going on with the economy and what could happen as a result of a spike in prices. https://53eig.ht/3xXBXXq