The Hungarian Roots of Agi’s Counter

Some of the best things in life are not sought out but thrust upon us. Hungary, for instance, was introduced to coffee by way of its occupation by the Ottoman Empire. At Agi’s Counter, in Crown Heights, the chef Jeremy Salamon’s childhood memories of his grandmother sparked the creation of the first thing you notice about his Nosh Plate: huge crackers that undulate like Frank Gehry wall shards. “Growing up, my mom’s mom belonged to a country club, so she would always be eating these very large crackers—like, huge,” Salamon told me. “And she would just be buttering them, and I always thought it was just so comical. It was a sign of bouginess, for some reason: I have this large cracker. So I was, like, I think everybody deserves large crackers.” 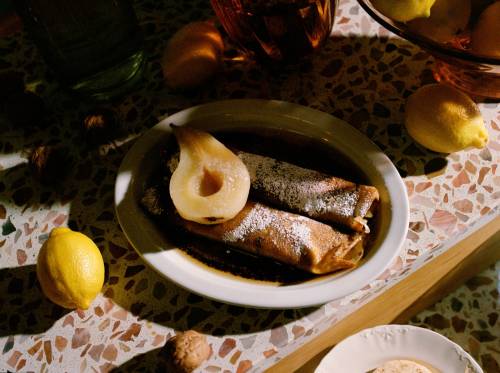 Palacsinta, or crêpes, are filled with sweet cheese and smothered in brown butter.

Made of spelt flour, water, olive oil, and sea salt, the crackers are speared into silky chicken-liver mousse. Salamon could have stopped there, but surrounding this bounty are a pile of pickled vegetables, a soft-boiled egg crowned with whipped devilled-egg filling, and a ramekin of körözött, a kicky Hungarian pimento cheese.

Salamon’s other, paternal grandmother, however, is the namesake of this genial counter-service spot: Agi, ninety-four, Hungarian, and now living, after many lifetimes, in Boca Raton. “She came to America when she fled Hungary in ’56, during the revolution,” Salamon, who has cooked at Via Carota and the Eddy, said. “So she has a very different idea of Hungarian cuisine than I think it’s like now. She would cook a mish-mosh of stuff—goulash next to eggplant Parmesan, or steak Diane next to paprikash.” 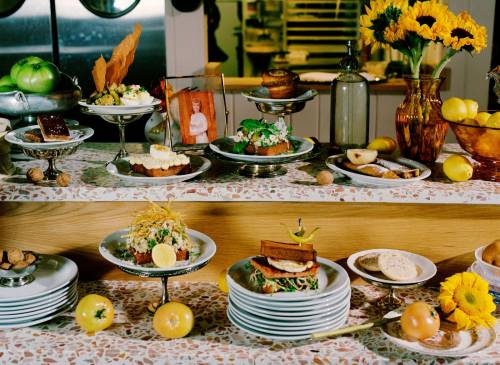 Renee Hudson creates an impeccable seasonal array of pastries, such as a delicate Gerbeaud cake (top left), after that of the Café Gerbeaud, in Budapest, and the Ferdinand bun (top center).

Currently, none of these are available at Agi’s Counter, which opened in November and serves an exceptionally thoughtful menu of Hungarian-inspired breakfast and lunch dishes. (Dinner, featuring a Hungarian wine list, is planned for late spring.) The décor evokes a diner meets a millennial’s apartment, decked with heirlooms—blond wood, terrazzo counters, open shelves displaying Depression glass and vintage floral china, faux-Victorian wallpaper. 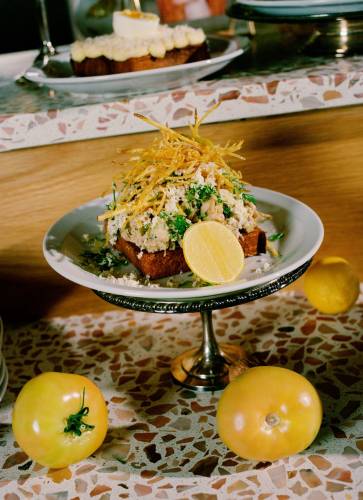 The open-faced sandwiches include the Jammy Egg Mousse (top) and the Confit Tuna (bottom).

On a recent morning, breakfast included the hearty Leberkase, in which a thick slab of spongy pork pâté is sandwiched, with fried egg and pear mostarda, between even thicker slabs of Pullman-style bread. But it was the tender herb-flecked biscuit—dill aroma meeting your nose as you lean in to bite, spread with mayo and stacked with a soft fried egg and assertive Alpine Cheddar—that made for the perfect morning snack.

At lunch, open-faced sandwiches included the Confit Tuna, topped with fried shoestring potatoes, pickled pepper, and a shower of shaved horseradish, and the Jammy Egg Mousse, which sets oozy egg halves atop bread piped with more of that devilled-egg filling. Sweet-cheese-filled, brown-butter-smothered palacsinta, or crêpes, are well paired with Thumpers, sodas of house-made syrups, such as the lemon verbena and fennel—spritzed via oldfangled glass bottles, by the fourth-generation family-run Brooklyn Seltzer Boys. 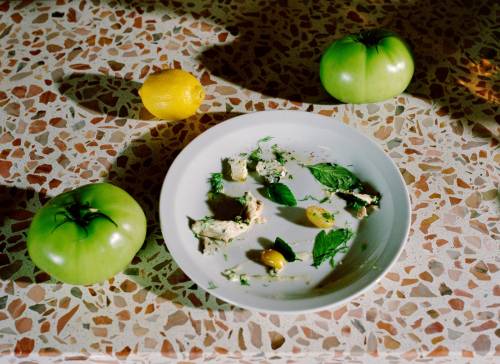 On Sundays, Agi’s offers doughnuts—until they sell out.

One defining element of Hungarian cuisine is its pastry tradition, and here the pastry chef Renee Hudson creates an impeccable seasonal array. A recent selection included a delicate Gerbeaud cake (after that of Café Gerbeaud, in Budapest, layered with walnuts and apricot jam and topped with fruity chocolate and flaky salt), a warmed Ferdinand bun (beautifully swirled on top and redolent of cardamom), and a shortbread cookie with the satisfying crumb of a caraway sandie.

On Sundays and Sundays only, Agi’s offers doughnuts—until they sell out. “In Hungarian, doughnuts are called fánk. We’ve made countless jokes about it. We’ve got the fánk,” Salamon said. “Fánkytown.” He described what makes them unique: “They have this cotton-candy-like texture. They’re super fluffy. When you pull it apart, it’s very wispy.” The doughnuts I had were speckled with lemon zest, filled with pear-vanilla-bean jam, dusted with a flurry of powdered sugar, and light as air. Perhaps you, too, should head down to Fánkytown, and get the fánk. (Pastries $3-$10, dishes $5-$18.) ♦

Previous : The Case Against the Trauma Plot
Next : The hollowness of Biden’s January 6 speech