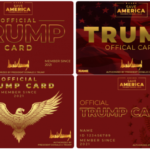 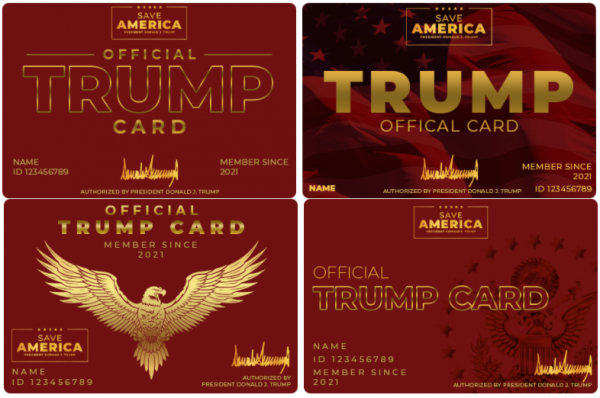 The former president is already reported to be sitting on nearly $102 million in campaign cash – the strongest showing among any Republican, ahead of the 2022 midterms and the 2024 election. He has hinted repeatedly that he may take another shot at the Oval Office in three years’ time.

The red and gold, credit card-style cards include four potential designs, featuring an eagle, the presidential seal, the American flag, or a clean look without any imprints. The cards include the cardholder’s name, identification number, the date when the member signed up, and an engraved signature of the billionaire real estate mogul along with the message “Authorized by President Donald J. Trump.”

Trump was said to have called the cards “beautiful” and insisted that “the American People” should decide which they like best, because “they ALWAYS know best!”

The Trump cards are the latest scheme in the former president’s long record of gimmicky fundraising tactics, which began ahead of the 2016 campaign with his signature “Make America Great Again” hats. The latter soon expanded into MAGA t-shirts, flags, bumper stickers, and other accessories.

In a separate letter to supporters last week, the campaign offered “signed photos” of Trump for the low, low starting price of $45.

“Now that you’re officially part of the SAVE AMERICA MOVEMENT, President Trump wanted to do something special for you,” the letter with the photo offer said. “This offer is available to you for ONE HOUR. After that, you may never get another chance to receive a signed photo from President Trump,” the appeal warned. “President Trump REALLY wants you to have the photo that he signed for you,” it added.

In the days that followed, the Trump Team issued three more emails, urging supporters not to let “the Radical Left play us for weak fools and losers” and informing them that Joe Biden “will never know what it feels like to have the support of REAL American Patriots” like them.

Trump’s fundraising efforts in 2021 have already outperformed those of all other Republicans, netting $82 million in donations from 3.2 million contributors, with the former president’s Save America political action committee accumulating $62 million of that sum. In total, the former president’s election war chest has $102 million in it at the moment – and is the biggest among any ex-president in US history.

That money may be spent in the upcoming midterm elections, in which all 435 seats of the House of Representatives and 34 of the Senate’s 100 seats will be up for grabs. Trump could also save it for the 2024 presidential election, should he formally decide to run. The United States has one of the longest election cycles among any country in the world, and no formal restrictions on when campaigning can begin. It’s not uncommon for politicians to announce their intention to run for president just one or two years into an incumbent’s term.

The former president’s fundraising team has taken flak from some supporters over its aggressive tactics. Last month, a separate fundraising campaign by Trump’s son, Don Jr., to help his father’s class action lawsuit against Big Tech, fell flat as social media users asked why the real estate tycoon couldn’t reach into his own deep pockets to pitch in.