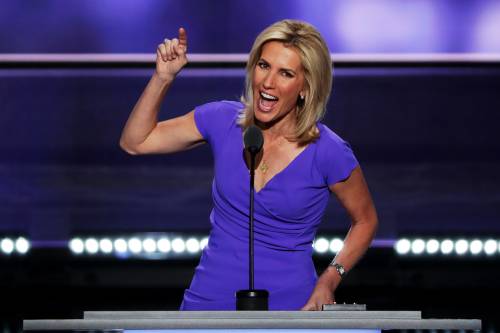 As the Capitol riot unfolded on January 6, Fox News hosts knew exactly how bad things were.

“The president needs to tell people in the Capitol to go home. This is hurting all of us. He is destroying his legacy,” Laura Ingraham texted to White House Chief of Staff Mark Meadows. “Please, get him on TV — [the riot is] destroying everything you accomplished,” Brian Kilmeade wrote to Meadows. “Can he make a statement, ask people to leave the Capitol?” wrote Sean Hannity in yet another Meadows text.

The texts, revealed during a Monday hearing of the House January 6 Commission, were at odds with the hosts’ on-air comments on the night of the attack. Ingraham suggested that “antifa supporters” may have been responsible for the violence. Kilmeade took a similar line: “I do not know Trump supporters that have ever demonstrated violence that I know of in a big situation.” Hannity, for his part, asserted that “the majority of them were peaceful.”

This is tangible proof that some of Fox’s marquee personalities knowingly lied to their audience about January. The lying began basically immediately, in the direct aftermath of a national tragedy.

This isn’t the only issue on which Fox’s dishonesty has been exposed. On one of the fundamental policy topics of the day, the pandemic, the right’s most influential news network is saying one thing to its audience and doing another in private.

Fox News’s programming on vaccines and vaccine mandates has been relentlessly hostile. Yet more than 90 percent of Fox News employees are fully vaccinated, and the company has a vaccine mandate that’s actually stricter than the one President Joe Biden has proposed for large corporations. Hosts tend not to mention this on air and, on the rare occasions that they do, they mislead their audience about it.

They are lying to their audience, and anyone paying close attention can see it.

These incidents speak to a deep pattern in modern conservatism, a parasitic relationship in which a super-wealthy elite preys on the fears of the conservative base for profit.

Fox and the GOP’s “plutocratic populism”

Last summer, political scientists Jacob Hacker and Paul Pierson published a book titled Let Them Eat Tweets that diagnosed what they see as the central political strategy of the modern Republican Party. They call it “plutocratic populism”: a “bitter brew of reactionary economic priorities and right-wing racial and cultural appeals.”

The basic idea is that the super-rich and their allies are in the driver’s seat of the GOP’s policy agenda — and what those elites want, more than anything else, are tax cuts and attacks on the social safety net. Recognizing that making the rich richer is an unpopular policy agenda, they have married their political fortunes to the forces of cultural reaction. The GOP wins elections by engaging in thinly veiled appeals to racism, xenophobia, and sexism; the super-rich win when those GOP majorities pass deeper and deeper tax cuts.

Fox News, which Hacker and Pierson call in their book the “the epicenter of resentment politics,” plays a crucial role in cementing this relationship.

Fox’s programming is 24-7 conservative backlash politics, relentlessly focused on ginning up fear: fear of Democrats, of Black people, of immigrants, of feminists, of LGBTQ individuals, and even of college professors and students. Study after study has found Fox News has a profound effect on its viewers and American politics: It has helped Republicans get elected, pushed incumbent members of Congress to the right, and likely even facilitated the early spread of the Covid-19 pandemic.

And yet, Fox’s corporate structure is at odds with its actual product. The network is part of an international media empire owned by Australian billionaire Rupert Murdoch, who has badmouthed Trump in public and in private. Its headquarters are in midtown Manhattan. The network’s most aggressively populist host, Tucker McNear Swanson Carlson, is from a patrician family; his stepmother comes from the Swanson family of frozen food fame.

Fox, in short, is plutocratic populism incarnate — the purest distillation of the Hacker-Pierson analysis of the GOP. Fox hosts lie about January 6 and Covid-19 because that is what they exist to do.

Of course, not all plutocratic populism is disingenuous. Some of the right’s billionaires, like leading Trump backer Rebekah Mercer, appear to be true-believer culture warriors in addition to being plutocrats.

This is consistent with a separate body of political science research that finds that, on the whole, self-interest is less politically salient than partisan and cultural identity. Broadly speaking, people identify with a political party based on cultural affinities; once they do, they tend to bring their economic views in line with whatever the party’s mainstream is. That’s part of why white working-class voters vote against social safety net expansions that would benefit them.

But there is at least some dishonesty going on in today’s conservative movement, as the January 6 commission and Fox vaccine mandate debacle have exposed. And that’s something that we, as a society, need to be honest about.

Previous : The Culinary Playground of Fulgurances Laundromat
Next : Democrats’ latest attempt at immigration reform is doomed