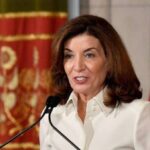 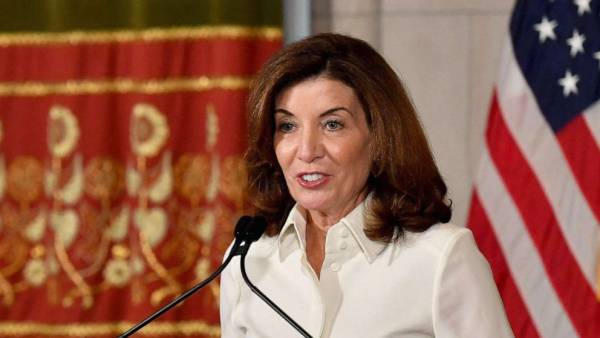 Cuomo officially left office this week after a report by the New York Attorney General’s Office released earlier this month alleged he sexually harassed 11 women. Cuomo has repeatedly denied claims of sexual harassment and said he was resigning to prevent the distraction of an impeachment trial, though he was certain he would win.

The staffers implicated in the report “are no longer part of this administration,” she said on MSNBC’s “Morning Joe” Wednesday morning.

The day after he announced he’d resign, she vowed to fire anyone connected to the report who contributed to the culture of sexual harassment.

Angela Weiss/AFP via Getty ImagesNew York Governor Kathy Hochul speaks to the media during her swearing in ceremony at the New York State Capitol in Albany, N.Y., Aug. 24, 2021.

A number of state legislators had demanded that officials close to Cuomo and his scandals be removed as Albany moved forward under new leadership.

New York Republican Sen. Robert Ortt demanded a “clean slate,” adding in a statement earlier this month, “I am calling for the immediate resignation of state agency officials with direct ties to the soon-to-be former Governor and the many scandals that have plagued state government.”

MORE: Gov. Kathy Hochul to New Yorkers: 'You will find me to be direct, straight-talking and decisive'

When asked how the culture will change now that she’s at the helm, Hochul told MSNBC, “Anyone who crosses the line will be addressed by me.”

Basil Smikle, a political strategist and lecturer at Columbia’s School of International Public Affairs, told ABC News her decision to remove those staffers “sends a message to voters that the era of Andrew Cuomo is over.”

“It was a clear intent on her part. She talked a lot about accountability and transparency. The act itself is a follow through,” he said.

However, it may be a bigger challenge to change the culture in Albany as a whole.

“It would be wrong to assume that these early moves will erase all of the toxicity. She has to undertake a more thorough and sweeping investigation of state agencies, state contracts, even relationships with legislators and center her administrative policies on diversity and on women to really be able to affect the substantial change in the long run,” he added.

Hochul also said Wednesday she’s looking into staffers involved in the controversial handling of nursing home data during the pandemic.

“I need to continue working to identify principles involved in those decisions,” she told “Morning Joe.”

She noted she’s asked for a 45-day period to assemble her team.

“There’s just a lot of things that weren’t happening and I’m going to make them happen,” she said. “Transparency will be a hallmark of my administration.”