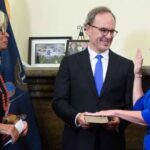 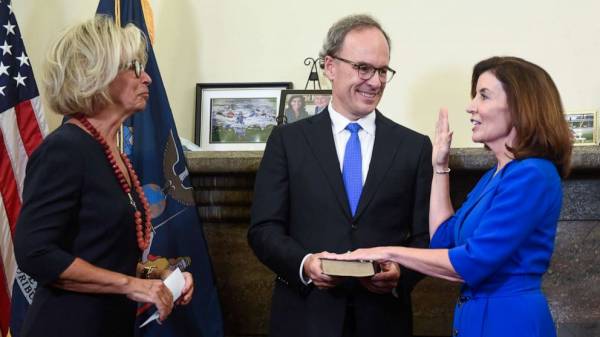 “Honored to be officially sworn in as New York’s 57th Governor,” Hochul tweeted from her new official governor account. The website for the governor of New York was also updated shortly after midnight.

Hochul was sworn in by the state’s chief judge, Janet DiFiore, in a private ceremony at the state capitol in Albany. A public swearing-in ceremony will be held for Hochul at 10 a.m. Tuesday in the Red Room of the state capitol building, though she wasted no time in announcing the first two appointments of her administration, picking Karen Persichilli Keogh, a former senior aide to Hillary Rodham Clinton, as secretary to the governor and Elizabeth Fine, executive vice president and general counsel of Empire State Development (New York’s economic development agency), as counsel to the governor.

Hans Pennink/APNew York Chief Judge Janet DiFiore, left, swears in Kathy Hochul, right, as the first woman to be New York’s governor while her husband Bill Hochul holds a bible during a swearing-in ceremony in the Red Room at the state Capitol, early Tuesday, Aug. 24, 2021, in Albany, N.Y.

In a blistering farewell address to constituents on Monday, now former Gov. Andrew Cuomo blasted the state attorney general’s five-month investigation that found he sexually harassed multiple women, calling it a “political firecracker” that triggered an “unfair and unjust” rush to judgment against him.

The 63-year-old Cuomo later submitted his resignation in a letter Monday to Senate Majority Leader Andrea Stewart-Cousins and Speaker of the Assembly Carl Heastie, effective at 12 a.m., Aug. 24. “I hereby tender my resignation for the office of Governor of the State of New York,” Cuomo wrote. “It has been my pleasure to serve with you both.”

But in an address, Cuomo used the opportunity to slam the allegations against him and tout his accomplishments as governor.

“Let me say now that when government politicizes allegations and the headlines condemn without facts, you undermine the justice system and that doesn’t serve women and it doesn’t serve men or society,” Cuomo said. “I understand that there are moments of intense political pressure and media frenzy that cause a rush to judgment, but that is not right. It’s not fair or sustainable. Facts still matter.”

Cuomo, who has insisted he did not touch anyone inappropriately, announced his resignation on Aug. 13, ten days after State Attorney General Letitia James made public the results of an investigation she alleged found the governor sexually harassed multiple women, including current and former state employees, and had retaliated against one of his accusers.

Andrew Kelly/ReutersPeople walk by as a farewell speech by New York Governor Andrew Cuomo is broadcast live on a screen in Times Square on his final day in office in New York City, Aug. 23, 20201.

“A firecracker can start a stampede, but at one point everyone looks around and says, ‘Why are we running?'” The truth is ultimately always revealed,” Cuomo said. “The attorney general’s report was designed to be a political firecracker on an explosive topic and it worked. There was a political and media stampede but the truth will (come) out in time. Of that I am confident.”

Cuomo also sought to establish a legacy beyond the allegations that drove him from office, saying, “No governor in the nation has passed more progressive measures than I have.” He listed his accomplishments, including a refurbished LaGuardia Airport, a new Penn Station transportation terminal in New York City and marriage equality as cornerstones to what he called a “new paradigm of government that actually works.”

He offered advice for the pandemic that made him a national figure for the empathy and seriousness he showed during his daily press briefings on the crisis. And he reminded listeners that under his leadership, “We faced up to the facts and we made the tough but necessary decisions.”

Cuomo acknowledged that Hochul would become governor and said, “I believe she will step up to the challenge.”

But he returned to the scandal that has led to his dramatic downfall.

“Now there are moments in life that test our character, that asks us are we the person we believe we are or are we the person we try to be at our best. You know me, I am a fighter and my instinct is to fight this because it is unfair and unjust in my mind,” Cuomo said.

“But you also know that I love New York and I serve you,” he said. “That is the oath that I took. And in this moment, I believe the right thing is that my service comes first. Prolonging this situation could only cause governmental paralysis and that is just not an option for you and not an option for the state, especially now.”

He began his last day on the job Monday with his top aid releasing a statement on his behalf, saying Cuomo “has no interest in running for office again.”

Melissa DeRosa, secretary to the governor, issued a statement on Cuomo’s immediate plans when he leaves the job he claimed a decade ago, one once held by his late father, Mario Cuomo.

DeRosa said that Cuomo has spent nearly 25 years in public service, from being secretary of Housing and Urban Development in the Clinton administration in the 1990s to getting elected state attorney general in 2006 and serving as governor since 2010.

“And the way he does it, it’s 24 hours a day, 7 days a week,” said DeRosa, whose resignation on Aug. 8 as the most powerful unelected bureaucrat in state government will also take effect Monday night. “He looks forward to spending time with his family and has a lot of fishing to catch up on. He is exploring a number of options, but has no interest in running for office again.”

Over the weekend, Cuomo sought to show he was in control until the end as he presided over briefings on Tropical Storm Henri. He requested his emergency management team remain in place and said Hochul had been briefed despite her absence from the news conferences.

Attempting to keep reporters “on topic,” Cuomo asked that questions be limited to the storm.

The first question he took was whether he still planned to resign on Monday.

Unlike Cuomo, who honed his political instincts at the hip of his father, Hochul’s political career began on a town council in Western New York. She briefly served in Congress and has been lieutenant governor for seven years.

Among Hochul’s first tasks will be appointing a new lieutenant governor, and she has said it would be someone from a New York City borough. She has signaled there would be “turnover” from the Cuomo administration, particularly among those in the Executive Chamber that were named in the state attorney general’s report as enabling Cuomo’s alleged harassment.

“I’m looking forward at the right time to introducing the members of my administration,” Hochul said.

Another priority is the pandemic and repopulating the depleted ranks of the state’s health department.

Hochul said the state has the authority to mandate masks in schools statewide and has said she believes “we will need mask mandates for children to go back to school … and that will have to be universal, it will be statewide.”

Previous : Wisconsin’s Democratic Senate primary could be referendum on Biden
Next : US WWII veteran reunites with Italians he saved as children