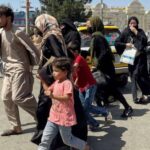 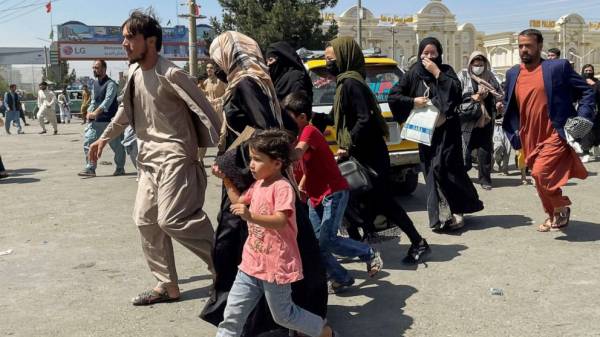 It was on the third attempt that “Khan,” his pregnant wife and their 3-year old son made to get to Kabul’s international airport — the most harrowing yet — when they were finally successful.

Khan, whose real name ABC News is not using for his security, made it on a U.S. military flight out of Afghanistan on Wednesday, according to his U.S. lawyer, fleeing the Taliban takeover and the threats its fighters had made against him for years because of his service to the U.S.

Tens of thousands of Afghans remain behind in anguish and fear. The Biden administration has promised to evacuate “as many Afghans as we possibly can for as long as we can,” in the words of State Department spokesperson Ned Price, but the task remains immense and chaotic — not least because Taliban fighters continue to block access to the airport.

Stringer/ReutersPeople try to get into Hamid Karzai International Airport in Kabul, Aug. 16, 2021.

It’s unclear how many Afghans the administration is committed to evacuating, where they will be brought to safety and who qualifies for a coveted seat on military and chartered flights.

MORE: Afghans who worked for US plea for help after Biden announces exit

Khan, a computer scientist by training who worked for a U.S. defense contractor alongside his brother “Mohammad,” had spent years waiting for a special immigrant visa.

After waiting 10 years for a visa, Mohammad finally learned last December that he was granted approval. Less than a month later, he was gunned down on his way to work, his 10-year old son by his side in the car.

Khan was supposed to travel with them but had to run errands that morning in January. He has spent recent months in hiding, receiving death threats by phone and text message and waiting for his family’s special immigrant visas to be finalized.

On Saturday, hours before the U.S. Embassy in Kabul closed its doors, he and his family were able to pick up their visas.

But that is only half the battle. For U.S. citizens and Afghans with visas, reaching the airport and getting inside has been a nearly impossible task.

AFP via Getty ImagesAfghan nationals cross the border into Pakistan at the Pakistan-Afghanistan border crossing in Chaman, Aug. 18, 2021.

The State Department has informed a all American citizens and some Afghan visa holders to travel to the airport, warning in capital letters that they “cannot guarantee your security as you make this trip,” according to the embassy email notice obtained by ABC News.

Khan and his family made their first attempt on Sunday and tried again Tuesday, but there were too many Taliban fighters pushing back crowds to even get close.

On Wednesday, they tried a different approach, nearing a gate on the north side. But there, they encountered U.S. troops trying to disperse crowds by shooting into the air and using tear gas, according to Khan’s U.S. lawyer Julie Kornfeld from the International Refugee Assistance Project, or IRAP, who was FaceTiming with him during the episode.

Pentagon spokesperson John Kirby confirmed Wednesday that American troops providing security at the perimeter fired their weapons in the air as part of “crowd control measures.”

MORE: American and Afghan 'brothers' plead for help for those left behind to Taliban offensive

Kornfeld and IRAP have filed several petitions to order the State Department to evacuate all Afghans who have applied for special immigrant visas and their families — some 100,000 Afghans in total, the legal advocacy group estimates.

“The timing could not be more urgent. Now that the Afghan government has collapsed and the Talban have taken over, time is quickly running out. We need to get as many people on flights out of the country before it is too late, and the U.S. has a legal and a moral obligation to do so,” said Becca Heller, IRAP’s executive director.

Heller called on the U.S. government to secure safe passage to Kabul’s airport for Americans and Afghans like Khan. National security adviser Jake Sullivan said Tuesday that the U.S. had an agreement with the Taliban to ensure safe passage, but several Afghans on the ground have told ABC News they have been blocked. In some cases, Taliban fighters beat back crowds with chains or by firing sporadic gunfire into the air.

But with their visas in hand, Khan and his family were determined to get through to the airport, according to Kornfeld, who told ABC News, “Ultimately, it was his persistence that got them in.”

In the hours when it seemed like it wouldn’t happen, Kornfeld said they considered other options, including Khan leaving his pregnant wife and son behind to see if he could push ahead and come back to get them — an agonizing decision, she said.

“It’s a dynamic situation. Things are rapidly changing on the ground, and one client’s success story of where the access points are is not going to hold up,” Kornfeld added.

Rahmat Gul/APTaliban fighters patrol in the Wazir Akbar Khan neighborhood in the city of Kabul, Afghanistan, Aug. 18, 2021. The Taliban declared an “amnesty” across Afghanistan and urged women to join their government, seeking to convince a wary population that they have changed a day after deadly chaos gripped the main airport as desperate crowds tried to flee the country.

Once inside, the process was more efficient, she added, with two of her clients and their families on flights within 30 minutes of entering the airport and being processed. Sullivan said Tuesday that since the U.S. military was able to secure the airport late Monday, more evacuation flights have been flowing in “one after another, hot unloading and hot offloading,” he told reporters.

But outside the airport, chaos continues to reign.

An alert from the U.S. embassy late Wednesday advised U.S. citizens and lawful permanent residents, or green card holders, they “should consider” travelling to the airport — sparking crowds of people rushing there again.

MORE: Few answers from Biden administration on Afghanistan despite pressure: The Note

Crowds broke into the compound on Monday, rushing the tarmac and surrounding a U.S. military aircraft that was preparing for takeoff. Several civilians died in the incident, and the U.S. military eventually had to clear 15,000 people from the tarmac, according to a defense official.

“The unwillingness of the U.S. government to protect our allies after they sacrificed their safety and in many cases their lives is a historically unprecedented failure that only a sustained attempt to hold the airport and meaningfully evacuate people can begin to remedy,” said Heller.

The U.S. has surged diplomatic personnel, doubling the number of consular officers and dispatching former ambassador to Afghanistan John Bass to the airport to coordinate the chaotic evacuation effort even as all but a core team from the U.S. embassy were evacuated from the compound Tuesday.