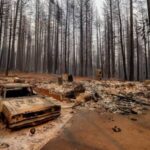 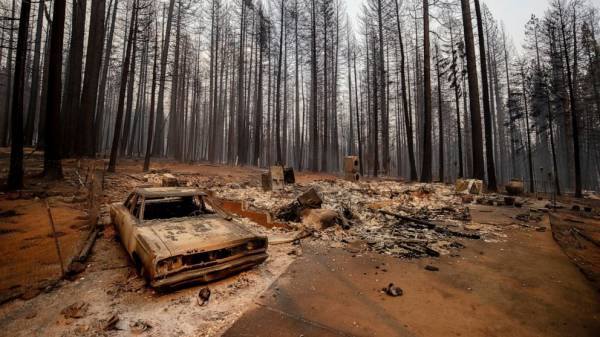 POLLOCK PINES, Calif. — Record-setting blazes raging across Northern California are wiping out forests that are central to plans to reduce carbon emissions and are testing projects designed to protect communities from wildfires, the state’s top fire official said Wednesday, hours before a fast-moving new blaze erupted.

Fires that are “exceedingly resistant to control” in drought-sapped vegetation are on pace to exceed the amount of land burned last year — the most in modern history — and having broader effects, said Thom Porter, chief of the California Department of Forestry and Fire Protection.

What started as a grass fire Wednesday afternoon swiftly blew up to threaten the city of Clearlake, spurred by winds up to 30 miles per hour (48 kilometers per hour). The sheriff warned there was an “IMMEDIATE threat to life and property” in the city about 80 miles north of San Francisco.

Television images showed rows of destroyed homes on at least two blocks as crews doused water on burning houses nearby. Children were rushed out of an elementary school as a field across the street burned. Authorities reported the fire at 1 p.m. and within an hour dozens of homes had burned.

Lake County Sheriff Brian Martin told KGO-TV that some people have been reluctant to leave.

“This isn’t the fire to mess around with,” he said.

The largest current fire in the West, known as the Dixie Fire, is the first to have burned from east to west across the spine of California, where the Sierra Nevada and Cascade mountains meet, the state’s fire chief said.

It was also one of several massive fires that have destroyed areas of the timber belt the state was counting on to store carbon dioxide to meet its climate initiative goals.

“We are seeing generational destruction of forests because of what these fires are doing,” Porter said. “This is going to take a long time to come back from.”

Fires mostly across the northern part of the state continued to threaten thousands of homes, force new evacuations and led Pacific Gas & Electric to cut power to tens of thousands of customers to prevent utility equipment from sparking fires amid strong winds.

One of the most recent infernos, the Caldor Fire, continued to grow explosively southwest of Lake Tahoe, covering 84 square miles (217 square kilometers) after ravaging Grizzly Flats, a community of about 1,200.

Dozens of homes burned, according to officials, but tallies were incomplete. Those who viewed the aftermath saw few homes standing in the forest. Lone chimneys rose from the ashes, rows of chairs were all that remained of a church and burned out husks of cars littered the landscape.

Chris Sheean said the dream home he bought six weeks ago near the elementary school went up in smoke. He felt lucky he and his wife, cats and dog got out safely hours before the flames arrived.

“It’s devastation. You know, there’s really no way to explain the feeling, the loss,” Sheean said. “Maybe next to losing a child, a baby, maybe. … Everything that we owned, everything that we’ve built is gone.”

All 7,000 residents in the nearby community of Pollock Pines were ordered to evacuate Tuesday. A large fire menaced the town in 2014.

Time lapse video from a U.S. Forest Service webcam captured the fire’s extreme behavior as it grew beneath a massive gray cloud. A ceiling of dark smoke spread out from the main plume that began to glow and was then illuminated by flames shooting hundreds of feet in the sky.

John Battles, a professor of forest ecology at the University of California, Berkeley, said the fires are behaving in ways not seen in the past as flames churn through trees and brush desiccated by a megadrought in the West and exacerbated by climate change.

“These are reburning areas that have burned what we thought were big fires 10 years ago,” Battles said. “They’re reburning that landscape.”

The wildfires, in large part, have been fueled by high temperatures, strong winds and dry weather. Climate change has made the U.S. West warmer and drier in the past 30 years and will continue to make the weather more extreme and wildfires more destructive, according to scientists.

Battles said the fires have created a vicious cycle for trying to reduce global warming. Burning increases carbon emissions while also destroying trees and other ground cover that can absorb the greenhouse gas. Dead trees will continue to release carbon they once stored.

The fire is burning along the U.S. Route 50 corridor, one of two highways between Sacramento and Lake Tahoe. The highway through the canyon along the South Fork of the American River has been the focus of a decades-long effort to protect homes by preventing the spread of fires through a combination of fuel breaks, prescribed burns and logging.

“All of that is being tested as we speak,” Porter said. “When fire is jumping outside of its perimeter, sometimes miles … those fuel projects won’t stop a fire. Sometimes they’re just used to slow it enough to get people out of the way.”

In the Sierra-Cascades region about 100 miles (161 kilometers) to the north, the month-old Dixie Fire expanded by thousands of acres to 993 square miles (2,572 square kilometers) — two weeks after the blaze gutted the Gold Rush-era town of Greenville. About 16,000 homes and buildings were threatened by the Dixie Fire, named for the road where it started.

“It’s a pretty good size monster,” Mark Brunton, a firefighting operations section chief, said in a briefing. “It’s going to be a work in progress — eating the elephant one bite at a time kind of thing.”

The Caldor and Dixie fires are among a dozen large wildfires in the northern half of California.

While most of the fires this year have hit the northern part of the state, Southern California has been largely spared and even experienced rare drizzle and light rain Wednesday.