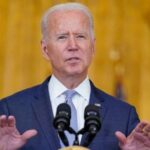 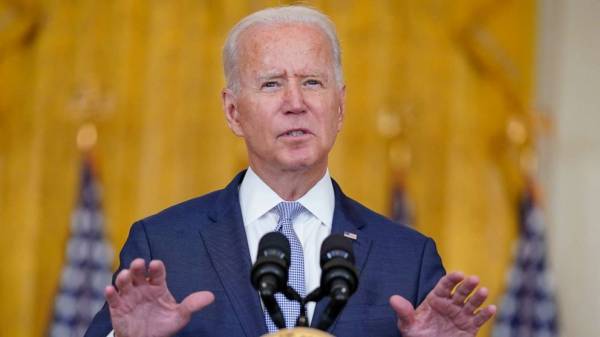 As the situation in Afghanistan continues to deteriorate and criticism mounts over the Biden administration’s handling of the U.S. troop withdrawal from the country after the 20-year war, President Joe Biden has kept a low profile.

Spending the day in Wilmington, Delaware, before departing for Camp David, a presidential retreat, Biden has no public events on his schedule as he resumes what was supposed to be a week of vacation and the president did not stop to speak with reporters as he and first lady Jill Biden departed Wilmington Friday afternoon.

Biden was scheduled to receive his presidential daily briefing at 10 a.m. Friday, though the White House did not say if Biden had received additional briefings on Afghanistan Thursday evening or Friday.

A senior administration official said Biden would continue to be engaged on the issue and stay in close contact with his team about the situation Thursday afternoon.

AFP via Getty ImagesTaliban fighters are pictured in a vehicle of Afghan National Directorate of Security (NDS) on a street in Kandahar on Aug. 13, 2021.

In the hours surrounding the U.S.’s decision Thursday to send 3,000 troops into Afghanistan to assist the drawdown of the embassy in Kabul, Biden did not engage publicly on the issue.

Delivering remarks about his plan to lower prescription drug prices Thursday — his only public event before departing for Delaware — the president ignored a shouted question from the press as he left the East Room.

“Is Afghanistan lost?” someone had yelled.

Behind the scenes, Biden was briefed by Secretary of Defense Lloyd Austin and National Security Advisor Jake Sullivan on the worsening situation in Afghanistan Thursday morning. It followed a meeting Biden held with principals Wednesday night, tasking them to come up with recommendations for next moves, according to a senior administration official.

After they met Thursday morning to review the recommendations, Biden gave the order to move forward with the new plans. The president separately spoke with Secretary of State Antony Blinken Thursday to discuss a diplomatic strategy, the official added.

The administration is on defense over its handling of the situation, saying it was not caught off guard or surprised at the speed of the Taliban’s advancement, arguing that there were a number of contingencies in play.

But according to a U.S. official, the precarious Afghan control over major cities growing more tenuous over the last day was a significant factor in Biden’s decision to go forward with the reduction in staffing and the new military mission.

And just over a month ago, the president doubted the country would fall to Taliban control.

“The likelihood there’s going to be the Taliban overrunning everything and owning the whole country is highly unlikely,” he told reporters on July 8.

The conditions for total withdrawal from Afghanistan were initially put in place by President Donald Trump. In February 2020, the Trump administration struck a deal with the Taliban under which the U.S. would pull out all of its troops from Afghanistan by May 1 if the Taliban met certain requirements, including refraining from attacks on U.S. forces.

In April, Biden announced his intention to withdraw all troops from Afghanistan before the 20th anniversary of the Sept. 11 attacks because it was “time to end America’s longest war.”

Akhter Gulfam/EPA-EFE/ShutterstockPeople stranded at the Pakistani-Afghan border wait to cross the border after it was reopened at Chaman, Pakistan, on Aug. 13, 2021.

“We will not conduct a hasty rush to the exit. We’ll do it responsibly, deliberately, and safely,” Biden said of the plan.

But in the months since that announcement, the U.S. has struggled to follow through on that promise. U.S. forces departed Bagram Air Field, its de facto headquarters in Afghanistan, in the middle of the night, without notifying Afghan commanders, Afghan military officials said.

MORE: 2,500 Afghan visa seekers, families to be housed at US military installation

The White House did not announce a plan to evacuate Afghan interpreters and contractors who have aided U.S. forces and diplomats, and who are now targets of the Taliban for their work, until July. While some flights for these Afghans to the U.S. have begun, thousands remain stranded in Afghanistan.

“Please send my word to the officials, if they don’t evacuate us there will be a slaughter. I have no idea what to do. I need help to leave this country or I will be dead, I need evacuation. I need help!” one Afghan interpreter wrote in a note shared with ABC News.

House Speaker Nancy Pelosi has requested a full House briefing on Afghanistan when the House returns to session Aug. 23, and congressional Republicans issued a swift rebuke of Biden.

Evan Vucci/AP PhotoPresident Joe Biden speaks about prescription drug prices and his “Build Back Better” agenda from the East Room of the White House, Aug. 12, 2021, in Washington.

“President Biden’s strategy has turned an imperfect but stable situation into a major embarrassment and a global emergency in a matter of weeks. President Biden is finding that the quickest way to end a war is to lose it. The costs and ramifications will echo across the world,” Senate Minority Leader Mitch McConnell said in a statement Thursday night.

Still, even as reports of the deteriorating situation in the region emerged this week, Biden stood by his decision to withdraw all troops.

“Look, we spent over a trillion dollars — over 20 years we trained and equipped with modern equipment over 300,000 Afghan forces. And Afghan leaders have to come together. We lost thousands — lost to death and injury thousands of American personnel. They’ve got to fight for themselves. Fight for their nation.”

“[W]e are continuing to keep our commitment. But I do not regret my decision,” he added.