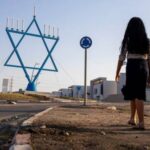 Despite calm, Israeli town copes with scars of rocket fire 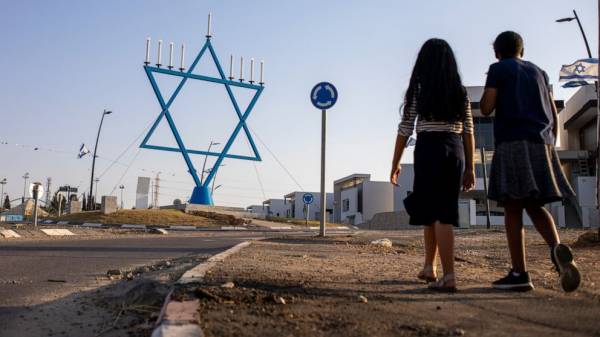 SDEROT, Israel — Just three months after the latest war between Israel and Hamas militants in the Gaza Strip, the border town of Sderot appears to be on the road to recovery.

The streets are bustling, and the town is filled with well-kept parks and playgrounds. The local real-estate market is booming.

But underneath the veneer of normalcy, the scars of years of rocket fire run deep.

Metal rocket fragments are on display outside the main police station, as a museum of sorts. Next to every park and bus stop is a small concrete bomb shelter — often decked out with colorful murals and street art. An Iron Dome rocket defense battery sits on the eastern edge of town, a few hundred meters (yards) from a new apartment complex.

Some Sderot residents say they jump at the smallest noise. Parents report children still wetting their beds or being too scared to sleep alone.

Noam Biton says she has enjoyed a normal childhood in Sderot. But the 16-year-old high school student says it hasn’t always been easy. One of her strongest memories was an air-raid siren that sounded while she was attending a bar mitzvah celebration on what had been a quiet day.

“We lay on the ground, three of us,” she said. “The only thing protecting us was a car.” The rocket landed nearby, spraying shrapnel in the area.

Outgoing and active in her local scout troop, Biton says she is always careful to sit next to the door when she rides the bus — just in case there is an air-raid siren and she needs to evacuate quickly.

Her mother Dvora, a lifelong resident, says uncertainty is a constant companion. “It saddens you that at any moment someone controls your life,” she said. “We can’t escape.”

Israel and Hamas, an Islamic militant group that opposes Israel’s existence, have fought four wars and numerous skirmishes since Hamas seized control of Gaza in 2007, a year after winning a Palestinian election.

It is impossible to compare conditions in Gaza and in southern Israel. Israeli strikes have killed some 4,000 Palestinians, including hundreds of civilians, in the four wars and inflicted heavy damage on Gaza’s infrastructure. Tens of thousands of people, unable to flee the impoverished and blockaded territory, suffer from deep psychological wounds.

Israelis are now protected by a rocket-defense system, have the option of temporarily escaping rocket range and have access to psychological counseling and government support. Still, over 100 people have died on the Israeli side in the four wars, while heavy rocket fire has brought life to a standstill for millions of people during times of fighting. Even during times of quiet, rocket fire can erupt at any moment without warning.

No place in Israel has been hit harder by Palestinian rocket fire than Sderot, a working-class community just about 1.5 kilometers (1 mile) from the Gaza border. Yet two decades after the first rudimentary rockets landed in town, experts are still struggling to figure out their long-term effects on a generation of parents and children who have come of age in this traumatic environment.

“People who are living in the south of Israel live with the understanding that it’s just a question of time until the next time,” said Talia Levanon, director of the Israel Trauma Coalition.

“You are literally trying to heal from the last time while preparing for the next time, which makes our job very, very tough,” she said.

Levanon’s nonprofit operates a series of “resilience centers” throughout southern Israel that provide a variety of services, including counseling and workshops for families and communities.

In an indication of how widely people have been affected, she said that during a brief round of violence in 2019, nearly two-thirds of the area’s 60,000 residents received services from a resilience center.

The 11-day war between Israel and Hamas in May was the latest reminder of Sderot’s precarious position. Nearly 300 rockets were fired at Sderot, according to the municipality. Despite the protection of the Iron Dome, 10 rockets scored direct hits on buildings — including a strike that killed a 5-year-old boy.

Sderot residents often use the word “resilience” when describing the community. And in many ways, Sderot appears to be thriving.

Once known as a dusty backwater in Israel’s Negev desert, it has evolved into a bustling town of some 27,000 people, with new apartment complexes and expensive villas seeming to pop up in any piece of open space. It has a heavily fortified train station linking it to major cities. There are shopping centers, bars and restaurants popular with students from a college in town.

Researchers say that people who grow up here tend to remain in the area as adults, out of pride and a strong connection to its tight-knit community.

Yaron Sasson, spokesman for the local government, said veteran residents and newcomers are drawn by special tax breaks, generous services made possible by government support and overseas donors as well as the small-town feel. At a time when much of the country is now within rocket range, he said Sderot is even seen as relatively safe, thanks to its many bomb shelters and reinforced schools and kindergartens.

Yet according to the trauma coalition, residents suffer from a wide range of symptoms. Teens suffer from higher rates of diabetes, aggression and hypertension than their counterparts in other communities.

Anxiety, depression, sleeping difficulties and general exhaustion are common symptoms among adults, and researchers only now are beginning to study the effects of growing up in Sderot on young parents’ child-rearing skills. Another question is how Sderot’s youths — who are frequently spooked by loud noises — can perform in the military, a compulsory rite of passage for most Jewish Israelis.

Dvora Biton said that whenever she goes out in the car, she plans a route that will take her past any of the dozens of bomb shelters scattered throughout town. The car window is always open, the volume on the radio is kept low and the pantry is filled with canned goods. Any loud sound, even a popping balloon, makes her jump.

“It’s something that you think about 24 hours a day,” she said. “You can’t escape it, even when you are sleeping.”

Fifteen years ago, before there was the Iron Dome, a rocket landed outside the family’s home, leaving a metal fragment embedded in her front door. Biton left the fragment in the door for years, only recently finding the strength to remove it during a home renovation.

“I wanted to leave it there as a reminder that we live in an unhealthy reality,” she said. “But on the other hand, there is a feeling you want to be released from these things.”