When Will January 6th Be Over?

After Donald Trump lost the Presidential election last year, a law professor named John Eastman drafted, for Trump’s use, a two-page manual for unlawfully throwing out the electoral votes of certain states as they were being tallied in Congress, on January 6th. The name he mentions most often in the memo is that of Vice-President Mike Pence. It appears in such statements as “Pence then gavels President Trump as re-elected” and, regarding disrupting the count, “The main thing here is that Pence should do this without asking for permission.” Eastman also spoke at Trump’s January 6th rally, where he said that what “we are demanding of Vice-President Pence” is that he intervene in the electoral count. Trump, speaking shortly afterward, cited Eastman’s authority when he said, “If Mike Pence does the right thing, we win the election.” 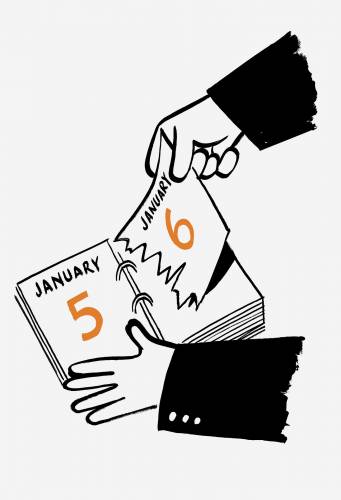 Soon afterward, the assault on the Capitol began, and, once it became clear that the Vice-President was not going to do what Trump and his allies demanded, a group of insurrectionists chanted “Hang Mike Pence.” Members of the Pence family were also in the Capitol, and in danger. Eastman is expected to be subpoenaed in the coming days by the House select committee investigating the events surrounding January 6th. In addition to writing that memo, and a revised, more detailed one—in which he declares that letting the results stand would mean that Americans were no longer “a self-governing people”—he attended a meeting with Trump and Pence in the Oval Office on January 4th. (Eastman says that he ultimately advised Pence to delay the count, not to stage a coup.) An area of inquiry for the committee is how much pressure Trump put on Pence to help him overturn the election. (A lot, it seems.)

But one person who doesn’t appear eager to dwell on that question, at least not publicly, is Pence himself, who has been biding his time giving speeches and setting up an organization called Advancing American Freedom. Last month, in an interview with Sean Hannity, on Fox News, he said that the media is trying to use January 6th to distract from President Biden’s “failed agenda” and to “demean the character and intentions” of people who voted for Trump. He assured Hannity that he and Trump had “parted amicably” after leaving office, and had stayed in touch. On social media and in a podcast he has launched, he steadily repeats the phrase “Trump-Pence Administration”—linking his name with that of a man who was ready to abandon him to a mob.

Pence’s position is intriguing on a human level, but it is significant in political terms, too, because it captures so much about the state of the G.O.P., where the 2024 Presidential race is headed, and how much the contest over the legacy of January 6th matters in setting that course. Trump seems to realize that as much as anybody. After Pence appeared on Fox News, Trump put out a statement saying that the interview “very much destroys and discredits the Unselect Committees Witch Hunt on the events of January 6th.” The interview does not do that, of course. But the Trump-Pence dance underscores how high the stakes are for the committee. Trump, in trying to obstruct the investigation into January 6th—with spurious claims of executive privilege, for example—is fighting not only to impose his view of the past but to insure his political future.

A simple explanation for Pence’s complacency is that he wants to run for President himself, and can’t afford to alienate Trump if he is to have any hope of making it through the primaries. According to a recent poll, Trump’s favorability rating among Republicans is eighty-six per cent. His Save America PAC, the new Make America Great Again, Again! super PAC, and ancillary political funds have raised more than a hundred million dollars. But Trump may not want to help anyone but Trump. In September, when asked by Fox News if he would run, he said, “It is getting to a point where we really have no choice.” It’s hard to know whom he means by “we.” In a Morning Consult/Politico poll that asked Republicans whom they would support out of more than fifteen potential candidates for 2024, forty-seven per cent chose Trump. Pence came next, with just thirteen per cent. Close behind Pence was Ron DeSantis, the governor of Florida and a Trump ally, with twelve per cent. (Six per cent chose Donald Trump, Jr.—twice as many as picked Senators Ted Cruz or Marco Rubio.) When Trump was asked recently, in an interview with Yahoo Finance, what he thought of DeSantis’s Presidential prospects, he said, “If I faced him, I’d beat him like I would beat everyone else.” But Trump didn’t believe it would come to that. He said he thought that, if he ran, “most people would drop out, I think he would drop out.”

Trump may be right. Nikki Haley, the former governor of South Carolina, criticized him in straightforward terms after January 6th; in February, she told Politico that the Party had been wrong to follow him. A few weeks ago, she told the Wall Street Journal, “We need him in the Republican Party.” She also said that, if “there’s a place for me” in the 2024 race, “I would talk to him and see what his plans are. . . . We would work on it together.” Perhaps she was hinting at the Vice-Presidential spot; it’s extraordinary to think that there are people who would like to be the next Mike Pence. One wonders if candidates for the job would be given copies of Eastman’s memos and asked to check off the unconstitutional moves that they would be willing to make.

Far from being a witch hunt, the investigations into January 6th have continued to uncover unsettling material concerning Trump’s efforts to overturn the election. (The Senate Judiciary Committee reported last month on his attempts to enlist officials in the Department of Justice in that cause.) There’s no shortage of reminders that he hasn’t moved on. Last week, the Wall Street Journal published a lengthy letter to the editor from Trump, full of baseless claims that the vote count in Pennsylvania was wrong. “The election was rigged, which you, unfortunately, still haven’t figured out,” he informed the Journal. In a statement a week earlier, he spoke in even more strident terms: “The insurrection took place on November 3, Election Day. January 6 was the Protest!”

There can hardly be a better example of why a clear accounting of the events leading up to the assault on the Capitol is so crucial. According to Trump, the real insurrection was never put down. January 6th, in that sense, is a long way from over. ♦

Previous : The Scent of Spices, and Vegan Pho, at Bánh
Next : The complicated promise of Amazon’s space internet