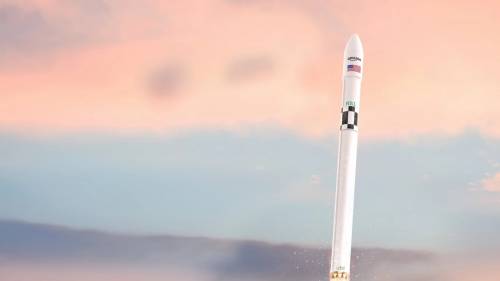 At the top of an Amazon press release sent out this week, there’s an uncanny image. It’s a rocket imprinted with an American flag and, above that, Amazon’s smiling logo, blasting off to the heavens. The company is officially taking its business to space, and Jeff Bezos isn’t even providing the ride.

Amazon recently announced that, by the end of next year, a startup called ABL Space Systems would deliver two prototype satellites for Project Kuiper, the company’s effort to build a low-Earth orbit, or LEO, satellite constellation that can beam internet connectivity down to Earth. Amazon says it will eventually deploy 3,236 such satellites “that will provide fast, affordable broadband to unserved and underserved communities around the world.” It doesn’t hurt that becoming a space-based internet service provider could also help grow the company’s cloud computing business, Amazon Web Services (AWS), and Amazon says that the satellites will work with Verizon to deliver LTE and 5G service to hard-to-reach places.

It’s hard to argue with the idea of getting more people online. In some parts of the world, broadband access is a human right. But if you’re worried about Amazon’s growing dominance over everything, it might seem daunting that one of the world’s most powerful companies is launching satellites into space and will soon be directing internet traffic all over the planet. Plus, thanks to AWS, the new satellite-based internet business is bound to succeed. As Babak Beheshti, dean of the College of Engineering and Computing Sciences at the New York Institute of Technology, told me last year, “Amazon is, essentially, effectively going to be its own biggest customer to really prime the pump for the revenue stream.”

But given the history of telecom monopolies here on Earth, it might actually not be such a bad thing that more companies are joining the internet space race.

“Increasing competition in the market over the next few years is likely to drive innovation that will lead to an increase in the quality of service and, ideally, more affordable prices,” said Mark Buell, the North American regional vice president for the Internet Society, an international advocacy organization for open development and use of the internet.

Amazon isn’t alone in the mission to create a fast and resilient internet service using satellite constellations. Starlink, a SpaceX project, already has more than 1,700 satellites in low-Earth orbit, and the company says it has about 90,000 people currently testing the service, each paying $99 a month (plus a $499 fee for the satellite dish) for the privilege. OneWeb, a British company that emerged from bankruptcy a year ago, has over 350 satellites in orbit now, about half the total it plans for its constellation.

The idea behind all of these services is relatively simple, as far as space stuff is concerned. A ground station with a fiber connection beams data up to the satellite constellation and the satellites beam data back down to customers. Despite literally going to space and back, the connections can be fast, too. Project Kuiper says its prototype delivered speeds of up to 400Mbps, far faster than the average broadband speed in the United States. And because the connectivity is coming from the sky, practically anywhere on the planet can get internet service without the need to string wires over mountains, under the ocean, through the rainforest, or wherever the remote location may be. Amazon itself might be in a unique position to do this especially well.

“Providing telecommunications services is more than just launching satellites into space,” Buell said. “Infrastructure needs to be in place on the ground. Amazon has made considerable investments in fiber optic cables to connect its data centers — and, importantly, Amazon excels at logistics, which will be needed to manage more than 3,200 satellites.”

Getting more people online, in and of itself, is a completely valid goal for Amazon, but again, the company’s ambitions may extend beyond that. Last year, AWS completed construction on six ground stations as part of a new initiative to offer its customers easier access to control satellite communications and process satellite data. The business is called AWS Ground Station, naturally, and soon enough, it looks like Amazon will have its own satellites in orbit, potentially informing whatever services AWS decides to offer in the future.

That Amazon would be launching Project Kuiper not only to sell internet service to customers but also boost its AWS offerings is hardly a scandal, though. The commercial space industry is in its infancy, and there’s plenty of upside in figuring out the basic logistics of launching rockets and satellites into orbit and experimenting with what’s possible. That’s what Jeff Bezos has been doing since he stepped down earlier this year as CEO of the company he founded. His space company Blue Origin recently announced plans to build a “mixed-use business park” in orbit that would rent out parts of a space station for commercial use. The habitable satellite could go online by the time the International Space Station is retired, likely at the end of this decade.

Meanwhile, Elon Musk has been saying that he wants the revenue from Starlink to pay for his Starship project and missions to colonize other planets. The billionaire said in 2019 that the space-based broadband business is “a key stepping stone towards establishing a self-sustaining city on Mars and a base on the moon.” The Starship has already been selected as the vehicle for the Artemis missions, which plan to land humans on the moon as soon as 2024.

But neither SpaceX nor Blue Origin will be taking Amazon’s new satellites into space. It looks like the California-based startup ABL Space Systems, which specializes in carrying smaller payloads to orbit on top of cheaper rockets, offered Amazon a bargain. ABL Space Systems, which has not yet launched a rocket, says it can get nearly 1.5 tons of payload into low-Earth orbit on its RS1 rocket, the same one that will be carrying the Amazon Kuiper satellites, for $12 million per launch. A SpaceX Falcon 9 launch can cost up to $62 million. And Blue Origin seems to be more focused on launching celebrities into space.

What makes Project Kuiper and its competitors stand out doesn’t have much to do with who’s flying the rockets or going to Mars, or even how Amazon is launching a new business in space. For many, the success of these projects could mean the difference between having internet access and not having it. Currently, at least 21 million Americans don’t have access to quality broadband, according to the FCC, which means countless kids who can’t access online education tools and patients who can’t access telemedicine — among many other things. So if Amazon wants to get more people online, well, there’s a lot of upside for a lot of people. And for Amazon, a lot of potential new customers.

Previous : When Will January 6th Be Over?
Next : This may finally be the year Congress lets Medicare negotiate drug prices