The Scent of Spices, and Vegan Pho, at Bánh

As a little girl growing up in Vietnam, Nhu Ton—the chef at Bánh, a Vietnamese restaurant that opened in January, on the Upper West Side—was surrounded by the scent of spices. Ton’s family worked and lived in a vast open-air market, and in the mornings her nose frequently awoke to adults shelving bags of cinnamon, coriander, and lemongrass. “When I think about my childhood, I smell it first,” Ton told me. The long aromatic tails that the spices left on her memory now make their mark on Bánh’s menu. “I wanted to create the flavors that I craved,” Ton said. “Things that taste like the particular place where I grew up.” 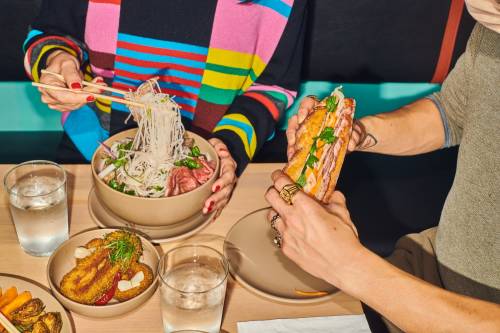 The pho broth at Bánh is simmered for hours and makes use of star anise, cloves, and cardamom.

One of those things is good Vietnamese coffee. Buôn Ma Thuột, Ton’s home town, is the capital of java in Vietnam, and the source of Bánh’s coffee beans. If you are wary of a bold brew, this is likely not the drink for you. But if you, like me, are a caffeine fiend with a taste for the rich and creamy, you will appreciate the buttery-sweet marriage of thick swirls of condensed milk to the dark, pungent roast.

On the varied menu, bún chả, a traditional barbecue-pork dish from Hanoi that features the meat prepared three ways, is a good place to start. A recent visit began with skewers of pork belly, steeped in a house marinade and smoked over charcoal. Then there were medallions of ground pork wrapped in betel leaf and submerged in a small bowl of fish sauce made faintly wine-like with rice vinegar and orange and lime juice. The most memorable of the three were the spring rolls; stuffed with pork, taro, and wood-ear mushrooms, the golden-brown parcels were encased in rice wrappers so diaphanous that their crispy crunch was like a wondrous sleight of hand: I heard the crackle, but my teeth didn’t sink into anything but pork. 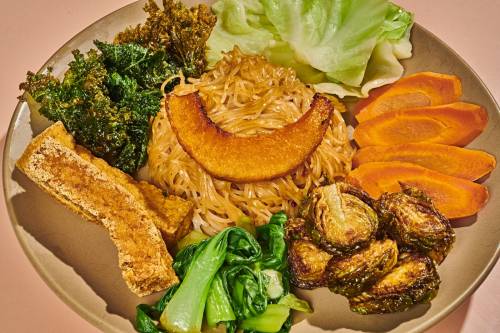 Ton remarked that, as a child, cooking didn’t appeal to her because it seemed time-consuming: no matter how busy Ton’s mother was with the shop, she cooked three times a day. Two decades on, Ton told me that she considers patience a necessary ingredient in most of her recipes. When I took my first spoonful of the pho at Bánh, I felt my senses come to attention; there was a vividness to the broth that could only have been coaxed into being through long hours of simmering and a timely deployment of star anise, cloves, and cardamom. “I need to get it to exactly the flavor I loved as a kid,” Ton told me. “So it’s always a process.” 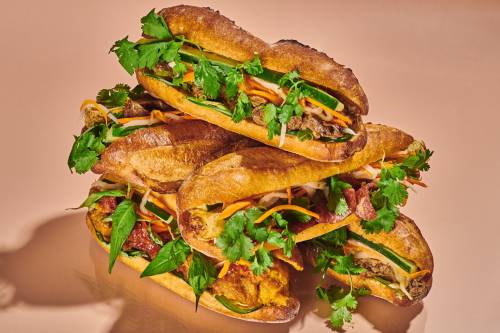 Ton says that she considers patience a necessary ingredient in most of her recipes.

For all her fidelity to the palate of her youth, Ton still rises to new challenges. When her mother adopted a vegan diet some years ago, Ton became determined to make a decent vegetable-only banh mi and pho. The solution to the vegan banh mi turned out to be basil pesto, peanut sauce for a silken texture, and smoked oyster mushrooms seasoned in soy sauce. Though a tad bland—one might wish for a squirt of hoisin sauce and a few jalapeños—the pleasingly charred mushrooms lend the sandwich a woody, umami edge.

Could pho ever be satisfyingly meat-free? With a vegan friend, I ordered the dry-style vegan pho with trepidation. The accompanying platter of pumpkin, Brussels sprouts, tofu, and bok choy was colorful, but we both knew it would come down to the side of broth. When it arrived, my companion took a single slurp, wrinkled his brow, and said, “Are you sure this is vegan? This tastes too good to be vegan.” When it was my turn to slurp, I understood his doubt immediately: instead of being watery and flat, this flavorful soup belonged to the same family as Bánh’s traditional pho—layered and complex in a way that makes you want to keep sipping on a cold autumn evening. How had Ton done it? She said that it probably had to do with the white pepper, the sesame oil, and the countless hours spent in the kitchen experimenting with a host of spices. Also, she knew not to stop working until her mother approved. (Dishes $10-$17.) ♦

Previous : Facebook is now Meta, but it’s not quite a metamorphosis
Next : When Will January 6th Be Over?