My first-ever solid take on Sophie Taeuber-Arp, the subject of a wonderful retrospective at the Museum of Modern Art, occurred nine years ago, by way of a survey, also at MOMA, of the genesis of abstract art, circa 1910-25. Until then, I had regarded the Swiss virtuoso of many crafts lightly. But on that occasion, which featured such heavy hitters of the aesthetic revolution as Kandinsky, Mondrian, and Malevich, I kept coming back to a smallish wool embroidery of rectangular forms, “Vertical-Horizontal Composition” (1916), by Taeuber-Arp. Beautiful, utterly assured, and ineffably heartfelt, it made the artist’s associates, nearly all male, seem relative louts, worked up about innovations that were a breeze for her. That the medium was “woman’s work” by the standards of the time added to my startlement, upending the lazy pejorative. No doubt feminism’s revaluing of historic values had sensitized me. Good is good whether accomplished with a brush or with a needle.

Now here the embroidery is again, like an old friend, in “Sophie Taeuber-Arp: Living Abstraction.” The show tracks the artist’s multifarious achievements, under the radar of ruling styles, until her death, in 1943, when she was fifty-three years old. The work’s nubbly, asymmetrically structured bars and swatches in white, black, red, blue, gray, and two browns generate a seemingly effortless majesty. The execution secretes bits of fun that I hadn’t noticed before: a minuscule, eccentric off-colored shape in a brown field; an almost imperceptible checkerboard pattern of alternating horizontal and vertical stitches in a black area (prophetic of the black-on-black paintings of Ad Reinhardt); and a small lump of congested yarn that would seem to be a flaw if it did not so candidly emphasize the work’s tactility. No matter how committed she could be to geometric order, Taeuber-Arp communicated her freedom. 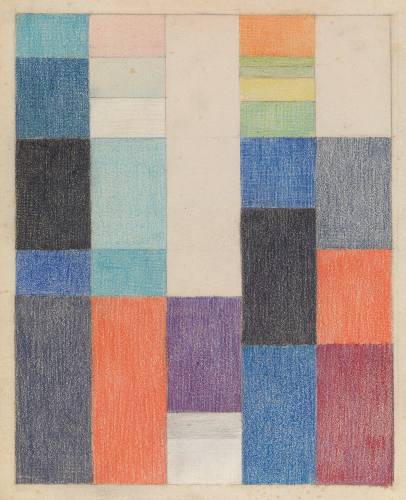 Sophie Taeuber was the fourth child of a pharmacist father and a mother who ran a linen-goods store in Davos. After her father died, of tuberculosis, when she was two, her mother boarded students at their home in the mostly German-speaking town of Trogen. Taeuber studied fine and applied art at schools in Switzerland and Germany. In 1915, at an art show in Zurich, she met the Alsatian sculptor and poet Arp, who used Jean as his first name in France and Hans everywhere else. They were among the early members of Dada, which centered on a night club in the city, the Cabaret Voltaire, and convened artists and writers in revolt against anything that could be associated with the obscenity of the First World War. Others on the galvanic scene included the Romanian poet Tristan Tzara and the German Hugo Ball. The multitalented, routinely daring Taeuber fit right in. 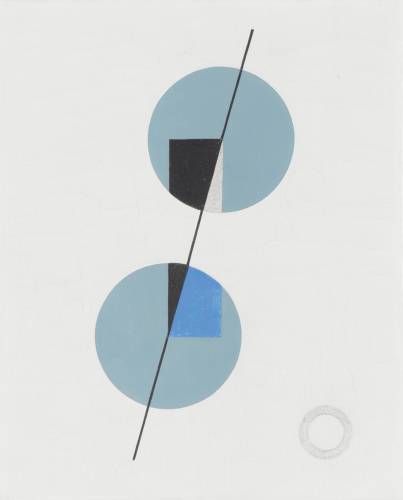 The Dadaists, deprecating museum-worthy art, devoted their self-defining energies to evenings marked by such high jinks as improvisations of willfully incomprehensible poetry. They conceived of their activities as the termination—a sardonic swan song—of a disgraced Western civilization. Taeuber, elaborately costumed, would dance in a manner that, in 1917, Ball described as “full of spikes and fishbones.” Only one blurry photograph documents that phase. Also scantily recorded, with set designs and a few photographs, is her hectic three-act marionette show of 1918, an adaptation of an eighteenth-century commedia-dell’arte play, “King Stag.” The production closed after three performances, amid the perils of that year’s deadly flu pandemic. The marionettes survived and are on view at MOMA—astonishingly inventive human, animal, and fantastical figures, such as a several-sword-wielding whirling dervish of a gizmo—in brightly painted, metal-hinged wood. Clips from a speculative re-creation, which was filmed in 1993, stir a longing in the viewer to have attended the original show. You don’t have to have been there, but what bliss if you were.

Largely inspired by Taeuber’s tours de force of design, experiments in nonfigurative art took hold in the Dada circle. Further embroideries and gouaches of hers, also entitled “Vertical-Horizontal Composition,” develop a language of form so fluent that she could seem to have been born to it: intricately balanced, invariably surprising. She extended the mode to involve triangles and then curvilinear or patchy, scattered shapes, all vivacious and, such is the intimacy of her surfaces, begging to be touched. She often detoured from two dimensions, painting wooden heads with irrational abstract patterns, as if cogitating some superior realm of the psyche. Asked by Tzara in 1920 to supply a photograph of her face, she had several taken in which she peeks out, smiling, from behind one of the “Dada Heads.”

Taeuber and Arp married in 1922, and she joined his name to her own. They travelled widely among the hot spots of the European avant-garde before settling in France, in 1929. Her repertoire included some staggeringly labor-intensive beading, which she deployed in jewelry and small purses that she could sell commercially. She also made delicately woven tablecloths that you wouldn’t dream of setting a coffee cup on. Her devotion to crafts can seem strategic, allowing her to evade comparison with the big-time fine-art styles of the era—in which, nonetheless, she was fully versed. An inveterate joiner, she enhanced group shows of numerous tendencies, including Surrealism. People liked having her around. 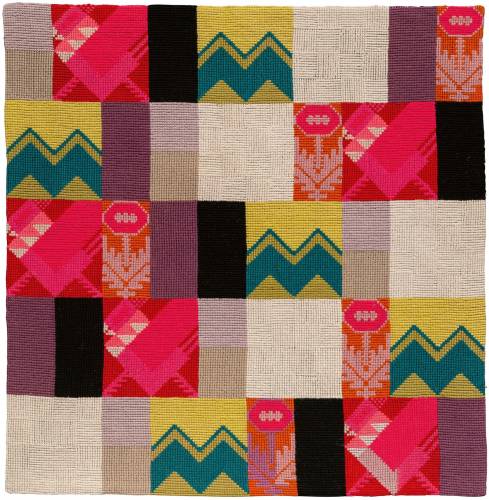 Starting in 1930, Taeuber-Arp concentrated on oil painting. She proved a topnotch contributor to the movements Cercle et Carré and Abstraction-Création—both of which were organized to promote geometric abstraction—at a certain loss of charisma. Another painter. But look closely. She exercised such technical subtleties as building up what appear to be freehand flurries of curling lines with tiny, almost undetectable strokes to give them subliminal physical mass. Whatever she did, including incursions in stained glass and designs for architecture and interior-decoration projects, acquired mystique from how she did it.

In 1940, Taeuber-Arp and Arp fled their home, outside Paris, for the Unoccupied Zone of southern France, shortly before German troops entered the city. The couple contemplated but stalled a possible immigration to the United States (they had visas) before taking refuge back in neutral Switzerland. In January of 1943, Taeuber-Arp spent a night at a friend’s house. She lit a woodstove in the guest room but, having inexplicably neglected to open the flue, died in her sleep of carbon-monoxide poisoning. The calamity persists as a rankling hurt.

A friend has suggested to me that the Taeuber-Arp show exemplifies what he calls “the MOMA apology tour.” Having promulgated a canon of modernist masters and movements since its earliest days, under the direction of Alfred H. Barr, Jr., in recent years the museum has taken to celebrating past talents and phenomena that it once consigned, when considering them at all, to marginal status. A concurrent show at the museum, “Joseph E. Yoakum: What I Saw,” presents works by a Chicagoan outsider artist who died in 1972. Yoakum began painting at the age of seventy-one, toward the end of an obscure, knockabout life, and was warmly embraced by a cohort of wackily figurative Chicago artists who, flipping off New York influences, dubbed themselves the Hairy Who; they have lately been coming in for recuperative justice themselves. Yoakum’s landscapes of sensuously swollen forms, seething with visceral imagination, fill one blank in MOMA’s narrative of twentieth-century art.

But Taeuber-Arp’s case goes beyond a gesture of belated catholicity. Her elevation revises what is understood as “major” in modern art. Far from incidental in her epoch, she was integral to the wholesale expansion of what art could be and how it could alter the world at large. The show recasts assumptions of value that were long held hostage to hierarchies of medium and that were dominated, with rare exceptions, by men. The story it tells liberates thinking about what has mattered—and still does, and henceforth will—in our cultural annals of consequential genius. ♦