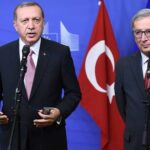 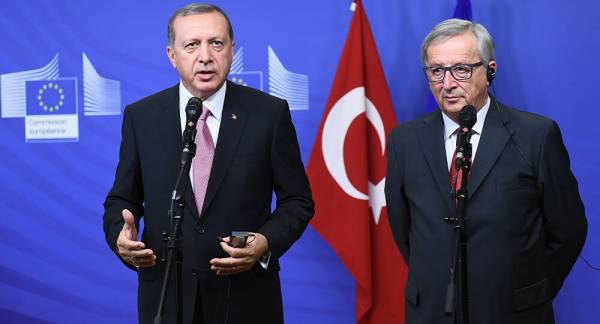 The EU Commission chief has once again lashed out at Ankara a week after Recep Tayyip Erdogan had accused the EU leaders of failing to keep their promises to Turkey on the abolition of the bloc’s visa regime for the country’s nationals.

“For some considerable time, Turkey has been moving away from the European Union in leaps and bounds… Europe is a continent of mature democracies, those, who knowingly offend pull up the drawbridge, and sometimes I have the impression that there are those in Turkey, who want to pull up the drawbridge and later blame the European Union for the failure of the accession negotiations,” Juncker said in his annual State of the Union address in the European Parliament.

This is not the first time Juncker has blamed Ankara for “moving away from Europe.” In late August, he said that he suspects that Turkish President Recep Tayyip Erdogan expects Europe to make statements about the termination of negotiations concerning Turkey’s membership in the bloc in order to show that the EU is responsible for this.

Relations between Brussels and Ankara became strained after Turkey’s crackdown on opposition journalists, as well as public servants and judges, in the wake of the July 2016 coup attempt which prompted EU disapproval in the form of its suspension of accession talks.

The already strained relations have been further damanged as a result of the statements made by main German chancellor candidates Angela Merkel and Martin Schulz during debates held earlier this month, who voiced opposition to Turkey’s membership in the EU. The Turkish president compared the “anti-Turkish” to “Nazism.” Moreover, he accused the leaders of the EU countries of failing to keep their promises to Ankara on the abolition of the bloc’s visa regime for Turkish nationals and the provision of financial assistance for the reception of refugees by Turkey.

Turkey signed an association agreement with the then-European Community in 1963 and submitted a membership application in 1987.