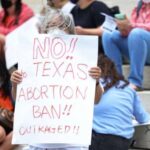 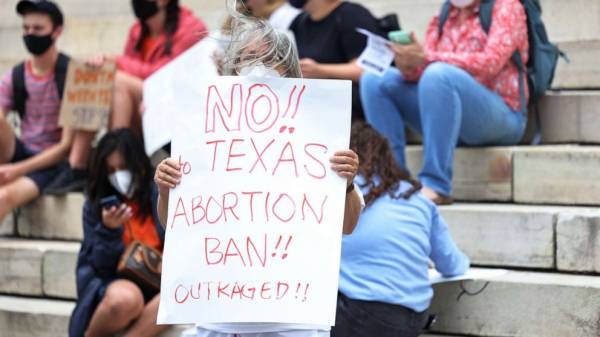 A confluence of events in Texas have galvanized Democrats nationally at a moment they were looking for something to rally behind. The events highlight some intraparty divisions in the short term, but party leaders see them uniting Democrats in the longer term.

The Texas Legislature’s belated but ultimately inevitable approval of new voting restrictions is putting new pressure on Senate Democrats to act at the federal level, even though the filibuster is still going nowhere.

And the enactment in Texas of the most restrictive anti-abortion law in the nation — coming after the Supreme Court first declined, and overnight ultimately refused, to block it — is elevating debates over women’s rights, the structure of the court, the makeup of the Senate and, yes, the filibuster again.

Michael M. Santiago/Getty ImagesDebra Sweet holds up a sign as she joins people gathered for a reproductive rights rally at Brooklyn Borough Hall on Sept. 1, 2021, in New York City.

More immediately come potential electoral impacts. The year’s two most competitive gubernatorial races — the California recall, where voting ends in less than two weeks, and the election in Virginia, where early voting starts in just over two weeks — both feature Democrats seeking to portray GOP opponents as extremists.

Both McAuliffe and California Gov. Gavin Newsom have been framing their races as battles against Trumpism, in strategies that are impossible to dry-run before voting is over. But Democrats could find more fruitful messaging out of current events than out of former presidents.

The right has long been cozy with the notion of taking matters into one’s own hands in the name of conservative values and “law and order.” Now, Republican lawmakers are breathing new life into vigilantism by scribing it into legislation.

Texas’ abortion bill is the only the latest example, the legislation that is designed to subvert legal challenge, says, “Any person, other than an officer or employee of a state or local governmental entity” in Texas is eligible to bring civil action against those who perform abortions or assist a woman in getting an abortion after she’s six weeks pregnant.

It essentially deputizes everyday Texans to enforce this ban by weaponizing the courts and dangling $10,000 in reward money in front of those who report violations.

Lm Otero/APA security guard opens the door to the Whole Women’s Health Clinic in Fort Worth, Texas, Wednesday, Sept. 1, 2021. A Texas law banning most abortions in the state took effect at midnight, but the Supreme Court has yet to act on an emergency appeal to put the law on hold.

Similarly, Texas’ restrictive voting bill empowers partisan poll watchers and places restrictions on the removal of a poll watcher from a voting location. The Lone Star State isn’t the only one legislatively putting this kind of power in the hands of the self-appointed. Florida and Georgia have also passed similar provisions, all evoking fears of voter harassment and intimidation.

It’s the same reverence for vigilante justice that catapulted Mark and Patricia McCloskey, the gun-toting St. Louis couple who aimed firearms at Black Lives Matter protesters, to fame and earned them a pardon from Missouri Gov. Mike Parson, a Republican.

To cement conservative ideals in Texas, lawmakers could be setting a dangerous precedent in permitting private citizens to police one another.

For months, the Pennsylvania Senate race has been shaping up to be a crowded matchup of Democratic forces vying for the winning spot in next year’s primary in hopes of flipping retiring Republican Sen. Pat Toomey’s seat blue. Party leaders, including President Joe Biden, have not yet mobilized broad support behind any particular candidate in the field, but the same cannot be said across the aisle.

On Wednesday, Army veteran Sean Parnell received the endorsement of former President Donald Trump over a handful of other Republicans running on pro-Trump agendas. Parnell previously ran for Congress in 2022 when he lost to another 2022 Senate hopeful, Democratic Rep. Conor Lamb.

“Sean bravely fought for our Country as a Captain in the U.S. Army and was awarded two Bronze Stars (one for valor!) and the Purple Heart,” Trump said in a statement, while taking a jab at the Biden administration’s withdrawal from Afghanistan in adding that “he never left anyone behind.”

Although the state’s campaign season is gradually shifting into gear amid redistricting efforts, Trump’s endorsement precedes the typical bustle of an active primary cycle. The move is likely to once again, put the spotlight on the long-term impact of the former president’s influence within his party.

Previous : WHO Warns of Mu, But Where Did the New COVID-19 Variant Come From?
Next : House GOP Leader McCarthy threatens companies that cooperate with Jan. 6 probe