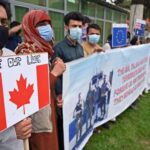 Time is running out to save Afghans who helped US troops 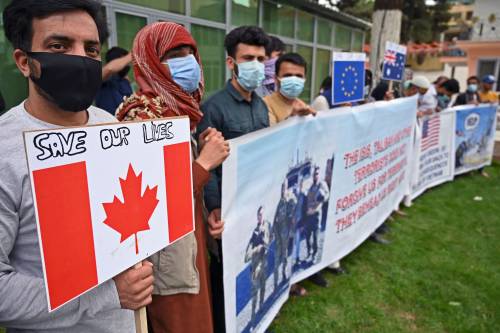 As the US withdraws from Afghanistan, time is running out to save thousands of Afghans who helped American forces during the two-decade war and now face retribution from the rapidly advancing Taliban.

The Biden administration hatched an eleventh-hour plan, known as Operation Allies Refuge, to evacuate thousands of Afghan interpreters as well as other employees of the US government or allied forces, and their families. An initial group of about 2,500 started arriving at Fort Lee in northern Virginia on July 30.

They’re coming to the US on a Special Immigrant Visa (SIV), more than 73,000 of which have already been issued to Afghans in the last 13 years. The House recently voted on an overwhelmingly bipartisan basis to make 8,000 more of those visas available, and to make it easier to apply for the program.

The Biden administration is also pursuing agreements with other countries to allow eligible Afghans to relocate to safety while the US finishes processing their applications. And the administration has opened up a new pathway for Afghans (and their families) who have worked for a US government-funded program, US-based media, or non-governmental organizations, but who don’t meet the narrow requirements for the SIV program, to come to the US as refugees.

“Those who helped us are not going to be left behind,” Biden told reporters at the White House last month.

But in practice, those efforts may not be enough to protect all of the Afghans who helped the US government. There are more than 18,000 applicants for the SIV program waiting for processing, and thousands more who may have worked with the US government but aren’t eligible for the program. If they live in the outer provinces of Afghanistan, they might not be able to reach Kabul, where the US is carrying out evacuations for SIVs, let alone another country where they can apply for refugee status.

For advocates who have been sounding the alarm for months, it seems like a crisis that could have been avoided.

“It’s very frustrating to put a lot of work in and provide policy recommendations saying, ‘Hey, there’s a problem coming,’ and then it arrives and people scramble to try to fix it after the fact,” said James Miervaldis, the chair of No One Left Behind, a group that advocates for US allies in Afghanistan. “This is just a complete process failure from top to bottom.”

Advocates are baffled as to why the Biden administration was so slow to act on evacuations, leading to a last-minute scramble that has already resulted in dozens of Taliban revenge killings and record levels of civilian casualties in the first half of 2021.

Chris Purdy, project manager of the Veterans for American Ideals program at the advocacy group Human Rights First, told me that the Biden administration seemed to assume that the Afghan government was going to be able to hold the Taliban at bay for a few years, or at least long enough for the US to process the 18,000 individuals in the SIV pipeline and tens of thousands of their family members.

But Purdy and other advocates thought that was a charitable reading of the situation on the ground, so his organization approached the administration in April with a plan to get Afghan allies out.

Human Rights First estimated that it would cost about $700 million to $800 million to evacuate Afghan allies, or about $10,000 per person — well under the budget recently allocated by Congress — and the evacuation would take about a year to complete.

They suggested sending Afghans to Guam, a US territory that hosts several military bases and has been used for past evacuations, where they would undergo initial processing for a few days before being sent to military bases throughout the mainland US for further processing. Those who needed extra security vetting could stay in Guam while awaiting processing, and people who were further along in their processing could get their Covid-19 shot in Guam before being transferred to other bases. Should they be found ineligible for SIV status, they could also apply for asylum, which is available to migrants who reach US soil.

The Biden administration rejected their plan.

“We were quietly told, ‘Thanks, but no, thanks. We’ve got this covered,’” Purdy said. “And I don’t think it was until the Taliban made significant gains in May that it dawned on them that maybe their assessment of the [Afghan] government was incorrect.”

But experts and advocates say the Biden administration should have been able to foresee that pulling out of Afghanistan would create a power vacuum that would change the battlefield. Something similar happened when the Obama administration withdrew US troops from Iraq in 2011, only for ISIS militants to seize control of large swaths of the country thereafter. Obama sent troops back in 2014 as a result.

The US also has extensive experience carrying out similar evacuations of allies in the past, including the 1975 evacuation of Vietnam, the 1996 evacuation of Kurds from northern Iraq, and the 1999 evacuation of ethnic Albanians from Kosovo. Those evacuations were carried out in a matter of weeks or months, and Congress had not appropriated nearly as much money to get them done.

“This was all very predictable,” Purdy said. The Biden administration “should have been better prepared. And that’s something that they’re going to have to own.”

The SIV program has longstanding problems

The SIV program has been plagued by eligibility issues and delays that predate Biden’s announcement of the US’s withdrawal from Afghanistan, but which have made it all the more difficult to get people to safety in recent months.

Applicants have to submit a significant amount of documentation, including a recommendation letter from their senior US-citizen supervisor; a letter from their employer confirming that they were employed for at least one year; and a statement describing the threats they’ve received as a result of working for the US government. They also have to obtain approval from the chief of mission, the principal officer at the US embassy in Kabul, before they can even apply for an SIV.

But many Afghans who would otherwise be eligible for the program have difficulty obtaining that recommendation letter from a US-citizen supervisor, especially in cases where they were working as contractors.

“It’s really hard for the applicant to find that ultimate US government person to vouch for them because they may have just been lower in the chain of command or their direct supervisor might have been another Afghan or just someone who’s not a US citizen,” said Julia Gelatt, a senior policy analyst at the Migration Policy Institute.

Even if an applicant can gather the required documents, they will face lengthy wait times before they are ultimately approved for a visa. By law, SIVs are required to be processed within nine months, but in practice, the average processing time has always been longer than that. Last year, a federal judge ordered the government to come up with a plan to process these applications in a timely manner after thousands of SIV applicants sued. Yet it’s still taking about two years to process the applications, Gelatt said.

It’s not clear to what extent those wait times can be reduced for the 18,000 applicants in the pipeline and the thousands more who are applying for SIV status now. The government did increase resources to help clear a pandemic-related backlog of SIV interviews at the Kabul embassy, and it has dedicated more stateside staff to processing SIVs remotely. But it has to weigh competing interests of bringing people to safety as quickly as possible while taking the time to thoroughly vet for potential security threats.

“With all the resources in the world, it doesn’t seem like they’re going to be able to clear the backlog by the end of this month when the US completes its withdrawal,” Gelatt said. “It’s going to take more than the next four weeks to finish processing all of the pending applications, not to mention all the people who might be applying now, especially as the eligibility criteria have shifted.”

Opening up spots for Afghan refugees might not be enough

It might not be feasible for Afghans who can’t get an SIV to apply for refugee status through the Biden administration’s newly created priority program. As Secretary of State Antony Blinken acknowledged in a recent press conference, it’s a “significant diplomatic, logistical, and bureaucratic challenge.”

“This is incredibly hard,” he added. “It’s hard on so many levels.”

Using their own money, Afghans will have to travel to a third country where they are able to apply for refugee status. Tajikistan is preparing to receive up to 100,000 Afghans, and between 500 and 2,000 Afghans are already arriving daily in Turkey. Other potential options include Kazakhstan, Uzbekistan, the United Arab Emirates, Kuwait, and Qatar.

But the US has yet to announce any formal agreements with these countries to host Afghan refugees. And not every Afghan under threat might be able to make that dangerous and potentially expensive journey, especially those who live in the nation’s outer provinces.

“How are they even going to get to Kabul to get a flight out of the capital when the Taliban controls the roads? Where’s that money gonna come from?” Purdy said.

What’s more, the refugee priority program has narrow eligibility requirements for individuals who worked directly for the US government. They can’t even apply for themselves — US employers have to refer a qualified individual for the program. That means that, for example, a local construction crew that built a school run by a US-funded aid group might not be afforded refugee protection.

“The Taliban don’t care if you were an employee of the US government, or if you were a subcontractor of the US government, or a sub-subcontractor,” Purdy said. “I’m not saying you should evacuate the entire country of Afghanistan, but this restrictive program that they put in place — it’s got a lot of problems with it. I’m hopeful that they’re going to open it up to be more expansive.”

Even Afghans who are able to reach a third country and are eligible for refugee status could find themselves stranded abroad for months, if not years. Biden has promised to raise the annual refugee admissions ceiling drastically — from 62,500 to 125,000 starting in October — paving the way for more Afghans to come to the US.

But US refugee resettlement agencies are trying to rebuild in the aftermath of the Trump administration, which shifted resources away from refugee processing, and international refugee resettlement operations have slowed dramatically due to the pandemic, particularly in countries with relatively low levels of Covid-19 vaccinations. Those challenges could contribute to possible delays.

For Afghans who remain in imminent danger, they may have no alternative.

“My email and Facebook and Twitter inboxes fill up every day with horrific, gruesome messages from these families,” Purdy said. “We are running out of time.”

Previous : Seafood Towers at Margie’s in the Rockaways
Next : Texas Judge Signs Order to Block Detention of Fugitive Democrats Who Fled Over Voting Reform Bill