Mark Meadows and the Republican Response to the January 6th Investigation

“Yesterday was a terrible day,” a legislator wrote in a text to Mark Meadows, Donald Trump’s chief of staff, on January 7, 2021. “We tried everything we could in our objection to the 6 states. I’m sorry nothing worked.” That text was released last week by the House select committee investigating the events of January 6th, namely, the assault on the Capitol by a mob that was trying to disrupt the tally of electoral votes. The text itself, though, was referring to a parallel attempt by members of the House to engineer the rejection of the votes of six states (Arizona, Georgia, Michigan, Nevada, Pennsylvania, and Wisconsin) that Joe Biden had won. Neither effort succeeded—and that failure, extraordinarily enough, seems to have been a cause of regret for the apology-texting legislator. 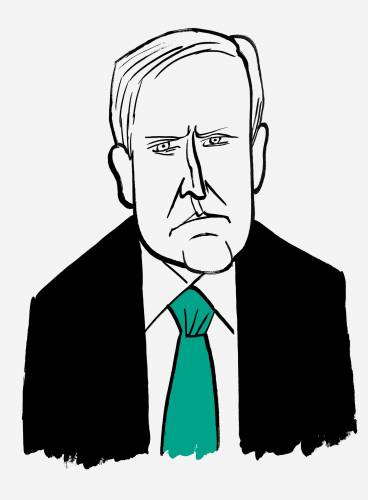 The text was released as the committee was recommending that Meadows be charged with criminal contempt for defying its subpoena to appear, and the identity of its author was not made public. The same is true of the identity of the House member who, on November 4th, the day after the election, ­texted Meadows to suggest an aggressive strategy: “Why can t the states of GA NC PENN and other R controlled state houses declare this is BS (where conflicts and election not called that night) and just send their own electors to vote and have it go to the SCOTUS.” It’s interesting to think about what might be packed into the phrase “declare this is BS”—“this” could refer to the votes in those particular states, the democratic process itself, or really anything that wouldn’t result in Trump’s running the country.

At this point, it’s no surprise that Republican members of both the House and the Senate shared the underlying goals of the angry crowd; Representatives Mo Brooks and Madison Cawthorn spoke at the Trump rally that preceded the assault. A hundred and thirty-nine representatives and eight senators voted to reject the electors of at least one state. But there is more to be learned about the level of coördination between Trump’s aides and his allies in Congress and the various Trump-aligned groups that helped with the logistics for the rally. What, in short, was the relation between the House members and the mob?

Meadows’s contempt referral is an important development for several reasons. As chief of staff, he served as a point of connection, notably in efforts to pressure officials in the Justice Department and at the state level to pursue fake election-fraud cases. (Meadows was on the line when Trump called Brad Raffensperger, Georgia’s secretary of state, and suggested that he could face criminal prosecution if he didn’t “find” more votes for him.) He was in direct contact with Trump on January 6th; he might be able to shed light on an apparent delay in deploying the National Guard to safeguard the Capitol and on why he sent an e-mail the day before saying that the role of the Guard would be to “protect pro Trump people.” Representative Jim Jordan, of Ohio, forwarded a text to him which made the argument that Vice-President Mike Pence could throw out electoral votes. At a hearing last week, Representative Liz Cheney, of Wyoming, read aloud texts to Meadows from Donald Trump, Jr., who told him in the midst of the assault that the actions had “gone too far and gotten out of hand,” and from Fox News figures, including Laura Ingraham, who wrote, “Mark, the president needs to tell people in the Capitol to go home. This is hurting all of us.” (Ingraham said that her text had been used misleadingly by “regime media.”)

But Meadows’s case is also significant because of how he and his party responded to the subpoena. He had initially agreed to coöperate with the committee and was slated to testify; indeed, the texts were among the material he handed over ahead of his planned appearance. Now he is suing Nancy ­Pelosi in order to quash the subpoena. Meadows has explained his change of heart by saying that Trump asserted “executive privilege,” but, as Representative Jamie Raskin, a member of the committee, put it, an ex-President can’t just “wave a magic wand” to exempt an ex-aide from appearing at all. (Steve Bannon, Trump’s former chief strategist, made a similar spurious claim, and he has now been charged with criminal contempt.) A key factor seems to be that Trump got mad.

When the committee’s recommendation that Meadows be referred for charges reached the House floor, though, the Republican members who rose to debate it barely bothered to engage with the legalities. Several used their time to urge the passage of the Finish the Wall Act. “You know who doesn’t show up for court orders?” Representative August Pfluger, of Texas, asked. “Ninety-nine point nine per cent of the illegal immigrants who are served those papers.” Members spoke about fentanyl, Hunter Biden, mask mandates, “empty shelves at Christmas,” and the unjust treatment of parents who object to “some crazy curriculum,” as if the response to any criticism of Trump is to hopscotch from one of the former President’s obsessions to another.

When the Republican members did address the matter at hand, it was in startlingly vitriolic terms. Representative Mary Miller, of Illinois, said that the committee’s work is “evil and un-­American.” Yvette Herrell, of New Mexico, said that it is setting the country “on its way to tyranny.” Jordan called the committee an expression of the Democrats’ “lust for power.” And, inevitably, Marjorie Taylor Greene, of Georgia, said that its proceedings prove that “communists” are in charge of the House. It’s tempting to dismiss such rhetoric as overblown, but Congress has become an ever more uneasy place. Last week, Steny Hoyer, the House Majority Leader, sent the Capitol Police Board a letter asking for clarification on the rules about where representatives can carry weapons in the Capitol.

On Tuesday, Cheney said that the decision about how to deal with the legacy of January 6th is “the moral test of our generation.” A fear is that a growing sector of the Republican side of the aisle is engaged in another sort of test: a probing of just how Trumpist representatives are, and, by implication, how far they might go if a situation akin to what took place on January 6th occurs again. Last time, the violence at the Capitol elicited enough shock that some Fox News anchors and leading Republicans texted Meadows, asking for Trump to calm the mob. If there is a next time, the texts to whoever plays Meadows’s role might have a different, and more dangerous, message. ♦

Previous : The Troll Slayer
Next : How omicron broke Covid-19 testing