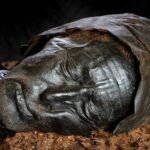 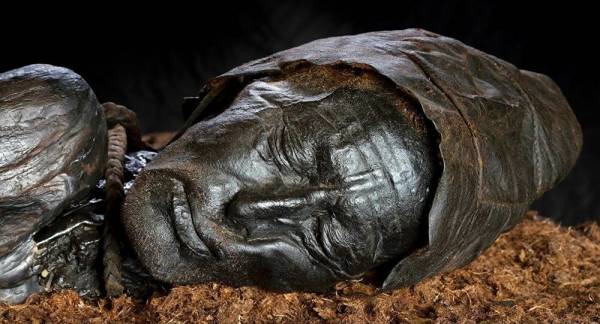 Tollund Man’s death, which was most likely some type of human sacrifice, dates back roughly 2,400 years, and the researchers stressed that thousands of individuals died under the same circumstances in the wetlands of Northwestern Europe during the Iron Age.

A fresh study of the last meal of the famous Tollund Man, an Early Iron Age bog man (naturally mummified corpse) found in Denmark, has revealed new information about his final hours before his most likely tragic death.

Researchers lead by Nina Nielsen of the Silkeborg Museum also discovered eggs and proteins from intestinal worms, indicating the mummy was infected with parasites such as tapeworms, whipworms, and mawworms.

1 / 4
©
Photo : Facebook / Museum SilkeborgReconstruction of the Tollund Man on display at the Silkeborg Museum

The team added in the research that they’d looked for components that could be related to rituals, and investigated whether the weed seeds, which were also found in many other bodies which met the same fate, could represent a food shortage, and looked into Iron Age health and sanitation as well as cooking habits in this re-investigation.

Five peptides unique to bony fish were found, offering “clear evidence of the consumption of fish as part of the last meal,” according to the research, which considered Bjaeldskovdal’s closeness to a lake and watercourses.

People who were placed in acidic peat bogs were naturally mummified and sometimes well-preserved, providing scientists with a thorough and unique view into daily life at the time, including health, diet, death, and a final supper.

The bog body was discovered in Bjaeldskovdal during peat cutting in 1950, and his stomach and intestinal tract were taken during forensic exams that year, before the contents of different regions of his gut were extracted separately in 1951.

As of now, given the fact that technologies for the preservation of organic materials were not so developed in the 1950s, only a perfectly preserved head remained of the original body, while the rest of the organic tissue of the body itself was decomposed. The Tollund Man is exhibited in a museum with an exact copy of the body and the original head.