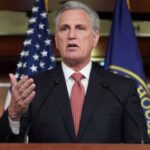 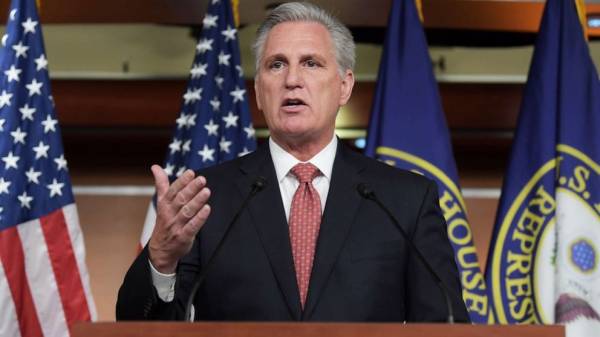 House Republican Leader Kevin McCarthy called on House Speaker Nancy Pelosi to bring the lower chamber back to Washington early from its scheduled recess to address the escalating situation in Afghanistan, which culminated in a deadly bombing at the Kabul airport Thursday as American citizens and allies attempt to flee the country.

The House convened for two days earlier this week to address unrelated matters, but is not expected to return to Washington until Sept. 20, long after the Aug. 31 deadline for the U.S. withdrawal from Afghanistan.

MORE: Afghanistan updates: 12 US service members among those killed outside Kabul airport

McCarthy said Pelosi must bring the chamber back swiftly, in part to hold a vote on legislation proposed by Wisconsin Republican Rep. Mike Gallagher.

“It is time for Congress to act quickly to save lives. Speaker Pelosi must bring Congress back into session before August 31 so that we can be briefed thoroughly and comprehensively by the Biden Administration and pass Representative Gallagher’s legislation prohibiting the withdrawal of our troops until every American is out of Afghanistan,” McCarthy said in a statement.

It’s unlikely, however, Pelosi will call the House back and President Joe Biden has said he intends to stick to the Aug. 31 withdrawal deadline.

In a statement offering thoughts and prayers, Pelosi said Congress will continue to be briefed, but did not address McCarthy’s demand.

Pelosi spokesman Drew Hammill tweeted in response to McCarthy and blasted him for “empty stunts and distractions.”

“Right now, American heroes are risking & giving their lives to execute an extraordinarily dangerous evacuation, & the Minority Leader wants to defund the mission & tie the Commander in Chief’s hands in the middle of the most dangerous days of the operation,” Hammill tweeted.

“What’s not going to help evacuate American citizens is more empty stunts & distraction from the Minority Leader who sat idly by as Pres. Trump proudly negotiated with the Taliban. The Biden Administration has repeatedly briefed the Congress & providing frequent updates each day,” he added.

Pelosi was briefed by phone on the situation in Afghanistan by Defense Secretary Lloyd Austin, her office told ABC News on Thursday.

MORE: Blinken says 'no deadline' to get out Americans, Afghans, but many will be left behind by evacuation flight

McCarthy’s call came ahead of Pentagon officials confirming that 12 U.S. service members were killed by two suicide bombers believed to have been ISIS fighters in Kabul on Thursday.

Wali Sabawoon/APA U.S. soldier holds a sign indicating a gate is closed as hundreds of people gather, some holding documents, near an evacuation control checkpoint on the perimeter of the Hamid Karzai International Airport, in Kabul, Aug. 26, 2021.

Though Republicans have for weeks ridiculed Biden’s decision to withdraw troops from Afghanistan, Democrats in both chambers have been slower to comment on the unfolding mass evacuation at the Kabul airpot.

Following news of the deadly blast in Kabul, however, Democrats condemned the incident, branding it a terrorist attack against U.S. troops.

“I strongly condemn this act of terrorism and it must be clear to the world that the terrorists who perpetrated this will be sought and brought to justice,” Senate Majority Leader Chuck Schumer, who was briefed by Austin Thursday, said in a statement.

“One thing is clear: We can’t trust the Taliban with Americans’ security,” Foreign Relations Chair Bob Menendez said in a statement. “This is is a full-fledged humanitarian crisis, and the U.S. government personnel, already working under extreme circumstances, must secure the airport and complete the massive evacuation of Americans citizens and vulnerable Afghans desperately trying to leave the country.”

Democrats are still not directly criticizing Biden, and many — offering thoughts and prayers — said they’re in touch with the state department as they monitor the situation on the ground in Kabul.

But some Democrats are beginning to break with the administration, suggesting that they would support an extension of the withdrawal deadline.

“Bringing the thousands of Americans and allies in Afghanistan to safety must remain our top priority, and pushing the evacuation deadline is a necessary and important step,” Sen. Catherine Cortez Masto, D-Nev., tweeted.

Republicans have pointed the finger at Biden for weeks as the situation has grown more dire. Moments after the blast Thursday, Republicans sharpened their criticism.

​​”Joe Biden has blood on his hands,” tweeted Rep. Elise Stefanik, the No. 3 House Republican. “This horrific national security and humanitarian disaster is solely the result of Joe Biden’s weak and incompetent leadership. He is unfit to be Commander-in-Chief.”

Outrage toward Biden is not limited to Republicans in the House. Senate Minority Leader Mitch McConnell has for weeks been outspoken in opposition to removal of troops in the region. In remarks Thursday that took place before the blast in Kabul, McConnell called the situation on the ground in Afghanistan an “unmitigated disaster.”

“These guys couldn’t organize a two-car funeral,” McConnell said of the administration’s withdrawal efforts. “And it’s tragic to see those young people clinging to the sides of the planes and falling to their death and how anxious they were not to be left behind.”

“What we are seeing is the result of a poor plan poorly executed,” Sen. Roy Blunt, R-Mo., said in a statement. “The Biden administration must use every resource it has available to get Americans and our allies to safety.”