Ever since the phrase “gluten-free” entered the vernacular, it has been deployed, in some circles, as a term of mild disparagement. In 2015, the American comedian and life coach J. P. Sears went viral with a YouTube sketch titled “How to Become Gluten Intolerant,” in which he describes gluten-free bread as a “coagulation of mysterious flours that form a brick with a density of a black hole and the dryness of a desert.” It’s unlikely that Mr. Sears has dined at Senza Gluten, a reliably good and gluten-free Italian restaurant in Greenwich Village. 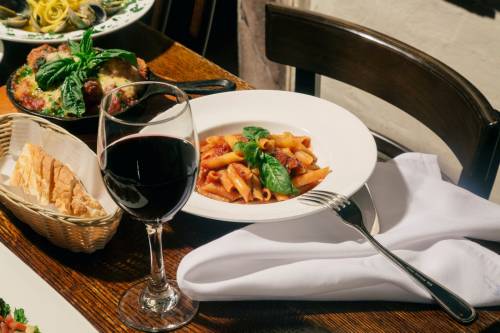 The substitution of wheat with alternative flours (rice, chickpea, tapioca) in these Italian classics does not call attention to itself.

A few years ago, I took my gluten-free girlfriend there just hours before making her an offer of marriage. The scheme worked. The photograph from that day in which my soon-to-be wife looks happiest shows her inspecting the dessert menu. “The biscotti is gluten-free?” she asked the server. Yes. “And the tiramisu is gluten-free?” “Everything is gluten-free here,” he declared, like St. Peter at the gates of Heaven. Such scenes are common at Senza Gluten, which is Italian for “without gluten.” Not long after the place opened, seven years ago, an elderly woman came in alone and ordered a shrimp salad and lasagna, with layer upon layer of rich Bolognese sauce and melted Parmesan. After a few bites of the lasagna, she started crying. She asked to see the chef. “For fifteen years, I haven’t tasted lasagna,” she told him, and kissed his hands. 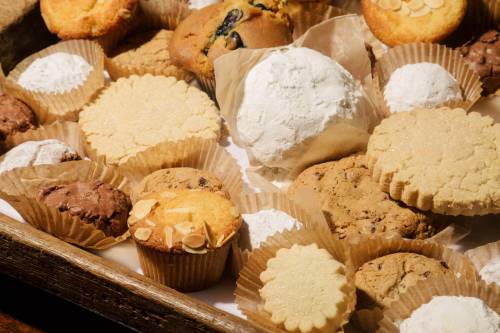 Red-velvet cake, vanilla-custard éclairs, and bomboloni alla crema are among the offerings at Senza Gluten’s café and bakery, a block south of the restaurant on Sullivan Street.

There are few surprises at Senza Gluten, and that’s largely the point. Someone who hasn’t had lasagna in fifteen years, or even passable croutons in their salad, does not crave novelty so much as the familiar, a conjuring of recognizable tastes and textures from the Before Time. Besides, making Italian food without wheat is bold enough; any further deviation from protocol risks courting controversy. Done right, gluten-free cookery is an act of gastronomic legerdemain: the substitution of alternative flours (rice, chickpea, tapioca) should not call attention to itself.

On a recent evening, the fried-and-baked cauliflower, coated in white-rice flour, in the Cavolfiore alla Parmigiana antipasto, was delectably crunchy—a perfect foil to the soft, warm mozzarella in which it was entangled. The rigatoni, made with corn flour and dressed in smoked prosciutto, three varieties of wild mushroom, and white-truffle oil, was flawlessly al dente. The corn-based spaghetti alla pomodoro that accompanied the chicken parm had a lovely bounce, the kind I’ve never pulled off using substitutes at home. Most of the pasta is imported dry from Italy. The one exception is an off-menu special: the handmade, silky-smooth potato-flour gnocchi, submerged in a prodigal sauce of mozzarella, Fontina, Parmesan, and Taleggio. 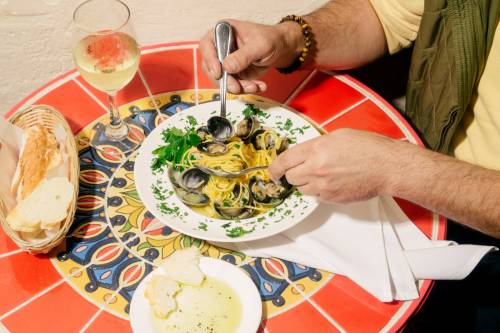 The kitchen at Senza Gluten recently acquired a commercial pasta machine, but for now most of its pasta is imported dry from Italy.

For dessert, consider walking down to Senza Gluten’s café and bakery, a block south on Sullivan Street. I once fell into a deep well of analysis paralysis in front of its display case, stuck between a vanilla-custard éclair, a pillowy bombolone alla crema, and a slice of chocolate cake topped with Grand Marnier ganache. The staff kindly guided me to the red-velvet cake, and to a sparkling Italian wine that arrived in a champagne flute and tasted of candied fruit and flowers. The exquisite pairing is liable to spark a madeleine moment, calling up involuntary memories of an idyllic summer day in the hills of Tuscany, even if you’ve never been there.

Curiously, the head chef at both establishments, Jemiko Solo, is neither gluten-free nor Italian. He’s a Georgian guy whose intimacy with celiac disease is entirely vicarious, and he learned his craft by working at various trattorias around town. In fact, some of Solo’s recipes are near-verbatim translations of Italian classics he used to prepare as a line cook, minus the gluten. The other day, one of his old bosses, a six-foot-six chef from northern Italy, dropped by for some lasagna on the house. “That’s my dish,” he told Solo, with mock severity. “No, it’s not yours,” Solo fired back. “It used to be yours—not anymore.” (Dishes $14-$47.) ♦

Previous : Choose Your Own Kandinsky Adventure at the Guggenheim
Next : North Carolina’s extreme new gerrymander, explained