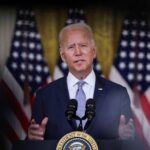 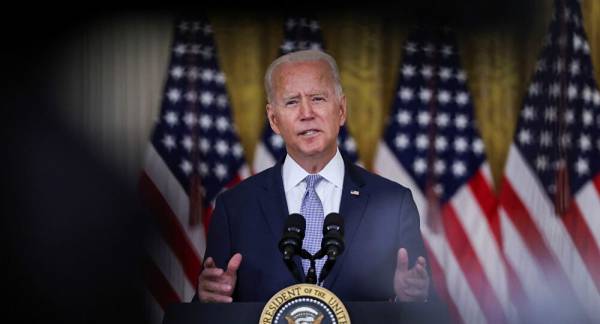 Over the last several days, US President Joe Biden has remained adamant that the US withdrawal from Afghanistan is a necessity, underscoring that reasoning for the pullout was further bolstered by the fact that US-trained Afghan armed forces chose to not fight back against advances made by the Taliban militant group.

US President Joe Biden acknowledged on Wednesday that there was no way to avoid the chaotic scenes that unfolded in Afghanistan over the weekend, and that, if needed, US forces would be staying past the August 31 deadline to evacuate all Americans.

Biden, who made the unexpected remarks during an exclusive interview with ABC News’ George Stephanopoulos, further maintained that regardless of the mayhem, the withdrawal was necessary.

​When pushed on the matter, Biden reiterated that the possibility of madness unfolding in Afghanistan always weighed on the withdrawal decisions, but that US officials understood it was going to be an “enormous” situation to oversee and handle from the get-go.

However, the conversation also geared back toward the Trump administration, which had negotiated the US withdrawal with the Taliban with an original deadline of May 1. Leaning into the threat of violence for US troops, Biden surprisingly admitted that one of the main reasons that attacks against American forces had been pulled back was because of the Trump White House’s peace deal.

“I had a simple choice. If I said, ‘we’re gonna stay,’ then we’d better be prepared to put a whole lot hell of a lot more troops in.”

​Snippets of the exclusive interview were released to the public shortly after US Defense Secretary Lloyd Austin and Gen. Mark Milley held a joint news conference revealing that the US does not presently have the ability to remove large numbers of Americans who are outside of Kabul, but that the US would continue to conduct evacuations “for as long as we possibly can.”

US officials have indicated that they successfully evacuated just over 3,000 individuals from Afghanistan, including all non-essential US embassy personnel. Figures suggest that about 15,000 Americans and 65,000 visa-carrying Afghan nationals are set to leave on one of the many evacuation flights being scheduled.

In the moments after the Taliban entered the Afghan capital of Kabul, a trove of images and video footage emerged online showing hundreds of Afghans flocking to the Hamid Karzai International Airport with the hopes of getting out of the war-torn nation on one of the many US flights.

Recordings shared online documented Afghans clinging to C-17 military transports, even as the aircraft were taxiing down the runway. One video reportedly captured an unidentified body flailing under an aircraft. In another instance, graphic video showed what is believed to be two bodies falling from another transport plane.

Biden’s remarks come on the heels of statements made by Army Maj. Gen. William Taylor, who told reporters at a recent Pentagon briefing that officials are seeking to start evacuating between 5,000 and 9,000 passengers daily, so long as the situation at the airport does not deteriorate.

It has been reported that the Taliban’s control of checkpoints have been complicating evacuation efforts; however, administration officials have been in talks with the Taliban to rectify the matter.