Facebook is now Meta, but it’s not quite a metamorphosis 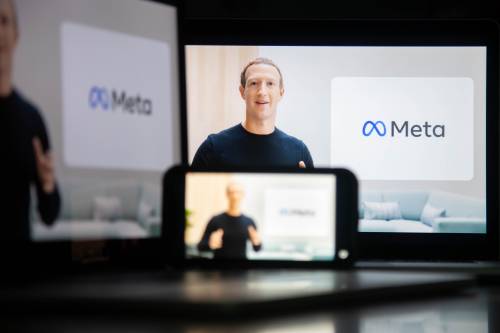 Facebook, Inc. is now Meta Platforms, Inc. — Meta for short. At an event on Thursday, Mark Zuckerberg announced that the company is rebranding itself and focusing on building the “metaverse,” a simulation in which people interact as avatars in real time. This new name signifies that Facebook doesn’t want to just build this new, digital environment. It wants to be the face of it, too.

“From now on, we’re going to be metaverse first, not Facebook first,” Zuckerberg said at Facebook Connect, the company’s virtual and augmented reality developer conference. “As our new brands start showing up in our products, I hope that people come to know the Meta brand and the future that we stand for.”

We don’t know the full backstory behind Meta’s new branding, which includes a logo that looks like a twisted infinity sign. When announcing the new name, Zuckerberg explained that he liked Meta because it’s a Greek word that “symbolizes there’s always more to build.” Perhaps coincidentally, the Chan Zuckerberg Initiative, the philanthropy Zuckerberg founded with his wife, Priscilla Chan, acquired a startup called Meta that uses AI to aggregate scientific research, though the project’s website says it’s a separate entity from Facebook. Meta’s most obvious connotation, of course, is with the metaverse itself. 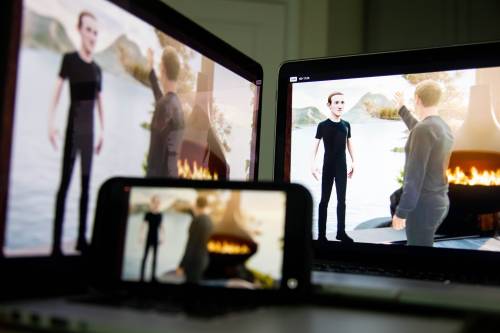 Aside from Zuckerberg’s big name announcement, this year’s Connect Conference focused on explaining how the metaverse and the technology that powers it will actually work.

Through a series of colorful and highly animated demonstrations, the presentation focused on how people might play games, go to work, exercise, and even study in a virtual, three-dimensional environment, whenever it goes live. Zuckerberg also highlighted his company’s efforts to build new products for the metaverse, including new virtual and augmented reality hardware, highly realistic digital avatars, and new video game experiences. And adopting the new name, the CEO explained, is meant to represent the importance of the new metaverse business, which will operate separately from Facebook’s social media apps.

Facebook’s new focus on the metaverse comes seven years after the company purchased Oculus, which builds virtual reality headsets that allow people to play 3D virtual games. Andrew Bosworth, the company’s vice president of augmented and virtual reality, also announced on Thursday that the Oculus name would be retired and that its hardware and apps will now operate under the Meta brand.

While these VR headsets are still somewhat bulky and primarily popular among gamers, Facebook seems to think the technology could play a key role in the broader adoption of Horizon, a virtual reality platform that allows user avatars to interact with each other online. This, along with future innovations — possibly including augmented reality glasses that Bosworth’s team has reportedly been developing — could eventually help create a foundation for the metaverse.

The company formerly known as Facebook is pivoting to the metaverse as it faces a deluge of challenges, including a potential probe from the Federal Trade Commission and the ire of lawmakers concerned about the company’s plans to build a kids’ version of Instagram, which have been put on hold. The company is also facing a surge in critical media coverage fueled by the thousands of internal documents leaked by the Facebook whistleblower, Frances Haugen.

The documents have given the public a new view into Facebook’s internal operations and revealed the company’s dismal record when it comes to combating hate speech, political polarization, and human trafficking, among other problems. But as Recode’s Shirin Ghaffary explained last week, Facebook’s new approach shows that the company doesn’t think current challenges should deter its broader ambitions. In fact, Zuckerberg said as much in the conference’s opening remarks.

Still, the company seemed to indicate it had learned lessons from its experience running the world’s largest social media platform. While developing the metaverse over the past few years, Facebook leaders insisted that the company would be a lot more cautious. Researchers will be consulted from the beginning, and privacy, interoperability, and openness will be built into Facebook’s metaverse products from the outset, they said.

“You want to know that when you buy something or create something, that your items will be useful in a lot of contexts and you’re not gonna be locked into one world or platform,” Zuckerberg said. “It’s a future that is beyond any one company that will be made by all of us.”

But Facebook’s new name suggests that the metaverse will primarily be made by Facebook, and might even be synonymous with the company. After all, much of the conference focused on how Facebook is getting the technology needed for the metaverse ready before this virtual reality system even launches. Whenever that happens, it won’t be surprising when people think that the metaverse and Meta are the exact same thing.

Previous : Jeff Bezos wants a low-orbit office park to replace the ISS
Next : The Scent of Spices, and Vegan Pho, at Bánh