The Merry Eclecticism of Thai Street Food at Soothr

There’s something at once jovial and jarring about Soothr, the rare restaurant born in the age of COVID that has not only survived but thrived, by adjusting to the erratic rhythms of pandemic dining. Securing a table begins on the pavement, where patrons line up to flash proof of vaccination. The maître d’ facilitates these exchanges from the window of a glass-box foyer; no one leaves without a pithy reminder of the restaurant’s ninety-minute table limit. “The clock starts at the time of the reservation,” someone called out one recent evening, prompting a flurry of phone tapping from aspiring diners, presumably relaying the message to less punctilious companions. 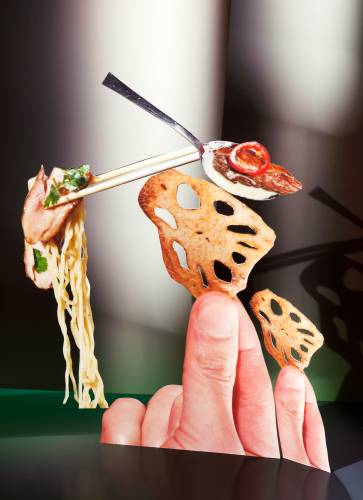 Originally conceived as a noodle shop, Soothr has grown its menu to reflect the merry eclecticism of a street fair.

Such militaristic timekeeping has undoubtedly become more necessary since Soothr’s acquisition of a Michelin Plate, in May, but the tempo contrasts sharply with the lethargic mood of mid-century glamour inside the restaurant, evoked through carved wooden screens, a rotary pay phone, and vintage tasselled lampshades. The drinks, too, nod to an enchanted past; each of nine cocktails is named after an auspicious gemstone, which might seem hokey if the beverages were less well made. The River’s Topaz is Soothr’s take on an Old-Fashioned, a mixture of Thai golden rums with toffee notes that round out the smokiness of cinnamon and star anise; All That Jade (Kahlúa, matcha, honey, egg white) is indulgent enough to be dessert. 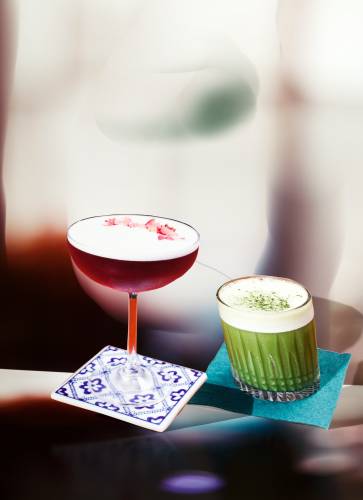 The restaurant’s drinks nod to an enchanted past; each of the nine cocktails is named after an auspicious gemstone.

Start with the duck rolls, the outer crunch of their deep-fried shells echoing the springy filling of wood-ear mushroom, both of which heighten the decadent richness of the duck meat. Pair that with the Yum Nuer, a fine, fierce braised-beef salad tossed with makrut lime and gooseberries. A number of Soothr’s dishes are made from the proprietors’ old family recipes. “My mother used to stew this often for us,” Chidensee Watthanawongwat, one of the co-owners, who grew up in northeastern Thailand, said of the braised beef. Soothr also inherited its meatballs from Watthanawongwat’s family, who once ran a sausage-making factory. “We know how to season ground pork,” Watthanawongwat added with a grin. 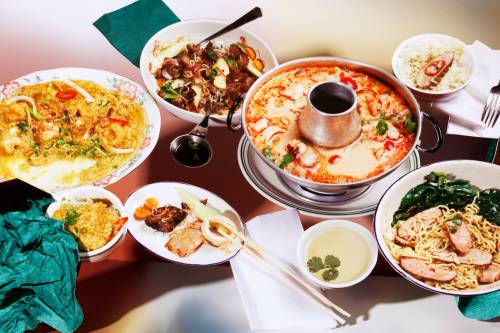 Koong Karee, a shrimp-and-egg dish, is the standout among the entrées.

Originally conceived as a noodle shop, Soothr has grown its menu to reflect the merry eclecticism of a street fair. “Hunt for the best food in Thailand and, sooner or later, you’ll find yourself on Yaowarat Road,” Watthanawongwat said, referring to the thoroughfare of Bangkok’s Chinatown, renowned for its bustling food stalls. The Had Yai chicken, a popular street food, is a lighter, less greasy version of its Western fried-chicken counterpart. Marinated in a coconut-milk paste with ample cilantro root, cumin powder, black pepper, and garlic, it’s studded with a crackly, caramelized lace of fried shallots.

Koong Karee, a shrimp-and-egg dish, is the standout among the entrées. The mellow sweetness of its cream sauce fortifies the flavor of scallions and celery while balancing the brininess of the shrimp. Watthanawongwat’s partners, Kittiya Mokkarat and Supatta Banklouy, hail from Sukhothai, an ancient city in central Thailand, from which Soothr’s Sukhothai Tom Yum soup takes its name. Lacking the firepower of its noodle siblings, the soup persuades rather than stupefies. Watthanawongwat admitted that it’s his favorite dish; despite eating it day and night, he said, he can’t seem to tire of it. His second favorite is also the boldest: Nam-Tok Moo, a pork-blood soup heaped with rice noodles, meatballs, and morning glory, so hearty and comforting that one wonders why it doesn’t appear on more menus.

Sooner or later, no matter how escapist the ambience, there’s no avoiding the ninety-minute timer on your table. On a recent evening, a waiter tried to remove a half-finished cocktail from a table no fewer than three times in five minutes. One of the diners looked at her watch after the third attempt—there were still thirty minutes left on the clock. After downing the rest of her drink in a single gulp, she decided that there was just enough time to order another. (Dishes $12-$32.) ♦