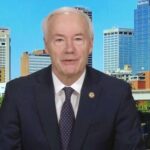 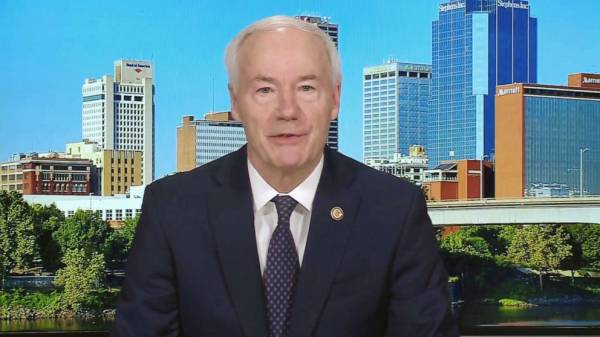 Republican Gov. Asa Hutchinson of Arkansas said he regrets signing an April law banning mask mandates and is seeking to reverse it as coronavirus infections soar among unvaccinated youth, making him an outlier among some Republican governors who have doubled down on their anti-masking views.

Arkansas has seen a 517% increase in the number of virus cases among people under 18 between April and July, according to an Associated Press report.

The state, like other hotspots in the country, is experiencing a frightening surge in COVID-19 with 3,000 new cases on Wednesday and 1,232 currently hospitalized, as the delta variant spreads.

So far, 42% of the state’s eligible population ages 12 and up has received at least one dose of a vaccine, according to state data, and a majority of adults 18 and over are also unvaccinated.

“There’s been a lot of distrust and we hope to overcome that because medical sciences, vaccines work, I believe, and we need to get those out — because that’s the way out of this,” Hutchinson said.

But the Arkansas governor, who is term-limited, is an outlier among Republican governors across the country who are doubling down on their own legislation banning mask mandates as the public policy measure continues to feed debate over personal liberties.

Republican Gov. Ron DeSantis of Florida, a state which has become the epicenter of the virus, responded to President Joe Biden telling governors on Tuesday to help or “get out of the way” by making his defiance a rallying call — and a fundraising tool, sending out a letter with the subject line: “I’m Standing In Joe Biden’s Way.”

“I am standing in your way,” DeSantis said at a press conference Wednesday, declaring that Florida will remain a “free state” where children won’t be asked to wear masks.

MORE: Help or 'get out of the way,' Biden says to GOP governors on combatting pandemic

DeSantis’s position is shared by Republican Govs. Greg Abbott of Texas, who he has said Texans should have the “right to choose,” as well as Pete Ricketts of Nebraska, Kim Reynolds of Iowa, Doug Ducey of Arizona and Kristi Noem of South Dakota, who have all ridiculed the Centers for Disease Control and Prevention’s latest masking recommendation that everyone in areas with substantial or high levels of transmission — vaccinated or not — wear a mask in public, indoor settings.

Sarah Huckabee Sanders, the frontrunner to replace Hutchinson in the 2022 Arkansas governor race, has made clear she opposes all mask and vaccine mandates no matter the circumstances.

Hutchinson, instead, after telling the public at a press conference Tuesday he wishes the mask ban wouldn’t have become law, called for a special legislative session asking lawmakers to reverse it, only so that public schools can have the flexibility to require masks for students.

It’s still not clear the GOP-led legislature in Arkansas will go along with Hutchinson’s request.

As the legislature met Wednesday, the Little Rock School District Board of Education voted to file a lawsuit against the state because of the anti-mask law. That follows another lawsuit filed Monday by parents also seeking to strike the law down, citing health concerns for their children at school.

Rory Doyle/The New York Times via ReduxMembers of the Arkansas House of Representatives gather at the State Capitol in Little Rock, Ark., Aug. 3, 2021.

The bill which might stave off those lawsuits, HB1003, failed to advance in public health panel Wednesday after GOP lawmakers pushed back.

But while the legislature continues to meet Thursday to work out the details, at least 730 students and staff from the Marion School District in Arkansas were under quarantine — just two weeks after classes started.

Presented with that number on “Good Morning America” and asked if he’s confident that it’s safe for kids to go back to school, Hutchinson said there would be challenges but said the state’s focus should be on vaccines over masks to prevent outbreaks.

“Our emphasis should be on the vaccines and not get sidetracked, in a minuta debate on masks, even though that is important for the 12 and under, and the flexibility we’re talking about,” he said.