A Middle Eastern Party at Shukette, in Chelsea

Where else but in New York City would you find a chef from Gravesend, Brooklyn, who’s the daughter of an Italian mother and an Indonesian father, at a restaurant named after an Israeli marketplace, making an incredible twist on a popular Turkish snack? You’ll find this—the chef Ayesha Nurdjaja and her gozleme, a stuffed, pan-fried bread—and much more at Shukette, a Middle Eastern restaurant in Chelsea. It’s the latest from Vicki Freeman, whose Bowery Group also includes the High Line-adjacent farm-to-table stalwart Cookshop, the East Village Mexican canteen Rosie’s, and the SoHo Mediterranean spot Shuka, where Nurdjaja is also the chef. These dependable restaurants have all evolved, in the past fifteen years, along with Freeman’s hard-won formula: nurture and follow the passions of talented chefs, highlight seasonal ingredients, balance the practical with the decadent. 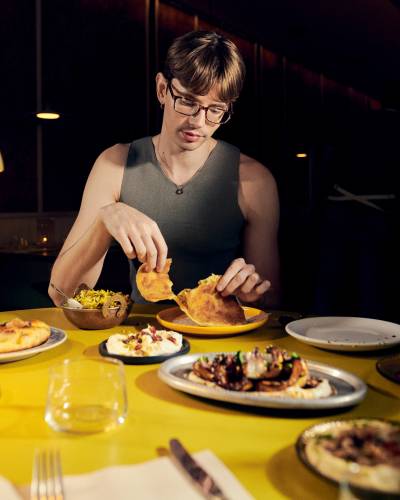 Gozleme, based on a popular Turkish snack, is a pan-fried bread stuffed with provolone and grated potato.

The formula feels extra inspired at Shukette, which Nurdjaja, on the “Today” show, described as Shuka’s “mischievous sister,” perhaps because it ventures further from the safety of the familiar; at Shuka, beet hummus is as crazy as it gets. Shukette’s menu emphatically suggests that you’d better be ready to party. Its headliner, “When You Dip, I Dip, We Rip,” includes an exceptionally rich labneh, darkened by harissa, brightened by lime and pomegranate seeds. There’s also a winsome salt-cod dip, like a friendly whitefish salad spiked with serrano chili and fried-garlic chips. They pair well with any and all items in the “Rip This” section, an abridged tutorial on Middle Eastern breads: frena, a thick, pillowy round of Moroccan origin, lightly oiled and pan-fried for patches of crunchiness, topped with whole roasted garlic cloves; lafa, an Iraqi flatbread, grilled and slathered with oil-laden za’atar; the delightful gozleme, a generous oblong sheath filled with provolone and grated potato. Hot, tangy, crunchy, showered with flaky salt and incongruously light, it’s the grilled cheese you didn’t know to ask for. 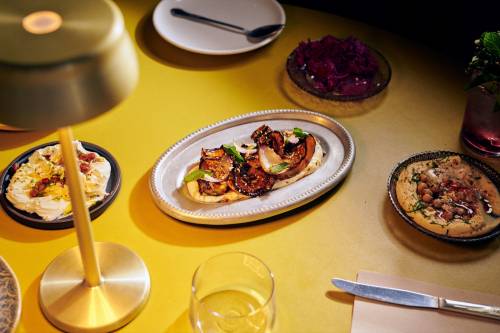 An extensive list of salads and small plates (“The Shuk”) includes well-fried squid that tries on an unctuous sauce of Castelvetrano olives and preserved lemon; kibbeh appears as mini ground-lamb corn dogs, which were a bit dry even when dipped in spicy tahini. But the charcoal-grill section (“Al Ha’esh”) provides reliable pleasures, high among them Fish in a Cage, a whole porgy painted with harissa, served on its ungainly grilling basket with herb and chili sauces. The juiciest and most flavorful dish is the Joojeh Chicken, a half bird marinated until tender in turmeric, yogurt, and onion, then char-grilled, a classic Persian preparation. Add some shawarma-spiced fries and swipe it all through a side of toum, a pungent Lebanese garlic spread. 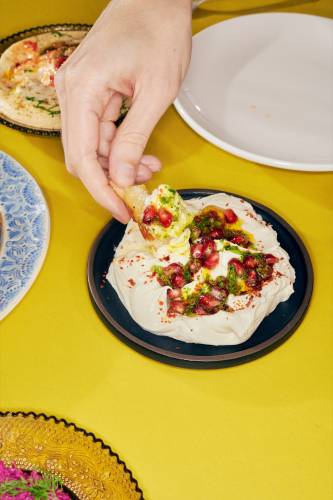 The menu’s “When You Dip, I Dip, We Rip” section includes the exceptionally rich labneh, darkened by harissa, brightened by lime and pomegranate seeds.

Shukette opened in July, when its extensive outdoor-dining setup made perfect sense, but it remains to be seen how the restaurant-going hordes will respond to another winter outside. One recent night, as I was guided away from the restaurant down Twenty-fourth Street, Freeman, acting as hostess, asserted that I would be seated in the “V.I.P. suite,” i.e., the table farthest from the restaurant. With no heater in sight—now that the city has banned propane, she had electric ones on order—the metal chairs looked like an awfully cold place to wait for a friend. A blanket was quickly proffered and a citrus gazoz—a spritz with St. Agrestis Paradiso apéritif, lemon shrub, and grapefruit bitters—was promptly delivered. 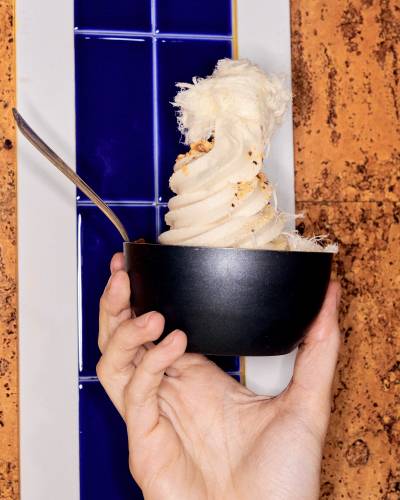 It was cozy enough, but the atmosphere was a far cry from the cheerful festivities inside, where you can sit in blond-wood booths or, better still, at the “chef’s counter,” a bar nearly as long as the establishment—a main component of the restaurant’s concept long before the pandemic changed anyone’s perception of such close quarters. At the counter, guests are treated to a front-row view of chefs performing something of a ballet, setting purple potatoes on green chermoula, freestyle-dressing roasted cauliflower with date slivers and mint, frying bread, and grilling fish, kebabs, and lemons. One of each, please. (Dishes $5-$31.) ♦

Previous : How the Week Organizes and Tyrannizes Our Lives
Next : Facebook’s freaky new glove