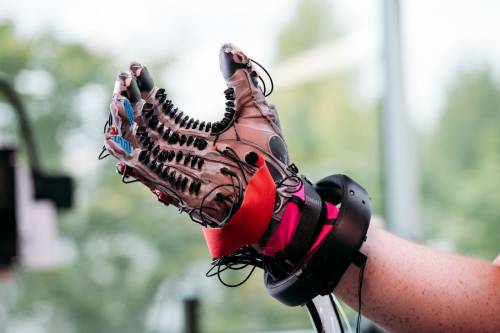 On Tuesday afternoon, Meta, the company formerly known as Facebook, made a supposedly exciting announcement: a glove. But not just any glove. It’s a haptic glove lined with tiny motors that use bursts of air to mimic the sense of touch, and it looks like a wearable nightmare.

There’s nothing necessarily wrong with Meta inventing a 21st-century Power Glove that lets you feel digital objects. The company has apparently been working on the project for seven years, and the team that’s building it is thinking at least a decade into the future. The glove is also less unnerving than the brain wave-reading bracelet Facebook announced earlier this year (the company insists that the wristband does not read your mind). But it’s increasingly clear that, even with its shiny new name, Meta is struggling to make the metaverse, a virtual space where people can work and hang out via avatars, more accessible — and less creepy — to the average human being.

Some people will love this freaky handgear. Built by Meta Reality Labs, the prototype haptic glove is designed to work with the virtual reality systems of the future. Most VR headsets currently work in congress with controllers equipped with joysticks and buttons. The Meta Quest and Quest 2, more Reality Labs products, also offer controller-free hand tracking, which uses the camera onboard the headset and computer vision algorithms to interpret what your hands are doing and translate that motion into the virtual world. So for now, when you make the motion of picking up an apple in VR, your actual hand would not feel the sensation of holding an apple.

Enter: the glove. Meta’s prototype haptic glove uses principles from soft robotics and employs pneumatic and electroactive actuators to quickly inflate tiny air pockets on the fingers and palm of the glove. These actuators are essentially tiny motors that can create the sensation of pressure and, hence, touch. The idea here is that if Meta could fit thousands of these actuators onto a haptic glove and combine those sensations with the visual input of a VR headset or augmented reality glasses, which project digital images onto the real world, the wearer could reach out and feel virtual objects. With gloves like these, you might one day shake the hand of someone else’s avatar in the metaverse and feel the squeeze.

Meta did not invent haptic clothing. There are several companies that make haptic vests, pants, and even entire suits that resemble battery-powered Marvel superhero costumes. Various articles of haptic clothing have been around since the early 1990s — much like the term metaverse, which author Neal Stephenson coined in the 1992 sci-fi novel Snow Crash. Haptic gloves specifically played a key role in Ernest Cline’s 2011 novel Ready Player One, as well as in Steven Spielberg’s film adaptation. In the real world circa 2021, the vast majority of people using technology like this are really serious gamers with money. A haptic vest that will poke you in 40 different places on your body, for instance, costs $500.

It’s worth pointing out that VR has historically been the realm of really serious gamers, and that’s a potential problem for Meta and its grand plan for the metaverse. If Mark Zuckerberg wants everybody using his metaverse products, much like the nearly 3 billion people who use Facebook, he’s not doing himself any favors by leaning into the sci-fi-inspired inventions his Reality Labs is churning out. 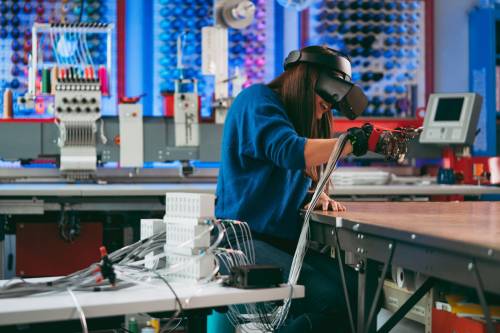 Haptic clothing is a futuristic concept, but it’s also very weird and potentially invasive. Would you like Meta (read: Facebook) logging data about your body movements through a special glove or scanning your brain waves through a bracelet? Yes, the Meta Quest hand tracking technology does collect and store data about your movements. This might seem innocent enough if you’re playing a round of the popular VR game Beat Saber in your living room. It’s more concerning when you imagine a world in which you do much of your computing through a VR headset or AR goggles — which is essentially what Zuckerberg thinks the future of the internet will be like.

And there are plenty of reasons to believe that the metaverse and living life through a pair of internet-connected glasses could be cool. In the meantime, immersive VR technologies are proving useful for more and more non-gaming applications. The same day that Meta Reality Labs showed off its prototype haptic glove, the Food and Drug Administration authorized a VR system for treating chronic pain. And this isn’t even the first VR treatment that’s won FDA approval this year.

You might say that Meta’s haptic glove is another distraction — not unlike Facebook changing its name to Meta in the midst of a historically bad scandal and ensuring that everyone would be talking about the metaverse for weeks to come.

It’s reminiscent of another Facebook announcement, one that came just a few days before the name change. In mid-October, Reality Labs said it was launching a research project that would analyze thousands of hours of footage shot from the first-person perspective in order to train artificial intelligence models. Included in that data set was video captured by Facebook’s smart glasses, which are camera-equipped Ray-Bans. The company is calling the data set Ego4D and will be releasing it to researchers around the world this month.

Does this project seem cool and relevant to Meta’s plan to build a metaverse where someday people wearing smart glasses might want a computer to recognize what they’re looking at? Sure. Does it seem worrisome at best that the company training the robots how to see — the company that wants to own a sizable chunk of the metaverse, the next generation of the internet — is the same company that many say is destroying democracy? It does.

This story was first published in the Recode newsletter. Sign up here so you don’t miss the next one!

Previous : A Middle Eastern Party at Shukette, in Chelsea
Next : The space debris problem is getting dangerous