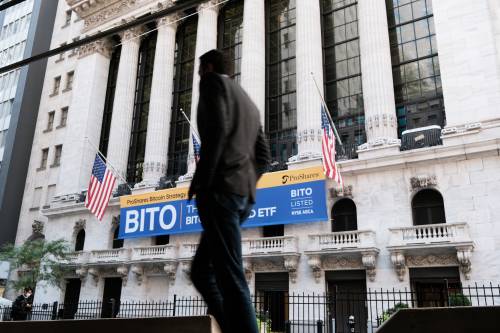 Cryptocurrency’s journey into the mainstream hit a major milestone this week when the first exchange-traded fund linked to bitcoin made its stock market debut. Put more simply, that means that anyone with a brokerage account will soon be able to buy and sell a bitcoin-backed financial product on the stock market. This comes after years of US financial regulators shying away from cryptocurrency, which is notoriously volatile. But now, it looks as though the government is ready to try new things.

The debut was a big hit. After executives from ProShares, the Maryland-based company behind the ETF, rang the bell at the New York Stock Exchange on Tuesday morning, the product topped $1 billion in trading volume on its first day. That makes it one of the top ETF debuts in history. Later that day, the price of bitcoin soared past its all-time high of $64,895 to a new record of $66,975. Experts don’t actually seem that surprised.

“It was a blockbuster, smash, home run debut,” Eric Balchunas, a senior ETF analyst at Bloomberg, told me. “This brings a lot of legitimacy and eyeballs into the crypto space.”

But before we get into why that is, you probably have a few more questions about the terms being thrown around here. For example, what on Earth is an “exchange-traded fund linked to bitcoin?” What does “futures-based” mean? And do most people really need to pay attention to cryptocurrency after so many years of probably not paying attention to cryptocurrency? Let’s walk through these questions one by one.

An exchange-traded fund, or ETF, is a basket of securities tied to the price of assets, like stocks, bonds, or commodities, that can be bought or sold on stock exchanges; anyone with a brokerage account can trade ETFs. An ETF linked to bitcoin, naturally, is tied to the price of bitcoin, and under the Investment Company Act of 1940, all new ETFs must register with the Securities and Exchange Commission. This detail is important because the agency’s approval of a bitcoin ETF suggests that it’s open to allowing more products tied to cryptocurrency to be traded. While the SEC has not considered cryptocurrencies to be securities in the past, the latest development suggests that its views on the matter are evolving.

But it seems it will take some time before the SEC decides if it will allow bitcoin trading on the stock market. The new ProShares fund, which is called the Bitcoin Strategy ETF, is futures-based. That means the fund tracks bitcoin futures contracts traded on the highly regulated Chicago Mercantile Exchange. In other words, the ProShares Bitcoin Strategy ETF doesn’t contain bitcoin itself but rather bets on the future price of bitcoin. In a Tuesday CNBC appearance, SEC chairman Gary Gensler pointed out that the new product will be overseen by the Commodity Futures Trading Commission, the SEC’s sister agency, which will provide some protection to investors — but it is “still a highly speculative asset class.”

Despite those tricky details, this new bitcoin-based ETF is a big deal. The cryptocurrency community has been angling for a financial product like this for years, but regulators have been hesitant to approve one. Cameron and Tyler Winklevoss pitched the first ever bitcoin-based ETF in 2013, but the SEC rejected their first application four years later — and again in 2018 — citing the volatility of the crypto market. Since then, the SEC has delayed decisions on various bitcoin-based ETFs, but it’s currently considering several new proposals, which are subject to a 75-day review period after companies submit them. If the SEC does nothing, which is what happened in the case of ProShares, the funds can start trading. In the next couple of weeks, the SEC review periods for cryptocurrency-based proposals from other companies, including Valkyrie Investments, Invesco, and VanEck, will end as well.

“It’s not that this particular ETF is going to bring in hundreds of billions of dollars or anything,” Balchunas explained. But it’s an important moment because “It’s a bridge to this whole other world that probably isn’t that into crypto and might start to be, now that it’s being delivered in the format they like.”

In other words, more crypto-based ETFs are on the way. And if Gensler sees these new financial products being traded without incident, his SEC might open the door for even more, including those that actually contain cryptocurrencies, like bitcoin and ethereum. The very existence of these ETFs not only means that investing in crypto is easier. It also means that bitcoin has more in common with gold than it ever has before.

Previous : The City’s Only South African Restaurant and Bar
Next : Facebook’s name change plan is a reflection of its real priorities