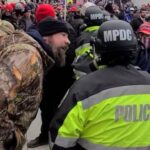 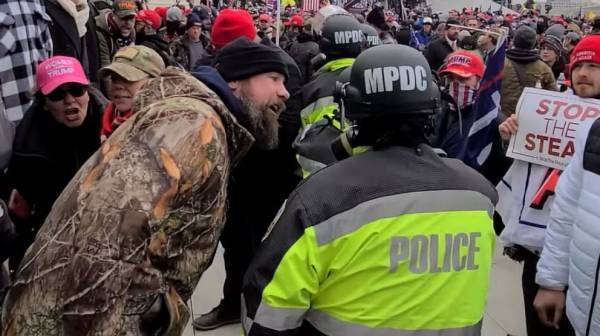 A New Jersey man on Friday pleaded guilty to two federal counts of assaulting law enforcement and obstruction of an official proceeding during the Jan. 6 Capitol assault.

Prosecutors say he was seen in videos stalking a line of officers outside the Capitol before punching one in the head.

The Allen ReportScott Fairlamb of Sussex County, N.J., wearing a camouflage jacket, was caught on video shoving and hitting police outside of the U.S. Capitol in Washington on Jan. 6, 2021.

Prosecutors said they are seeking a sentence ranging from 41 to 51 months in prison and have said Fairlamb should pay $2,000 restitution.

Fairlamb will likely argue for less time behind bars.

Sentencing memos from both parties are due on Sept. 20 and Fairlamb is scheduled to appear back in court on Sept. 27.

“Are you an American? Act like one!” Fairlamb, a gym owner and former MMA fighter, is heard yelling in a body cam video, which was released to ABC and 13 other media outlets as part of the ongoing legal effort. “You guys have no idea what the f*** you’re doing.”

The Allen ReportScott Fairlamb of Sussex County, N.J., wearing a camouflage jacket, was caught on video shoving and hitting police outside of the U.S. Capitol in Washington on Jan. 6, 2021.MORE: Biden signs measure awarding Congressional Gold Medal to police who defended Capitol

Prosecutors also flagged videos Fairlamb posted to his Facebook during the riot where they say he’s seen holding a collapsible baton and saying to the camera, “What do Patriots do? We f***in’ disarm them and then we storm the f***in’ Capitol!”

Fairlamb had previously hosted a pandemic protest at his Pompton Lakes gym in response to COVID restrictions and last summer posted a threatening message on Instagram targeting Rep. Cori Bush.

While Fairlamb’s attorney has said the government is seeking a 51-month sentence for his client, it’s unclear what D.C. District Judge Royce Lamberth will decide is an appropriate punishment — though it could serve as a benchmark for the more than 150 rioters so far charged with attacking police.

Of the more than 30 rioters who have pleaded guilty so far in the Justice Department’s sprawling investigation into the Capitol attack, only six have been sentenced and none of them to significant time in prison.

A Florida man, Paul Hodgkins, was recently sentenced to eight months in prison after pleading guilty to a felony charge of obstructing a congressional proceeding, and two others who had already been in government custody pending trial were sentenced to time served.

There are more than 500 people charged by the Justice Department for their actions on Jan. 6.

Previous : Homeland Security warns of ‘increasing but modest’ threat of violence from Trump conspiracy
Next : Weekend of fear looms for Californians in face of wildfires