The legal landscape of the past weeks and months has prompted questions of which people and entities are legitimate interpreters and enforcers of the law and what happens when you take the law into your own hands. Mississippi and other states took the recent changes in personnel on the Supreme Court as an invitation to defy the Court’s constitutional rulings on abortion, and those states now seem likely to prevail. 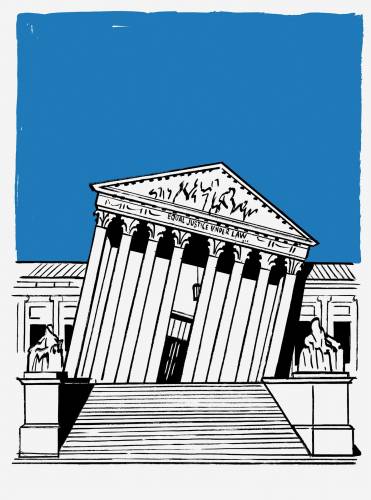 During oral arguments in Dobbs v. Jackson Women’s Health Organization, last Wednesday, the three liberal Justices often seemed to be delivering dirges, as though they had accepted a loss and were speaking for posterity. Mississippi’s ban on abortions after fifteen weeks of pregnancy, which boldly flouts the Court’s precedents setting the line at around twenty-four weeks, is likely to be upheld by the conservative Justices. The arguments offered scant reason for hope that Roe v. Wade will be reaffirmed; the newest conservative Justices, Brett Kavanaugh and Amy Coney Barrett, signalled no qualms about overruling Roe as wrongly decided, which would make a majority of at least five. At a time when the Court’s legitimacy appears extremely fragile, it is telling that the majority’s response to having the supremacy of the Court’s decisions defied seems to be acquiescence and approval.

The open challenge to the Court’s authority perhaps broadly reflects a spirit of legal self-help that is running through the land. For instance, we normally think that the role of law enforcement belongs to the states, not to random neighbors, but two recent homicide cases appeared to put vigilantism on trial. On November 19th, in Kenosha, Wisconsin, Kyle Rittenhouse was acquitted of all charges for shooting three people, two fatally, during racial-justice protests in August, 2020. Rittenhouse, who was then seventeen, had travelled to Kenosha from his home in Illinois with a semi-automatic weapon, purportedly to keep the peace and to prevent property destruction. The jury concluded that he shot his victims in self-defense, because he reasonably feared his own death or serious bodily harm.

On November 24th, a jury in Georgia rejected a self-defense claim, returning murder convictions for three white men who, in February, 2020, chased down and shot Ahmaud Arbery, a Black man who was out jogging. The defendants claimed that they had pursued Arbery because they suspected him of committing burglaries in the area, and that the fatal shots were fired in response to his allegedly reaching for a shotgun that one of them was pointing at him. They tried to justify the pursuit by invoking a Georgia citizen’s-arrest law that authorized anyone who had “reasonable and probable grounds of suspicion” to arrest an escaping suspected felon. The law has since been repealed, but similar laws have long existed in nearly every state.

Any vigilante revivalism today goes hand in hand with private citizens’ increased ability to carry guns in public. The Supreme Court is currently considering the most important gun-rights case since it held, more than a decade ago, that the Second Amendment guarantees an individual’s right to keep handguns in the home for self-defense. On November 3rd, it heard arguments challenging a New York law that allows a license for the concealed carry of handguns outside the home, but only upon a demonstration of “proper cause.” The perverse, self-fulfilling truth is that, as gun ownership has proliferated, an individual’s claim to need a gun for protection has become more plausible. But the idea that ordinary people need to carry guns flows directly from the tradition that champions the use of force by private citizens to uphold the law, instead of—or even against—the state. Looking to the history of carrying arms in early America, the conservative Justices appear likely to extend the right to bear arms to toting guns on the street.

The spirit of vigilantism is also notable in a case that the Court is considering concerning a Texas law that bans abortions after roughly the sixth week of pregnancy. S.B. 8 specifically does not allow state officials to enforce the law, authorizing only private citizens to do so, by suing an abortion provider for damages of ten thousand dollars for each procedure performed—what several Justices referred to, during oral arguments on November 1st, as a “bounty.” The law was designed to circumvent its being challenged in federal court. The arguments were about whether a state may indeed insulate unconstitutional laws from federal-court review simply by delegating their enforcement to the general public. An amicus brief filed by civil-rights organizations linked S.B. 8 to “the violent history of citizen’s arrests and racist vigilantism in the South.”

For the most part, even the conservative Justices seemed offended by Texas’s gambit, not least because Texas had to admit that liberal states could use the same enforcement scheme to insulate unconstitutional restrictions on gun rights from challenge. The Court will likely push back and allow abortion providers to pursue a constitutional challenge to S.B. 8 in federal court. But the ground on which such a challenge could ultimately have been expected to succeed will have radically shifted. Unconstitutional when it went into effect, S.B. 8’s six-week ban may well be constitutional in several months’ time, even if its enforcement mechanism is not, if the Court issues a decision in Dobbs that overturns Roe. Yet, notwithstanding what publicly transpired during the Dobbs oral arguments, a compromise might still be hammered out behind the scenes, in which Chief Justice John Roberts enables a basic right to abortion to remain, while allowing Mississippi and other states to ban abortion as early as fifteen weeks, and leaving it for another day to decide how much before that is too early.

During last week’s arguments, Justice Sonia Sotomayor lamented, “Will this institution survive the stench that this creates in the public perception that the Constitution and its reading are just political acts?” The stench, so to speak, is a by-product of the unresolved ambivalence within the legal system about who has the authority to decide what the law should be. The conservative Justices seemed eager to “return” the question of abortion to the people. But the point of a fundamental constitutional right is that it shouldn’t be at the people’s mercy, particularly when the composition of the Court itself has been shifted through political means for this purpose. The spectacle of states brazenly flying in the face of the Court’s constitutional precedents, shortly followed by the Court’s discarding those precedents to make illegal actions legal after all, would effectively communicate that the Supreme Court is not, in fact, supreme. ♦

Previous : Biden’s bewildering decision to expand a Trump-era immigration policy
Next : Should We Believe the Stories of Men Mistaken for Gods?