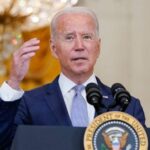 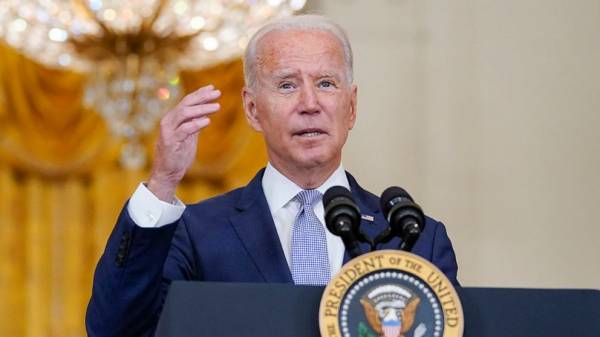 Both of these things can be true: Democrats are on the precipice of historic domestic legislative achievements and braced for a midterm wipeout that would fit with historical trends.

This can also be true: A foreign-policy choice could subsume all of that — and it’s not even one where President Joe Biden was reversing a position taken by his predecessor.

Biden is taking his shortened summer break from Washington in a peculiar political situation. With new uncertainties and old squabbles around COVID-19, a deteriorating and downright scary situation in Afghanistan and no finality to either infrastructure bill that carries so much of his agenda, the president and his party confront a series of all-or-nothing-at-all challenges.

Evan Vucci/APPresident Joe Biden speaks about prescription drug prices and his “Build Back Better” agenda from the East Room of the White House, Aug. 12, 2021.

Weakening poll numbers are just a piece of it. Biden’s standing has long been tied to perceptions of his handling of the pandemic, and normalcy has been elusive this summer.

The Taliban’s advance has the Pentagon now sending 3,000 combat troops into Afghanistan to help withdraw civilian staff and Afghans who have helped the long U.S. mission there. That’s happening even before the deadline Biden set for troop withdrawal — a decision he said this week that he stands by.

Congress, meanwhile, is on its own truncated break knowing that House passage of the Senate infrastructure bill is not guaranteed, just as Senate moderates could sink the far larger social-spending package favored by progressives.

Biden was once both attacked and praised as someone who would be an incremental approach to progress in the presidency. There’s nothing small about the challenges ahead.

The National Education Association, the nation’s largest teachers union, has endorsed vaccine or COVID testing requirements for teachers following California Gov. Gavin Newsom’s announcement his state would be the first to require vaccines or a rigorous testing schedule for teachers.

“This isn’t about politics. This is about keeping our children safe,” the president said on Thursday. “To the mayors, school superintendents, educators, local leaders who are standing up to the governors politicizing mask protection for our kids, thank you.”

As the surge in COVID-19 cases continues to clash with back-to-school season, the pressure for the Biden administration to intervene in states where governors are flouting public health guidance will only grow.

The much anticipated census redistricting drop offered a peek into the way in which data could end up translating into politics in the coming months — especially in some battleground states.

According to information made public Thursday, the nation’s fastest-growing metro area over the last decade was The Villages in Florida, “which grew 39% from about 93,000 people to about 130,000 people.” The Sumter County area is a retirement community in the state’s 11th Congressional District. Republicans have been growing their winning margins there over the last several general election cycles, thereby contributing to the state’s increasingly red political trajectory.

Fduckett/APA county map of the United States and Puerto Rico shows percentage change in population 2010 to 2020.

The newly branded battleground of Arizona can also boast another new title — the home of the nation’s fastest-growing city, Phoenix. Over the last decade, the capital had an 11.2% change in population. Democrats have gradually expanded their influence in the area over the last several cycles — even helping Biden flip the state in November. The population growth in the state’s most populous area could further solidify Arizona as a blue state.

Pennsylvania, the state that clinched Biden the presidency, could continue its track record as a political tossup. It is slated to lose a congressional seat given that areas outside of the southeast saw population declines. The data could further highlight Pennsylvania’s existing urban versus rural political divide.

Previous : More Than Wear & Tear: The Mystery Behind Why Many Egyptian Statues Have Broken Noses
Next : FDA authorizes vaccine boosters for people with weakened immune systems