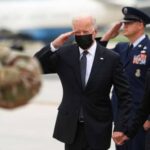 Biden loses his base on Afghanistan: The Note 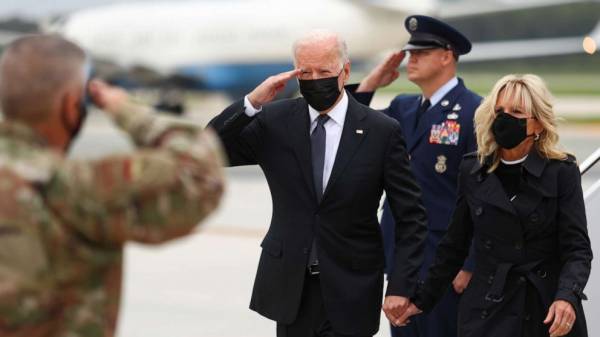 There’s uniting the country. Then there’s what this is.

President Joe Biden is in the midst of the roughest stretch of his presidency — with evacuation operations continuing through Tuesday in Afghanistan under the threat of further terrorist attacks — having failed to convince even members of his own party that he’s on the right course.

In fact, there’s uncommon cross-partisan agreement that withdrawing all U.S. troops by Aug. 31 could be a grave mistake. The percentage of Americans who think U.S. troops should stay until all Americans are out of Afghanistan is 86% among Democrats, 87% among Republicans and 86% among Independents, in the ABC/Ipsos poll conducted after Thursday’s suicide attack in Kabul.

Tom Brenner/ReutersMembers of the armed forces place one of the transfer cases containing the remains of U.S. Military service members who were killed by a suicide bombing at the Hamid Karzai International Airport, into a transfer vehicle during a dignified transfer at Dover Air Force Base in Dover, Aug. 29, 2021.

For those who think troops should stay until all Afghans who aided the U.S. effort there are evacuated, the D-R-I percentages are 72-77-70. The Biden administration has acknowledged that it’s impossible to guarantee that all those who want out will be able to do so before Tuesday’s deadline.

In a sense, the latest polling is behind the judgment of many elected officials who consider themselves Biden allies. The reflexive post-Trump reticence for Democrats to criticize Biden evaporated shortly after Afghanistan fell to the Taliban, with countless Democrats now on the record as skeptical or worse toward the president’s plan and execution.

The White House is hoping and praying for successful evacuations from here, particularly during what Secretary of State Antony Blinken said on ABC’s “This Week” represents “the most dangerous time” — the final hours before the deadline for troop withdrawal.

Beyond that, the president is hoping Americans give him credit for taking the long view on Afghanistan, even if it isn’t popular. While his overall approval ratings have taken an undeniable hit, the ABC/Ipsos numbers show him maintaining strong support for his handling of both COVID-19 and the economy.

There’s a long way to go before establishing that Afghanistan will be a vote-motivating issue. But the horrific events of recent days have already established that it’s the kind of issue that can separate Biden and his party from their voters.

The RUNDOWN with Meg Cunningham

As tragedy unfolds in Afghanistan, Democrats are attempting to renew their calls for federal voting legislation, a battle that has managed to withstand the busy beginning months of the Biden administration.

House Democrats in Texas made pleas with Washington for more federal oversight on voting Friday after they were unable to block the advancement of a large voting bill, SB 1, after weeks of avoiding the special session.

Texas Rep. Chris Turner, one of the House members who traveled to Washington to lobby for the passage of the John Lewis Voting Rights Advancement Act, said its passage in the U.S. House happened with “an eye towards what is happening in this state.”

On Saturday in Washington, activists and prominent Black Democratic lawmakers marched on the National Mall to call on President Joe Biden and Sens. Kyrsten Sinema and Joe Manchin to act on the filibuster and voting rights.

“The senators have found comfort in a White House that has failed to call for an end to the Jim Crow filibuster,” Rep. Mondaire Jones said, calling on Biden to steer the Senate toward abolishing the filibuster. “We know the future we want for ourselves, for our families, for our country,” he said.

Though the president said Friday that his administration was considering moving up the timeframe for administering COVID vaccine booster shots from eight months after vaccination to possibly five months, the White House’s chief medical adviser, threw some cold water on those plans Sunday.

The uncertainty on boosters could further muddle the Biden administration’s messaging on the pandemic, which could further fuel his clashes with Republican governors on COVID-19 policies.

For instance, Gov. Greg Abbott announced on Wednesday an executive order prohibiting vaccine mandates by government entities in Texas, even though Biden has instituted a vaccine mandate for federal workers. And in Florida, Gov. Ron DeSantis opposes mask mandates in schools, yet Biden’s administration is aiding school districts that defy mask mandate bans.

These conflicts echo findings in a new ABC News/Ipsos poll found that only 32% of Republicans polled approve of Biden’s handling of the pandemic, although those are the highest marks he received from Republicans among all the issues polled.

With fewer than 4 in 10 Americans approving of President Joe Biden’s handling of Afghanistan, there is overwhelming bipartisan support for keeping U.S. troops in the country until all Americans and Afghans who aided the United States during the 20-year war have been evacuated, a new ABC News/Ipsos poll finds.