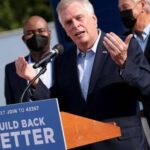 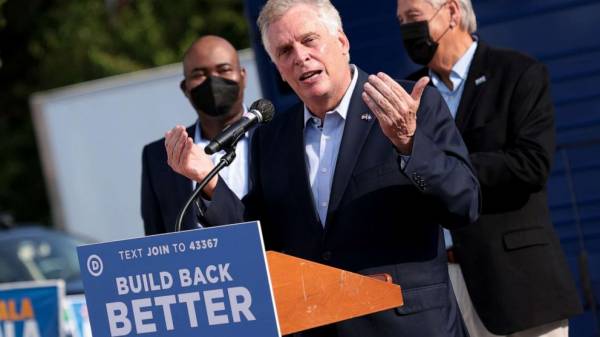 Abortion rights is shaping up to be a core issue in Virginia gubernatorial nominee Terry McAuliffe’s campaign, amplified after the nation’s most restrictive abortion ban took effect in Texas on Wednesday.

The former Democratic governor is now targeting Republican opponent Glenn Youngkin again over their different positions on the issue.

“The stakes are huge. … For years, we’ve said, abortion could be outlawed. Well, it happened today,” McAuliffe told ABC News in an interview. “I vetoed every bill that would have stood in the way of women making their own decisions. And, you know, I’ve vetoed bills that would have defunded Planned Parenthood. I stopped all their nonsense. But it’s a battle here in Virginia. We’re not going back.”

While 12 other states have attempted to similarly outlaw ​first-trimester abortions, legal challenges have prevented those laws from taking effect, making Texas’ law the most restrictive abortion ban in the country.

In addition to being “first and foremost,” a threat to women’s health, McAuliffe also said it’s an economic issue, telling ABC News that “draconian laws” like Texas’ are “absolutely devastating” to the economy.

“It’s an absolute killer to one’s economy. … I called my head of economic development today. I said, ‘Call HP, call Dell, call American Airlines, move ’em to Virginia,'” McAuliffe said, listing off major companies headquartered in Virginia. “Nobody wants to be in a state that discriminates, tells women what to do with their body. … Glenn Youngkin would destroy the Virginia economy.”

At an event in Tysons Corner hosted by Virginia Free Wednesday, Youngkin was asked by a reporter what he thought about the Texas abortion bill. He first deflected, saying his “biggest concern when it comes to abortion in Virginia is my opponent’s extreme view,” going on to attempt to tie him to current Gov. Ralph Northam.

Win Mcnamee/Getty ImagesFormer Virginia Gov. Terry McAuliffe campaigns for a second term during an event at the Port City Brewing Company in Alexandria, Virginia, on Aug. 12, 2021.

Northam, a physician, came under fire in January 2019 for comments he made in which he seemed to imagine a scenario where an abortion would be performed when an infant was about to be born. He was responding to a question about a proposed bill that would allow for a third-trimester abortion to be performed under select circumstances with a single doctor’s opinion, and said he was speaking of a rare hypothetical. Virginia only allows abortions after the second trimester in select circumstances when multiple doctors agree the woman’s life or health is significantly endangered, something his spokesperson pointed out, accusing Republicans of “trying to play politics.”

After further pressing, Youngkin said, “I’ve said it from the beginning of this campaign — I’m pro-life. I believe in exceptions in the case of rape, and in case of incest and in case of where the mother’s life is in jeopardy.”

The law in Texas does not include exceptions for rape or incest.

Abortion rights first took center-stage in Virginia’s gubernatorial race — one of only two gubernatorial contests held this year — in early July when a liberal online publication published a video, surreptitiously recorded by liberal activist Lauren Windsor, of Youngkin reportedly at a June fundraising event in Loudoun County calling himself “staunchly unabashedly pro-life” but saying he cannot openly discuss the issue because he needs to win over independents.

When an off-camera questioner asks Youngkin if he would defund Planned Parenthood or “take it to the abortionists,” Youngkin replies, “I’m gonna be really honest with you, the short answer is in this campaign I can’t.”

“When I’m governor, and I have a majority in the House, we can start going on offense. But as a campaign topic, sadly, that in fact won’t win my independent votes that I have to get. So you’ll never hear me support Planned Parenthood. What you’ll hear me talk about is actually taking back the radical abortion policies that Virginians don’t want,” he said in the recording, as published by The American Independent.

In a statement to ABC News regarding that video, Youngkin campaign spokesman Matt Wolking said, “Glenn Youngkin tells everyone he meets the same thing: he can’t wait to go on offense for the people of Virginia by building a rip-roaring economy, creating more jobs with bigger paychecks, restoring excellence in education, prioritizing public safety, and making Virginia the best place in America to live, work, and raise a family. This deceptively recorded audio demonstrates that Glenn Youngkin says the same thing no matter who he is talking to, unlike Terry McAuliffe who knowingly makes false allegations and decides what to say based on whatever poll is in front of him.”

McAuliffe’s campaign used news coverage and part of that recording in an ad that hit Virginians’ televisions last week. On Tuesday, the campaign launched another abortion-focused TV ad. Both ads hit Youngkin over his “far right agenda.”

Early voting for Virginia’s Nov. 2 off-year election starts Sept. 17. The gubernatorial race is a critical test for Democrats in the post-Trump era. Democrats have made significant inroads in what used to be a key presidential battleground. Not only did the party gain a government trifecta in 2019 by gaining majorities in both legislative chambers, but voters rejected former President Donald Trump last year by nearly double the margin they did in 2016.

McAuliffe has pitched himself by promising to build on the progress he believes Virginia’s made, starting with his first term. But Youngkin, a former private equity executive and political newcomer, argues the commonwealth needs a change in leadership and that longtime politician McAuliffe is “pushing a failed partisan agenda.”

“The only thing we have to do differently is everything. Because to fix what is broken, we can’t settle for half measures. We need a whole new approach,” Youngkin said at a campaign rally in Fairfax Monday where he unveiled his “Day One Plan.”

Despite Democratic gains, polls show the race is competitive. A Monmouth poll out Tuesday showed McAuliffe with a slight lead over Youngkin among registered voters, 47% to 42%, but Youngkin held an edge among independents, 44% to 38%.

While the Monmouth poll showed Youngkin leads among voters who describe themselves as being more enthusiastic in this year’s race compared with past contests, abortion rights could galvanize voters on both sides of the debate. Given the demographic shifts in the commonwealth, that enthusiasm may aid McAuliffe more.

“The Supreme Court has just given Terry McAuliffe a gift two weeks before early voting starts,” said Larry Sabato, the founder and director of the University of Virginia’s Center for Politics and a longtime watcher of the commonwealth’s politics. “The problem for Youngkin is that Virginia is decidedly pro-choice, especially in vote-rich Northern Virginia. Independents are mainly pro-choice, too.”

Sabato said abortion has mattered in past Virginia elections, usually in Democrats’ favor. He cited 2013’s gubernatorial race, when McAuliffe won by a slim 2.5-point margin. Also bolstering the Democrats, Sabato said, is the “growing belief” that the conservative Supreme Court is moving toward overturning Roe v. Wade.

However, he added, “It isn’t all bad for Youngkin. He’ll run up the score in conservative pro-life rural areas using this issue. It’s just that rural areas don’t pack the electoral punch they once did.”