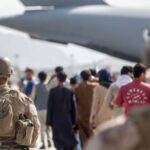 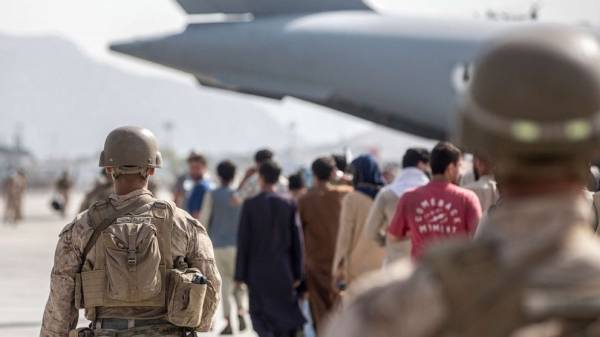 On the fourth day of waiting, “Ahmad” had enough. He left Kabul airport, heading back through the Taliban checkpoints and bringing his family of five home.

Desperate for safety and security for his wife and three children, he felt he had no choice but to step back into the fray with his family in search of food, water and a reprieve from the brutal heat.

Stories like Ahmad, whose real name ABC News is not using for his safety, speak to the deteriorating conditions at Kabul’s airport, where thousands of U.S. troops and diplomats are working in overdrive to help evacuate tens of thousands of U.S. citizens, Afghan partners and other foreigners.

So far, the U.S. has evacuated roughly 30,300 people since the Taliban seized control of Afghanistan a little over one week ago, according to a White House official.

Outside the airport’s walls, chaotic crowds have tried to press into the airport, now closed except to those given specific instructions to enter. At least seven people have died in the crush, according to an internal State Department memo obtained by ABC News. Taliban fighters guarding checkpoints around the airport have fired into the air to disperse crowds or beaten them back with whips and rifle butts, including some U.S. citizens and lawful permanent residents.

“More than 10,000 Afghans surrounded the gates and conditions remained volatile outside the gates,” the internal situation report said Sunday.

But inside, where thousands have been processed and are waiting for a seat on a flight out, crowds have been forced to sleep on the tarmac and spend days in the blazing hot sun. While troops from the U.S., United Kingdom, Turkey, and elsewhere have distributed food and water, the enormous size of the crowds has meant some people go without for days.

“Our overriding priority remains to put as many people as possible on departing planes as quickly as possible. Within the past 24 hours, nearly 60 flights have departed, bringing nearly 8,000 people to safety,” a State Dept spokesperson told ABC News Sunday.

Ahmad decided that he could not wait any longer for help, according to an American who works closely with him and spoke to ABC News on a condition of anonymity.

“This is a man who has been waiting for a long time for his SIV to come through, who has been directly threatened by the Taliban. And yet, when so close to his dream of safety and protection, he decided it was safer to go back home than to keep his family in this U.S. military-run facility any longer,” the source said.

Another source, an American on the ground at the airport, told ABC News the situation was a “non-permissive environment,” which is a term diplomats, aid workers and troops use for difficult conditions where uncertainty and instability make it unsafe to operate.

Among the issues now are a group of unaccompanied minors, which are children that separated from their parents amid the crowds or in certain cases deliberately. Video of a family passing their infant child to U.S. Marine went viral earlier this week, with a Marines spokesperson later confirming that the baby was given needed medical attention and reunited with its father.

But four children are not so lucky. A source on the ground said that their father was killed by the Taliban, and their mother was trampled to death in the stampede outside the gates this week, leaving them orphaned and waiting in the passenger terminal, according to the source, who said U.S. officials are unable to find any next of kin and don’t know what to do with them.