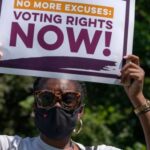 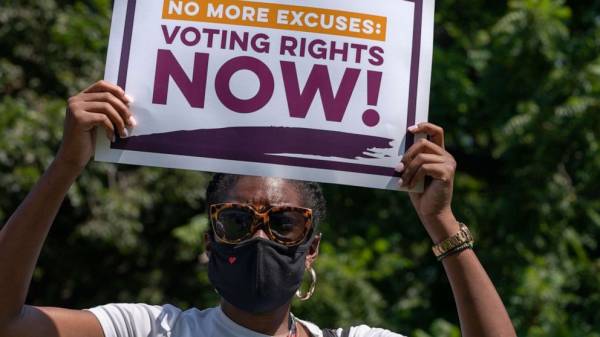 The legislation, named after the late civil rights icon, passed the House with a final vote of 219- 212. There was no Republican support.

MORE: Voting rights legislation sits in Congress while states move ahead with reforms

HR 4 would restore the pre-clearance formula from the Voting Rights Act of 1965, which was struck down by the Supreme Court in 2013.

Section 5 of the Voting Rights Act, a key provision that mandated federal review of local election laws and states with a history of voter discrimination, was removed after Shelby County, Alabama, filed a lawsuit in Washington, D.C. The Supreme Court ruled that requiring states to seek approval from the Department of Justice prior to changing voting procedures was unconstitutional.

Jacquelyn Martin/APLaQuita Howard of Washington, with the League of Women Voters, attends a rally for voting rights, Aug. 24, 2021, near the White House in Washington.

“It is unpatriotic to undermine the ability of people, who have the right to vote and to have access to the polls. As John knew, this precious pillar of our democracy is under attack from what is the worst voter suppression campaign in America since Jim Crow. Unleashed by the dangerous Shelby v. Holder as mentioned in 2013, in 2021 state lawmakers have introduced over 400 suppression bills,” House Speaker Nancy Pelosi said during a debate on the House floor.

Pelosi stood with Rev. William Barber, president of Repairers of the Breach and a co-chair of the Poor People’s Campaign, along with other voting rights advocates Wednesday, to make a moral argument for a federal voting rights legislation.

During House Debate on HR.4 on Tuesday, Republicans blasted the bill as a “federal takeover of elections” and a “power grab” by Democrats who would undermine the state election process.

Kevin Dietsch/Getty ImagesA voting rights activist holds a sign that reads “Pass The For The People Act” during a voting rights rally outside the White House, Aug. 24, 2021, in Washington, DC.

Alabama Democratic Rep. Terri Sewell, who authored the bill, told reporters that federal intervention is necessary to combat what Democrats describe as voter suppression across the country.

“Old battles have become new again,” Sewell said in a joint presser with Rep. Sheila Jackson Lee, D-Texas, and Democratic state lawmakers from Texas who have remained in the nation’s capital after “fleeing” their home state to break quorum over six weeks ago to prevent a new state election law.

“When we see states running amuck, we need federal oversight. If it wasn’t for federal oversight, we not only would not have gotten the Voting Rights Act, we wouldn’t have gotten the Civil Rights Act. After the Shelby v. Holder decision, we saw states like North Carolina and Texas reinstate restrictive voting laws and those voting laws are suppressive, oppressive, and depressive. They stop the people who need to vote from voting,” Sewell said Tuesday.

The House passed an older version of the voting rights act last year following the death of Lewis, but it ultimately stalled. The bill now faces a similar uphill battle this year as it moves to the Senate, where there is strong Republican opposition in the evenly divided body.

Previous : In private, Qatar warn US officials of ‘growing crises’ at bases housing Afghans: Internal report
Next : Gov. Kathy Hochul to New Yorkers: ‘You will find me to be direct, straight-talking and decisive’