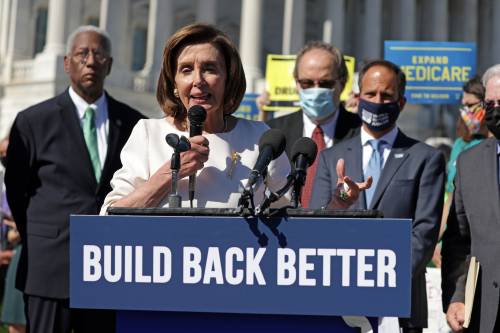 Democratic leaders seem to be winnowing their health care plans for this Congress around one clear goal: filling the holes in Obamacare.

Lawmakers appear likely to prioritize proposed fixes to the Affordable Care Act in the forthcoming budget reconciliation bill, but some of the party’s other ideas for expanding health coverage may end up getting cut out of the legislation.

When Obamacare passed in 2010, it was supposed to achieve universal insurance coverage — or something close to it — by fixing holes in the existing health care system.

But as it turned out, the 2010 law has holes of its own waiting to be fixed. The uninsured rate has dropped significantly since the ACA was enacted: Just about 10 percent of people in the US lack health care coverage today, compared to nearly 18 percent in 2009. But that still leaves 27.4 million people without insurance.

The Supreme Court ruled in 2012 that states could choose whether to expand their Medicaid programs, and 12 states never did — leaving 2 million people with no health coverage, a disproportionate share of whom are people of color living in the South. Other uninsured Americans include people who are not eligible for government assistance (either because of their immigration status or because, until recently, they made too much money to qualify) and can’t afford it on their own, as well as people who are eligible but have not, for whatever reason, signed up for benefits.

Democrats’ newest health care measure, part of their Build Back Better budget reconciliation bill, tries to close those gaps, though they will again fall short of reaching universal coverage.

Some Democrats also have other goals: Many progressives want to expand Medicare benefits to cover dental, hearing, and vision care. But Congress may still have to scale back the health care section of the reconciliation legislation if centrist Democrats continue to balk at a plan to cap prices for prescription drugs. If those plans must be cut to get the bill passed, Congress and the White House could end up having to decide which parts of their agenda to pass now and which ones to postpone.

Should it come to that, dealing with some of the ACA’s unfinished business seems likely to be Democratic leaders’ top priority.

Why Obamacare still has so many issues to fix

When Democrats set out to reform health care in 2010, they made a choice: Rather than fundamentally changing US health care by creating a single-payer system or an aggressive public option to compete with private insurers, Democrats tried to patch up the existing system through Medicaid and the individual commercial market.

The law gave government help to middle-class people who buy private coverage; it also intended to expand Medicaid to people whose incomes were at or below 133 percent of the federal poverty level.

That design was dictated, in part, by concerns about cost. The Obama White House promised to craft a health care proposal that would pay for itself to meet demands from more conservative members of the Democratic Party. Expanding Medicaid was projected to be cheaper than subsidizing private coverage. Cutting off subsidies for private individual insurance at 400 percent of the federal poverty level — today, that equals about $51,500 for one person and around $88,000 for a family of three — brought the bill’s cost down too.

But these choices ultimately made coverage unaffordable for millions of middle-class Americans.

Pent-up demand for medical services drove insurers’ expenses higher than they had anticipated. Premiums increased significantly during the years after the law’s marketplace opened, though they eventually stabilized.

People getting federal assistance were protected; their own costs were fixed, while the federal government picked up the cost of premium increases. But people with incomes too high to qualify faced the full brunt of rate hikes — and many of them dropped their ACA-compliant coverage as a result. Enrollment among those ineligible for assistance dropped by more than 3 million from 2016 to 2018, according to the Kaiser Family Foundation.

This became one of the ACA’s most obvious failures. In the American Rescue Plan (ARP), Democrats expanded the law’s subsidies to people earning above 400 percent of the federal poverty, and an estimated 235,500 of those who became newly eligible have enrolled in coverage this year, according to federal data.

However, the ARP authorized the new subsidies for only two years. The new reconciliation bill would make them permanent.

The other problem with Obamacare was unexpected. In 2012, the Supreme Court ruled 7-2 that the Medicaid expansion was too coercive and that states needed to be able to choose to opt out.

Although the expansion was still a really good deal for states — the federal government covered 100 percent of the cost for the first three years, and 90 percent in perpetuity as of 2020 — a dozen states are still holding out, seven years after the expansion first took effect. Those states are concentrated in the South; Texas and Florida account for more than half of the 2.2 million people in poverty who have been left uncovered because of their state’s opposition to the expansion.

Closing the expansion gap was also already a priority for Democrats in the ARP. In that bill, Congress offered an additional financial incentive for the holdout states: a temporary boost in their traditional Medicaid funding. But none of them have taken that deal in the six months since it passed.

So Democrats have concocted a new plan. They would initially cover people stuck in the Medicaid expansion gap through private insurance on the ACA markets, before eventually transferring them into a newly created federal program that would replicate the coverage they would have received through Medicaid.

It sounds clumsy, but that’s because Democrats have been trying to walk another legal tightrope as they’ve worked on a fix for the expansion gap. They don’t want to create a situation where the states that refused the expansion are getting a better deal than the states that accepted it, opening themselves to another lawsuit.

The ACA improvements would drive the number of uninsured Americans down by several million — 3.9 million, according to Congressional Budget Office projections — another incremental step toward universal coverage.

But the fixes in the bill alone are not sufficient to get the US caught up to the rest of the developed world, where universal health care is assured. And neither would any of the other proposals Democrats are considering.

Many Democrats now view the ACA as a political winner, having run on the law in the last two elections. The proposed improvements to Obamacare probably enjoy the most widespread support among the party’s majorities in Congress.

But as in 2010, Democrats may soon have to make important decisions about which policies to push through and which ones to cut out. They have thin majorities, again, and the more conservative wing is once more putting pressure on leadership to constrain the size of the legislation.

Recent comments from House Speaker Nancy Pelosi, her allies, and center-left Democrats suggest that fixing the ACA would be the first priority.

Other plans to achieve universal coverage — an aggressive public option or a single-payer Medicare-for-all — are still divisive among Democrats, and they face stiff opposition from the insurance industry. The party isn’t trying to pass them with the narrow majorities it currently has in Congress.

Progressive Democrats have other ideas about how to improve health care, short of Medicare-for-all. These include adding to and improving Medicare benefits and making more people eligible for that program, which they hope will eventually serve as a vessel for single-payer health care.

At first, it appeared Congress would try to do all of this at once. The first draft of the reconciliation bill included not only the ACA fixes but also the expansion of dental, hearing, and vision benefits for Medicare’s 62.7 million beneficiaries.

But Congress faces the same kind of fiscal limitations now as when it was trying to pass the ACA: Centrists want the bill to be paid for, though some are also leery of major tax increases. Congress traditionally funds health care spending through health care savings, and those constraints could dictate the policy again. (Whole proposals, like a major funding infusion for long-term care, may end up being scrapped because of centrist disinterest and their demand to lower the bill’s cost.)

Prescription drug savings are supposed to cover the cost of most of the bill’s health care provisions. But those reforms are running into trouble with some Democrats who sound receptive to the drug industry’s arguments that the price controls Congress is contemplating would hamper medical innovation.

If Democrats are forced to scale back or scrap the prescription drug plan to assuage those concerns, they’ll need to either find new savings to pay for their spending — which may be hard, without making new industry enemies who would try to tank the bill — or they’ll likely start cutting some of their coverage proposals.

What would the priority be in the latter scenario? Democrats have already attempted to address these ACA issues in the American Rescue Plan. In comments last week, Democratic leaders again made the 2010 law sound like their top priority.

“I feel very proprietary about the ACA,” Pelosi said, according to NBC News. The No. 3 Democrat in the House, Rep. Jim Clyburn, said Medicaid expansion is his focus. A coalition of center-left Democrats is pushing House leadership to confine their health care agenda to these ACA remedies.

All of these health care proposals cost money. The ACA coverage provisions total about $550 billion in new spending, according to the Congressional Budget Office. New Medicare benefits would add as much as $350 billion over 10 years to the health section’s projected cost. It may simply cost too much, in the eyes of center-left Democrats trying to trim the size of the package, to do all of it at once. Still, progressives are strongly backing the Medicare benefit expansion.

Finishing the Obamacare project may be the safest bet for the budget reconciliation legislation — it has a real consensus within the party, and there are glaring problems that do need to be fixed.

But even if the Democrats patch up the ACA, they’ll simply be postponing the larger debate to come. The American health care system still has serious problems, and those problems are, in some cases, only becoming more acute.

Previous : Facebook’s name change plan is a reflection of its real priorities
Next : The Power of Dave Chappelle’s Comedy