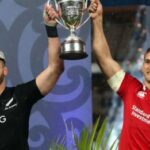 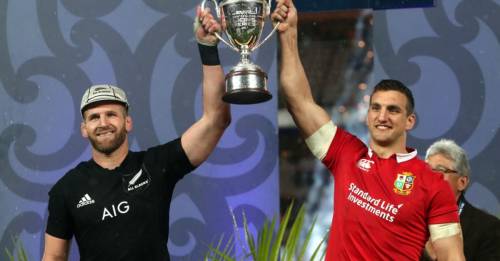 For the third tour in succession, the British and Irish Lions’ Test series comes down to a final-match decider.

South Africa won Saturday’s second Test to level the series at 1-1 and leave everything on the line in Cape Town this weekend.

Having lost the opening Test despite Sean O’Brien’s breathtaking team try, the Lions hit back to win the second 24-21 on Owen Farrell’s crucial late penalty.

That set up a winner-takes-all clash in Auckland – only for the spoils to be shared, as Farrell’s fourth penalty to go with a long-range Elliot Daly effort left the scores tied at 15-15. A late penalty seemingly awarded to the All Blacks was ultimately deemed a scrum instead and the Lions held on.

The first two Tests were as tight as could be, Australia’s Kurtley Beale slipping to miss a potential match-winning penalty in the first while Leigh Halfpenny was off target in the second.

The third, though, saw Halfpenny inspire one of the all-time great Lions performances in a 41-16 win. The Wales full-back set up tries for Johnny Sexton and George North and kicked a Lions-record 21 points in the Test and 49 on the tour.

Tries from Jason Robinson and Jonny Wilkinson gave Graham Henry’s side hope in the decider and the scores were tied with 12 minutes left, but Matt Burke kicked two Australia penalties and Justin Harrison’s lineout steal denied the Lions the chance of a match-winning try and sealed a 29-23 success for the Wallabies.

That is the last time a team came from one Test behind to win a Lions series, the feat South Africa will be looking to match on Saturday.

A 2-1 win over South Africa in 1997 was wrapped up before the third Test but 1993 had been decided by the smallest of margins. Gavin Hastings’ sixth penalty appeared to have given the Lions victory in the opening game only for Grant Fox to hit back in the last minute – and the 20-18 win would prove crucial.

The Lions impressively won the second Test 20-7, Rory Underwood with a memorable try, and led the decider 10-0 only for the All Blacks to hit back in style for a 30-13 success after tries from Frank Bunce, Sean Fitzpatrick and Jon Preston.

Recovering from a 30-12 opening loss, the Lions won the second Test 19-12 thanks to late tries from Hastings and Jeremy Guscott.

Of the 22 Lions series across 19 previous tours since the second world war, exactly half have gone into the final game with the series result still on the line.

That includes three four-Test series and three two-Test encounters in which the team trailing had the chance to level the series, as well as the aforementioned five tours since 1989 with the now-established three-Test format.

The Lions have won five, drawn two and lost four of those deciders, with 1971’s draw against New Zealand earning a 2-1 series win. The All Blacks won in 1977 to clinch a 3-1 win, meaning South Africa’s win in the 1955 decider led to the only drawn series prior to 2017.

The three two-Test series were all against Australia on split tours headlined by New Zealand, with the Lions running out 2-0 winners on each occasion.

Previous : Expert at murder trial: Uber rider stabbed up to 120 times
Next : Footballs should be sold with warning about dementia risk, prof says