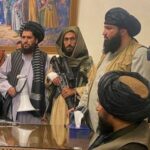 How the Taliban uses social media to seek legitimacy in the West, sow chaos at home 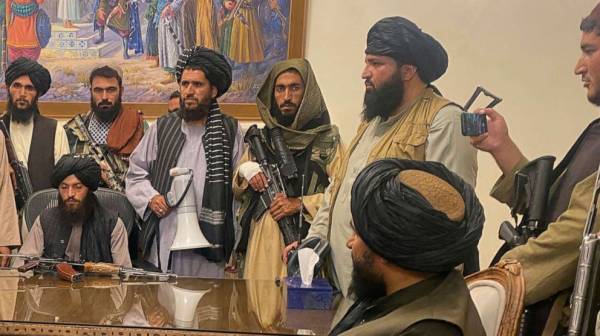 It seems like history may be repeating itself — the Taliban is once again in control of Afghanistan after 20 years of the War on Terror there.

The development is alarming and dismaying, despite (widely dismissed) assurances from the group — decried by the U.S. State Department as having “had one of the worst human rights records in the world” and giving safe harbor to al Qaeda — that they have changed.

One thing that is different since the last time the group was in power is its widespread adoption of social media and the power that having a largely unregulated propaganda platform brings.

Social Media HO/via ReutersA man, who purportedly is a Taliban militant, holds a wireless microphone as he speaks on the street in Kabul, Afghanistan, in this still image taken from social media video uploaded Aug. 16, 2021, and supplied by a third party.

The Taliban now has the ability to communicate directly with the rest of the world, as well as to control the narrative around events as it has been trying to do for years at home and abroad through a barrage of messages on social media. Experts say it effectively did an end around the Afghan government through its unrelenting publicity campaign, capitalizing on disinformation and a lack of media literacy.

While photos and videos emerging from Kabul from journalists and residents depict crisis and desperate attempts to flee, Taliban-controlled handles assure that the city is “completely stable and normal.”

Experts say the Taliban’s recent online broadcasting of messages that seem at odds with the ruthlessness and oppressive policies they were known for is part of a sophisticated social media strategy that is aimed at deceiving the West and vying for legitimacy on the international stage after the unexpectedly swift collapse of the Afghan government in recent days.

“The Taliban has had a social media strategy for many years now … they use multiple social media platforms to get their messages out,” Tom Joscelyn, a senior fellow at the Foundation for Defense of Democracies, a nonprofit think tank in Washington, D.C., told ABC News. “They’re responding faster — more quickly than even the Afghan government did to events.”

A flood of messages

According to the World Bank’s most-recent data from 2017, only 11.4% of the population of Afghanistan were using the internet — a sharp increase from the 0% figure when the Taliban was last in power, but still lagging behind much of the rest of the world’s 49% benchmark. It also suggests that the Taliban’s target audience is actually outside of the nation.

MORE: Biden says he did not see a way to withdraw from Afghanistan without 'chaos ensuing'

Their local audience, meanwhile, is victim to Afghanistan’s dilapidated media infrastructure, which makes it difficult for fact-checkers on the ground to effectively counter false statements put out by the party in power. Moreover, as with many parts of the world, researchers have said poor internet literacy in the region compounds the risk of propaganda being taken for fact.

Joscelyn said the group’s spokesman Zabihullah Mujahid — who held a widely-viewed press conference Tuesday — has been active on Twitter for years. The Taliban also issues messages online in multiple languages on a regular basis, Joscelyn said, including English, Arabic, Pashto and Urdu.

“In fact, I think they probably publish messages in more languages on daily basis than maybe even the [U.S.] State Department,” he said.

While crackdowns on extremism online have pushed many bad actors associated with terrorist groups to the fringes of the internet, the Taliban operates largely unhindered on Twitter. The U.S. State Department has not designated the Afghan Taliban as a terrorist group (a label that would more explicitly break policies), and private firms largely take their cues from the government on these matters, putting social media firms in often difficult-to-navigate situations. The high-profile decision of multiple platforms to ban former President Donald Trump, for example, drew ire from even vocal critics of Trump as the nation mulled over social media’s double-edged sword that some say democratizes free speech and others say weaponizes it.

In contrast to Twitter, Facebook says the Taliban has been banned on its platform for years under its “dangerous organizations” policies, citing how the U.S. sanctions the group as a terrorist organization despite not including them on the State Department’s separate list. Facebook said accounts maintained by or on behalf of the Taliban are removed, and a team of multilingual local experts are working to identify emerging issues on the platform.

“Facebook does not make decisions about the recognized government in any particular country but instead respects the authority of the international community in making these determinations,” the company told ABC News in a statement. “Regardless of who holds power, we will take the appropriate action against accounts and content that breaks our rules.”

Meanwhile, there are half a dozen Taliban officials active on Twitter, with a combined 1 million followers, according to data from Adrienne Goldstein, a research assistant at the German Marshall Digital Fund think tank. Their recent tweets largely seem to be trying to cast the Taliban as peaceful, stable, and overall more palatable to the West — messages that the group’s leaders have repeated in press conferences.

MORE: Why ransomware cyberattacks are on the rise

While many may assume their Tweets are rife with disinformation and propaganda, a September 2020 study published in the peer-reviewed journal Media Asia supported this by examining the Taliban’s use of Twitter and their attempts in framing what was unfolding in Afghanistan compared to information being put out by media outlets and advocacy groups.

The study, conducted in 2018, long before the current crisis, found that in the Taliban posted more messages on Twitter than the Ministry of Defense, and in more languages. Moreover, the analysis found vast discrepancies in what the Taliban said happened on Twitter and what media and civilian protection groups stated.

Social Media HO/via ReutersMullah Baradar Akhund, a senior official of the Taliban, seated with a group of men, makes a video statement, in this still image taken from a video recorded in an unidentified location, supplied by a third party and released on Aug, 16, 2021.

“Belligerents are actively using online platforms where they do not hesitate to frame and disseminate disinformation that suit their desired intention,” the study stated. “Observing discrepancy in terms of the number of casualties between the parties and mainstream media shows propagandistic traits.”

The study suggested that the Taliban has capitalized on social media in part because its use does not require advanced infrastructure or media expertise. Having comparatively limited resources, the Taliban makes up for it by posting and sharing online more often than the Afghan government did. The study warned of the potential dangers of their “disinformation” in a region where many are not equipped with media and information literacy.

Interestingly, the research also noted that during the Taliban’s previous governance from 1996 to 2001, internet use of any kind was strictly prohibited.

Calls for a crackdown

Joscelyn said the issue of vulnerability to disinformation extends outside of Afghanistan — and that’s something the Taliban capitalized on. “They know a lot of people are gullible, and that a lot of people will just repeat what they say without thinking.” He thus believes Twitter “should have been cracking down on the Taliban a long time ago.”

“I think they allowed the Taliban to develop a sophisticated social media ecosystem,” Joscelyn said. “I mean in a lot of ways, they were ISIS before ISIS in terms of the behavior and what they do, from suicide bombings to the oppression of women to the harsh Sharia law they’re going to implement.”

“All the nasty things that are associated with ISIS, the Taliban did before them and yet — if ISIS popped up on social media sites or Twitter feeds or Telegram channels, or any of these different platforms, generally they’re more receptive to shutting them down,” he added. “But with the Taliban, they’re allowed to exist for years on end with the same handles, same channels.”

Twitter told ABC News in a statement that they “remain vigilant” about the situation in Afghanistan in response to an inquiry about why these accounts are allowed to operate.

“The situation in Afghanistan is rapidly evolving, and we’re witnessing people in the country using Twitter to seek help and assistance,” the company said. “Twitter’s top priority is keeping people safe, and we remain vigilant. We will continue to proactively enforce our rules and review content that may violate Twitter Rules, specifically policies against glorification of violence and platform manipulation and spam.”

As the Taliban rapidly seized power, Joscelyn said the group’s social media strategy has helped contribute to the Afghan’s suffering by sowing disinformation that is repeated without question by global media outlets.

“They want to speak the West’s language to lull the West to sleep, and they’ve been very successful with that,” he said. “There are a lot of people who’ve been gullible and who have parroted Taliban talking points without any thought.”

Previous : Biden doubles down on Afghanistan amid struggling evacuation effort: The Note
Next : Capitol Bomb Threat Suspect Who Wanted President Biden to Resign Surrenders to Police