The G.O.P.’s Race to Out-Trump the Trumpists

Anyone in need of a warning about what the 2022 midterm elections could bring might consider what took place last month at a candidates’ forum sponsored by the Republican Women of Coffee County, Alabama. Katie Britt, a contender for the Republican nomination to replace Senator Richard Shelby, who is retiring, was asked if she had supported Roy Moore in the 2017 special Senate election. Moore is the Constitution-defying judge who was accused of sexually pursuing teen-age girls; he denied the allegations, but lost to the Democratic candidate, Doug Jones. “I have never supported or voted for a Democrat in my life,” Britt said, but added, “I also think it’s important to stand with women.” That hedged response appeared to provoke the next candidate to speak, Representative Mo Brooks, who accused her of lacking party loyalty. “We are a team,” he said. “We have a belief system.” 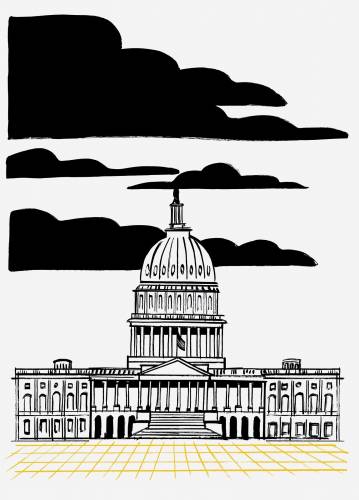 What was most notable in this exchange was Britt’s reply: she accused Brooks of being the disloyal one. “Every single time, I voted for Donald Trump, and stood with him,” she said. “That wasn’t the step you took.” During the 2016 Presidential primaries, Brooks initially supported Senator Ted Cruz. But the congressman is now best known for the speech he gave at Trump’s January 6th Save America rally, in which he told the crowd that the time had come for “kicking ass.” At a more recent Trump rally, he warned of “godless, evil, amoral socialist Democrats.” Trump has enthusiastically endorsed Brooks, and has derided Britt, who once served as Shelby’s chief of staff, as an unqualified “assistant” to a “RINO.” Britt has the backing of Alabama’s business establishment, yet she apparently thought that her best move was to try to out-Trump an unapologetic insurrectionist.

She’s not the only one. Earlier this month, Senator Chuck Grassley, of Iowa, a purported establishment figure who, at eighty-eight, is running for an eighth term, came onstage at a Trump rally in Des Moines. “If I didn’t accept the endorsement of a person that’s got ninety-one per cent of the Republican voters in Iowa, I wouldn’t be too smart,” Grassley said, grinning. The number he cited came from a Des Moines Register poll, which also found that Trump’s favorability rating was forty-eight per cent among Iowa independents. A CNN poll last month indicated that, nationally, seventy-eight per cent of Republicans believe that Joe Biden was not legitimately elected President. Increasingly, they seem to expect their party’s candidates to agree.

With the Senate divided fifty-fifty, just to maintain a status quo in which Biden’s agenda depends on the whims of Joe Manchin, of West Virginia, and Kyrsten Sinema, of Arizona, Democrats need to concentrate on holding on to Mark Kelly’s seat, in Arizona, and to Raphael Warnock’s, in Georgia. (Both men won in special elections, and are seen as vulnerable.) Or they need to pick up seats, perhaps in North Carolina or Pennsylvania, where the incumbents are retiring, or in Florida, where Representative Val Demings is challenging Marco Rubio. In the House, the Democrats’ margin is just eight seats, and midterm voters tend to turn against the party of the incumbent President. At the moment, Biden’s approval rating has dropped to forty-three per cent. The task for Democrats could hardly be more crucial: so much depends on so few seats—including, possibly, another Supreme Court appointment.

The numbers aren’t all that matters. Even if the Democrats hold the Senate, the dynamic there will change for the worse if their Republican counterparts are more Trumpist—more conspiracy-minded, more jingoistic, more convinced that the people on the other side of the aisle are godless, evil, amoral socialists. Such a caucus would be even more likely to engage in reckless acts of obstruction and conflict. The effect would almost certainly be more exaggerated in the House, where the Marjorie Taylor Greene contingent will likely grow. As the average level of extremism in Congress rises, it becomes harder to tell true believers from opportunists. The former President, banished from Twitter, can appear marginalized, yet the G.O.P. is heading into the midterms with Trump as its leader.

Earlier this year, when Trump began talking about handing out endorsements, Mitch McConnell, the Senate Minority Leader, said that he would push back if he thought that Trump’s choices would cost the G.O.P. seats. Last month, though, McConnell told Politico, “I don’t believe they’re troubling.” (The exception appears to be in Alaska, where Trump’s effort to bring down Lisa Murkowski hasn’t gained traction.) McConnell was seemingly content with Brooks, and with Trump’s endorsement of Herschel Walker, the former football player with a tumultuous business and personal life who has promoted election-fraud conspiracy theories and will challenge Warnock, in Georgia. “There’s every indication he’s going to be a good candidate,” McConnell said. Whether he would be a good senator didn’t seem to matter.

In Pennsylvania, Trump has endorsed Sean Parnell, a retired Army captain who has written several military-themed books (“Outlaw Platoon,” “Left for Dead”), joined a lawsuit in his state to get mail-in ballots thrown out, and is in the middle of a contentious divorce. His main primary opponent, Carla Sands, was a Trump donor and his Ambassador to Denmark; she got into trouble for posting pro-Trump tweets on her government account, a Hatch Act violation. There are similar stories in other states. This past spring, Trump pressured Mark Brnovich, the Arizona attorney general, who is challenging Kelly, to “get on the ball” in backing an audit of the 2020 vote in Maricopa County, and he did. (The results, released last month, actually increased Biden’s margin of victory.) Nevertheless, one of his rivals, Blake Masters, who is backed by Peter Thiel, the tech billionaire, is attacking him for not doing more for Trump.

Trump, meanwhile, has endorsed Mark Finchem, a state legislator at times associated with QAnon, in the race for Arizona’s secretary of state. (He pointed out Finchem in the audience at the rally in Des Moines.) Trump’s attentiveness to a race for a state election official is unsettling, given the pressure he exerted on such officials to shift results in his favor in 2020. The Republican leaders who defer to his preferences and echo his delusions now are building the scaffolding for his own next campaign. The nomination, at least, appears to be his for the taking. Ahead of 2022, G.O.P. candidates are scrambling for Trump’s endorsement. In 2024, he may be demanding theirs. ♦

Previous : Bounty Hunting for Brian Laundrie in a Land of Look-Alikes
Next : Paul McCartney on Writing “Eleanor Rigby”