Bounty Hunting for Brian Laundrie in a Land of Look-Alikes

Severin Beckwith and Anna Brettmann, a young couple from Ithaca, New York, have been hiking from Georgia to Virginia on the Appalachian Trail since late September. In western North Carolina, after a few days of hard rain and little sleep, they decided to take a break from the woods. A shuttle delivered them to the Lodge at Fontana Village Resort, a rustic retreat two miles off the trail, where they ate lunch and lay down for a midday nap. Knocking awoke them. There was a muffled voice outside their door. It burst open before Beckwith could unlock it. 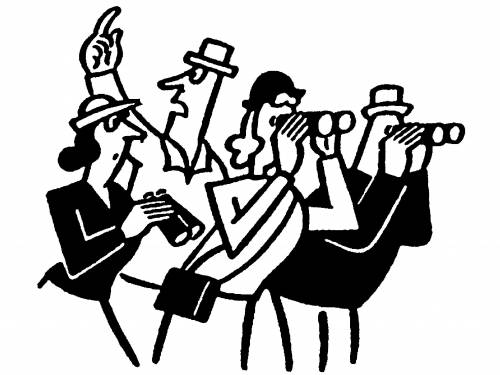 “Next thing I see is a bunch of guys with riot shields with ‘U.S. Marshals’ written on them,” Beckwith said. “Handguns pointed at my face.” Brettmann was still in bed. A marshal helped her get dressed as they handcuffed Beckwith, still in his underwear, and took him out to the hallway. He had a hunch why this was happening. “I really hoped I was right,” he said.

Beckwith resembles Brian Laundrie—the fugitive and person of interest in the killing of his fiancée, Gabby Petito—in the way that most white male long-distance hikers resemble Laundrie: skinny and pale, with a shaved head and a beard. The preponderance of such men, perhaps, has made the Appalachian Trail a locus of the manhunt among the amateur set. There’s also the fact that Laundrie has been known to hike the trail, and that it is regarded, mostly by those who’ve never hiked it, as a place to go if you want to disappear. An engineer from Florida was “99.99 per cent sure” that he saw Laundrie looking “wigged out” near the trail.

Days earlier, someone else had clocked Beckwith as resembling Laundrie. But the marshals had seen more than a passing similarity. One of them touched the side of Beckwith’s head and noted that he had, as Beckwith said, “a notch in the upper part of my inner ear just like his.” On top of that, Beckwith and Brettmann had booked their room with a credit card linked to a New York I.D.—Petito was from New York—“which, I guess, was good enough motive to come in.”

But Beckwith didn’t have Laundrie’s hand tattoos. His I.D. didn’t have Laundrie’s name on it, either. The marshals fingerprinted Beckwith (“They had to use our hotel Wi-Fi password,” Beckwith said, “because they were having trouble with their Bluetooth fingerprint thing”) and suggested that he shave his beard—which he did but “immediately regretted,” he said, “because I have much less of a chin than Laundrie does.” They told the couple that they now had a good story to tell. Then they left.

Who had alerted the marshals to the presence of a Laundrie look-alike? Beckwith remembered a moment earlier that day at the Fontana Lake marina, where they’d gone to call the shuttle. An employee had responded strangely to his request to use the telephone. He’d also, it turned out, taken Beckwith’s picture and passed it along to the authorities. A marshal showed the picture to Beckwith after kicking in his door.

“They had a little side-by-side,” Beckwith said. “It was Brian and then me on the phone calling to get the shuttle.”

For their unique troubles, the lodge gave Beckwith and Brettmann a free night’s stay—in a room with a working lock—and free breakfast. “It was a buffet,” Beckwith said. “We took as much as we could.”

A few days later, Maria Guzman, who runs Standing Bear Farm Hostel, a week’s walk down the trail, in Tennessee, met Beckwith and Brettmann while out for a hike. They told her the story.

“He does look like Laundrie,” Guzman said later. “But so do thousands of people.” A fellow-hiker attempted to give Beckwith a trail name, as is customary for long-distance hikers: the Fugitive. This was, Beckwith felt, “a bit too on the nose.” Instead, he went with Not Brian, which, he said, “basically covers it.” Guzman promised the couple a free pizza if they stayed at her hostel, which they ended up doing. Their luck was turning.

Guzman mentioned the Laundrie look-alike to her friends Tina Simerly and Xander McDouall, a local couple who were also searching for the fugitive. Simerly and McDouall are neither amateur sleuths nor government agents: they run a local bounty-hunting outfit called Predator Hunter Nation. (Duane Chapman, a.k.a. Dog the Bounty Hunter, was also on Laundrie’s trail recently, until he injured his ankle.)

“Mostly pedophiles,” Simerly said, describing their quarry. “But not exclusively.” She went on, “There are sightings all over Hartford” —a nearby town. “And nobody is paying attention.” She added, “Our friend Hunter, he saw him at the Citgo in Hartford, in a brown Ford Escape.” The bounty hunters discussed the reward being offered for information leading to Laundrie’s capture. “Last I heard, it was a hundred and seventy thousand,” Simerly said.

“One-eighty now,” McDouall said. “That’s half the reason people are even looking. But not us. We’re looking for this guy because he’s a predator.” He paused, and went on, “He’s a pretty generic-looking dude, though, really. People say I look like him, too.” ♦

Previous : The Evolution of an Empire, at Momofuku Ssäm Bar
Next : The G.O.P.’s Race to Out-Trump the Trumpists