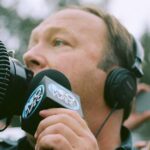 Although the host of InfoWars has fallen out with the Republican over a number of issues, he remains one of Trump’s staunchest supporters and even backed his claims that the 2020 presidential election was stolen by the Democrats.

Alex Jones has raised eyebrows after he decided to subject former president Donald Trump to some harsh criticism. During the latest edition of InfoWars, Jones played a recording of Trump’s speech at a rally in Alabama, during which the politician backed vaccines against coronavirus.

The 47-year-old’s statements caused anger on social media as users laid into the journalist for supposedly spreading lies.

​Other users joked that Jones finally got something right.

​Many users wondered why Jones, a staunch supporter of Donald Trump, decided to criticise the former president.

​Others were excited about an upcoming war of words between Trump and Jones.

​Still others called on the public to get vaccinated.

​Jones is known for his anti-vaccination stance. He once claimed that a character in Sesame Street, a TV show for children, was designed to normalise autism, which Jones alleged was caused by vaccines.

Donald Trump has been taken to task for not publicly supporting the use of vaccines against COVID-19. The pandemic has prompted numerous conspiracy theories with some people claiming that the inoculations are unsafe or were designed to stop overpopulation and to control people. It is for this reason that many high-profile politicians across the world got inoculated in public view to allay concerns.

A poll  by Monmouth University in New Jersey, US, revealed that Republican voters – and Trump supporters in particular – are opposed to getting the coronavirus vaccine. Experts say that vaccine hesitancy may thwart the world’s opportunity to win the upper hand in the fight against the pandemic, which, according to Johns Hopkins University, has claimed 4.4. million lives.

Previous : Gardening: What to do when the soil stays too wet
Next : G7 States Agree on Roadmap for Dealing With ‘Probable’ Taliban Government, Not on Evacuation’s End