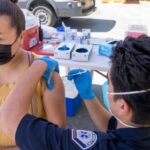 More businesses are mandating COVID-19 vaccines. Is that legal? 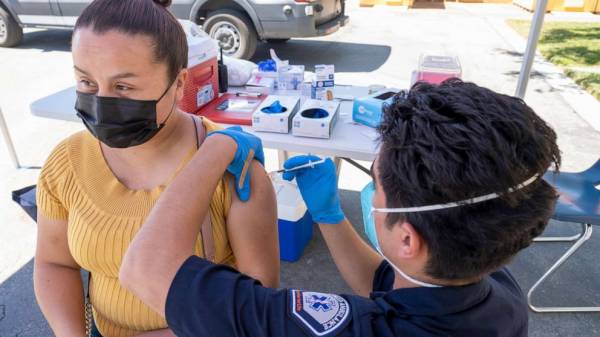 With the delta variant surging, some businesses have begun announcing COVID-19 vaccine mandates for employees with some exceptions on religious and medical grounds.

The announcements have led to relief for some and strong opposition and protests for others as well as a handful of states introducing legislation to block them.

While there may be opposition to those policies, ultimately the mandates — which also come as efforts stagnate to reach the remaining unvaccinated Americans — are on solid legal ground, public health experts contend.

In the last two weeks, private companies big and small, such as Google, the NFL and Disney (the parent company of ABC News) and many public offices, have announced that vaccines are mandatory for staff before they return to offices in the fall.

In addition, the federal government and some states are issuing testing mandates for any of their public employees who aren’t vaccinated.

Los Angeles Daily News/MediaNews Group via Getty ImagesA woman gets a COVID-19 vaccination from an EMT at a Medi-Vaxx Program of the San Fernando Valley pop up clinic at the Montague Charter Academy in Arleta, Calif., Aug. 2, 2021.

In a few localities, such as New York City, proof of vaccination is required for indoor activities such as movies and restaurants — actions that take a harder line to incentivize vaccination.

The subject is tricky given that the vaccines are not fully approved by the Food and Drug Administration, the Centers for Disease Control and Prevention have said vaccines will not be federally mandated and public health officials have largely been trying to incentivize inoculation rather than making it compulsory given the hesitancy in the population.

Dr. Howard Koh, a former assistant secretary for health for the U.S. Department of Health and Human Services, told ABC News that there will be more organizations that follow suit given the rise in coronavirus cases among the unvaccinated, and they have solid arguments for the policies.

“Businesses want to go forward and they know that their status quo isn’t working,” he told ABC News.

Here’s what to know:

States have over a century of legal precedent for mandating vaccines, according to Koh, who currently serves as a professor of the practice of public health Leadership at the Harvard T. H. Chan School of Public Health.

The courts have not determined if the federal government can issue a vaccine mandate, however, the Supreme Court’s decision in the 1905 case Jacobson v. Massachusetts gave state governments the power to issue such a mandate.

The 7-2 decision ruled that Massachusetts’s smallpox vaccine mandate was constitutional stating, “it is for the legislature, and not for the courts, to determine in the first instance whether vaccination is or is not the best mode for the prevention of smallpox and the protection of the public health.”

All states and the District of Columbia have mandated vaccines for ailments such as measles, rubella and polio, for school-age children, although requirements differ by state. There are also a range of exceptions, most commonly medical and religious reasons.

As of June, 44 states and Washington, D.C., grant religious exemptions for people who have religious objections to immunizations, according to the National Conference of State Legislatures, which tracks the state regulations. Fifteen states that allow philosophical exemptions for children whose parents object to immunizations because of personal, moral or other beliefs, the NCSL found.

The situation is largely different for adults, for whom vaccines are generally not required for employment or in other forums. However, in certain states, such as New York, there is a requirement for health care workers, for instance.

Koh added things get tricky when it comes to a federal mandate.

“The president, from what I can tell, can not announce a federal mandate. No federal vaccination mandate has ever been tested in court,” he said.

There is some legal uncertainty around the current batch of COVID-19 vaccines because they are being administered under an emergency use authorization from the FDA, Koh said. Opponents to vaccine mandates have argued states or businesses cannot enforce mandates unless the inoculations have received full approval.

But a ruling by the Department of Justice’s Office of Legal Counsel last month, ruled that Section 564 of the Food, Drug, and Cosmetic Act doesn’t prohibit private businesses from mandating vaccines. States and local municipalities, however, still have the power to prohibit a vaccine mandate within their own offices.

Koh noted that the Justice Department’s ruling has given private and public businesses the legal backing to order their own mandates.

“I think it’s not only reasonable, but I think it’s part of what’s going to, I think, nudge more people to get vaccinated while making it even safer for those who are vaccinated to be able to get back to their way of life, which is what we all want,” he told ABC News.

Once the vaccines get full approval, there will be more push from all sectors to mandate the vaccine, Dr. Anthony Fauci, the director of the National Institute of Allergy and Infectious Diseases, told the Center for Strategic and International Studies on Tuesday. Pfizer’s approval could come as early as September.

“You’re not going to see a central mandate coming from the federal government, but you’re going to see more universities, colleges, places of business who, once they get the cover of an officially approved vaccine, they’re going to start mandating vaccines,” Fauci said.

There have been some signs that governors would change their rules once the vaccines get the full approval. During a virtual town hall Wednesday, Louisiana Gov. John Bel Edwards told residents he would do just that.

“It would be my expectation that once full authorization or sometimes it’s called licensure is granted, then that vaccine will be added to the list, and then it will work just like the current mumps, measles, rubella, and other vaccines,” he said.

When it comes to local public government offices, rules for vaccine mandates differ and in a handful of states, mandates on the COVID-19 vaccines have been banned outright until full approval.

ABC News, NASHP.orgStates that have enacted bans on vaccine mandates

As of Aug. 4, six states have enacted legislation in the last year that would block state and municipal offices from mandating a COVID-19 vaccine among staff members. Those six states and another six also have laws that prevent schools from issuing mandates.

Only one state, Montana, has banned private businesses from issuing a vaccine mandate.

Some of the states with bans, such as Alabama, North Dakota and Arkansas, have lagged behind the rest of the country when it comes to vaccinations and seen a jump in cases, according to the CDC. Alabama’s seven-day average of new cases has jumped from nearly 200 at the beginning of July to over 2,500 this week, CDC data shows.

During a news conference Tuesday, President Biden urged governors to lift restrictions on businesses and schools so they could increase vaccination numbers.

“I say to these governors, please help. But if you aren’t going to help, at least get out of the way,” he said.

Koh noted that the vaccine order that Biden borrowed from New York and other states that required unvaccinated public employees to get tested weekly.

Koh and other experts contend the rule from the president and other leaders would ensure that workspaces would have fewer outbreaks and give those unvaccinated workers a bigger push to get their shots.

MORE: NYC, California turn to COVID testing mandate to boost vaccination numbers — will it be enough?

It also gives the states firmer legal standing because the testing mandate doesn’t lead to a termination or penalty for the unvaccinated employee, they noted.

Ultimately, Koh said the biggest motivator for vaccine mandates will be from the private businesses. Their efforts will force the public sector to enact stricter measures, he argued.

“Our country has been trying to tame this pandemic for 18 months and counting. The other [vaccination] measures until now have not been completely successful in getting us through this,” Koh said.

Previous : Anti-vax? Be prepared to pay more for insurance: Analysis
Next : What is a HIPAA violation?