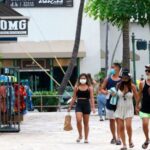 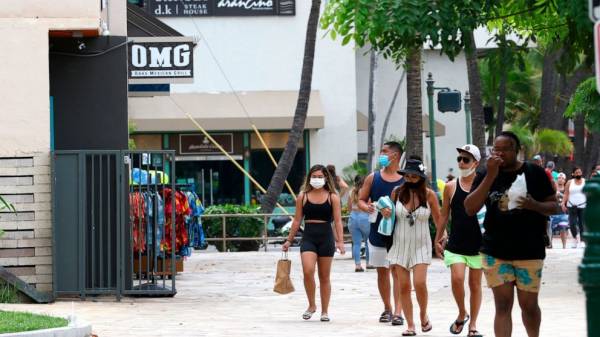 HONOLULU — Kuulei Perreira-Keawekane could barely breathe when she went to a Hawaii emergency room. Nausea made it difficult for her to stand and her body throbbed with pain.

Like many Native Hawaiians, she was not vaccinated against COVID-19.

Perreira-Keawekane’s situation highlights the COVID-19 crisis that is gripping Hawaii as hospitals are overflowing with a record number of patients, vaccinations are stagnating and Hawaiians are experiencing a disproportionate share of the suffering.

Hawaii was once seen as a beacon of safety during the pandemic because of stringent travel and quarantine restrictions and overall vaccine acceptance that made it one of the most inoculated states in the country. But the highly contagious delta variant exploited weaknesses as residents let down their guard and attended family gatherings after months of restrictions and vaccine hesitancy lingered in some Hawaiian communities.

Now, the governor is urging tourists to stay away and residents to limit travel, and leaders are re-imposing caps on sizes of social gatherings. And in an effort to address vaccine hesitancy, a group of businesses and nonprofits launched a public service campaign Thursday aimed at Native Hawaiians, many of whom harbor a deep distrust of the government dating back to the U.S.-supported overthrow of the monarchy in 1893.

The campaign reminds Hawaiians that they were nearly wiped out by disease in the 1800s and that the kingdom’s rulers at the time pushed people to get vaccinated against smallpox.

About 20 Hawaiian leaders stood in rows 6 feet (1.8 meters) apart Thursday at a statue of Queen Liliʻuokalani, the kingdom’s last monarch, imploring people to wear masks and get vaccinated to ensure the survival of the Indigenous people of Hawaii.

“Not only was I afraid of the needles and just putting it off, putting it off, but I didn’t have enough information about the vaccine and that distrust was just very real,” said Perreira-Keawekane.

She now plans to get vaccinated. Still, she doesn’t consider herself pro-vaccine, or anti-vaccine.

“Having to choose one or the other is the root of trauma for native people,” she said. “You can shout data at the top of your lungs, but if it has nothing to do with people we know, it’s not real.”

Overall, 62.1% of Hawaii is fully vaccinated. But Hawaiians have among the lowest rates; estimates show it’s at about 40%.

Honolulu Emergency Services Department Director Jim Ireland said that on a recent morning, there were four COVID-19 patient 911 calls in a row for Nanakuli, a community that’s home to many Native Hawaiians. He noted that vaccination rates are lower on the west side of Oahu.

The thought behind the campaign focusing on increasing Hawaiian vaccination rates is that messages to the public so far haven’t been adequate, said Nāʻālehu Anthony, director of COVID Pau, a collaborative of businesses and nonprofit organizations delivering public health messages during the pandemic.

“We’re telling people to get the vaccine ’til we’re blue in the face,” Anthony said. “But that’s not necessarily all of the story as to why it’s important to get a vaccine. And part of that is the relationship to who’s asking you to do it.”

At a Monday news conference, Gov. David Ige, who is not Hawaiian, acknowledged he’s not the ideal messenger: “We do know that sometimes my making statements are not the most motivational for many others.”

Earlier in the pandemic, Native Hawaiians had among the lowest rates of infection and embraced safety measures such as trading honi, a traditional forehead-to-forehead greeting, for elbow bumps or shakas from a distance.

That changed around May during the time of year when people celebrate graduations and weddings.

The irony is not lost on some that a popular reason for Hawaii family parties today originated during a time when Hawaiians would hold big celebrations for a baby’s first birthday, which was a real feat in the face of measles until a vaccine was available.

“I do think that it’s sad and kind of a little bit ironic that luau, in a lot of cases, have become places where people get sick,” said state Sen. Jarrett Keohokalole.

Andria Tupola, a Hawaiian city councilwoman who represents west Oahu, said one way government leaders are out of touch with her constituents is not respecting people who want to make their own decisions.

She recently disclosed that she wasn’t vaccinated because she had tested positive while visiting Utah, but felt healthy enough to go running every day. She has also been instrumental in organizing vaccination clinics.

The backlash she faced over her vaccination status isn’t helping convince people in her community to get vaccinated, she said.

“If you have to crucify me and make an example out of me in front of my community … if you think somehow that’s going to make people want to do it, it’s like that’s the opposite because people trust others and they respect others in our community,” she said.

Keaweʻaimoku Kaholokula, chair of the Department of Native Hawaiian Health at the University of Hawaii’s medical school, said he didn’t expect some Hawaiians to shun the vaccine. “It’s very American, which is ironic — very individualistic — to behave this way,” he said.

“I think our people need to remember that a part of our culture is protecting each other over our own self-interest,” he said.

Keoni Payton, a clothing designer on the Big Island, is not vaccinated, but supports those who choose to get vaccinated. “I’m pro-choice on what you put in your body and body autonomy,” he said.

The messages about how kingdom rulers mandated the smallpox vaccine in the 1850s doesn’t resonate with him.

“As Hawaiians, we haven’t been treated fairly with the U.S. government,” he said. “They stole our land and now they’re stealing our bodies.”