The Culinary Playground of Fulgurances Laundromat

Sometimes, in New York City, a laundromat is a restaurant and a restaurant is a concept and a concept is a culinary playground in the shape of a chef residency. Such is the case with Fulgurances Laundromat, which is tucked into a refurbished laundromat in Greenpoint and features meals from the imaginations of young talents who are, for the first time, fully in control of their own kitchen. 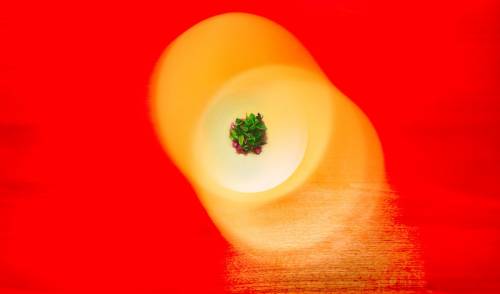 The restaurant presents multicourse prix-fixe dinners that reveal themselves in the course of a night.

To encourage and accommodate the spirit of experimentation, Fulgurances Laundromat does not proffer menus but instead presents multicourse dinners that reveal themselves throughout the night. The current resident, Aaron Rosenthal, a Boston native who has worked in France for the past nine years, said that he was still figuring out his style, which likely accounted for the breadth of his offerings, like so many laboratory petri dishes, in a recent evening’s first course: fennel-topped mussels that emanated musk and brine, mullet roe wrapped in marinated kohlrabi, and a knockout crab-ají beignet that synthesized the best qualities of a crab cake and a cinnamon doughnut. 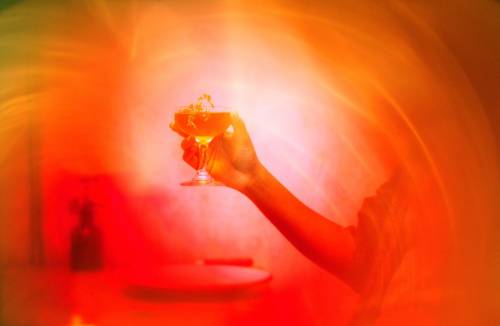 The current resident chef is Aaron Rosenthal, who has worked at various restaurants in France for the past nine years.

Rosenthal is fascinated by sourcing, an interest cultivated during his time as the executive chef of Clamato, a sister restaurant of Septime, Paris’s vegetable-obsessed foodie destination. “If the product is quality, you don’t have to compensate with over-seasoning,” he explained while preparing the second dish, a play on beef tartare that substitutes meat with tiny cubes of beet, layered with smoked eel and horseradish and nestled below a wreath of herbs. Rosenthal tried beets after failing to find beef that met his standards. “Frankly,” he said, “it really tasted better.” Smoked seafood appeared again in a dish of poached and smoked Connecticut oysters steeped in a satiny consommé, the oysters’ sea-metallic scent coaxing out the earthiness of a shallot-and-miso purée. “I like it when the ingredients’ natural flavors are kept alive in the final dish,” Rosenthal said. 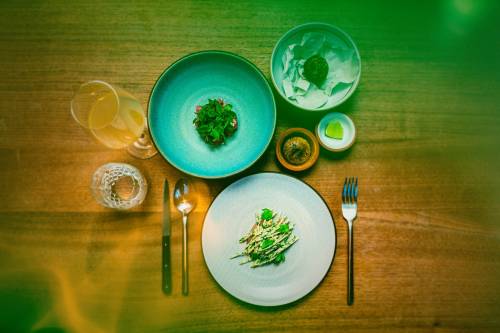 Rosenthal characterizes his cooking as French “bistronomy,” favoring relaxed and accessible over stuffy and elaborate.

When pressed, Rosenthal characterized his cooking as French “bistronomy,” which favors relaxed and accessible over stuffy and elaborate. For an entrée, Amish guinea hen was cooked low and slow, the better to “preserve the natural umami.” A sweet-onion soubise sauce and a meat jus infused with Concord grapes were supposed to pep up the bird, but, as with a Parisian cheek kiss, the effect was more of a gesture. The addition of a salted egg yolk was slightly strange if not entirely unwelcome, given the pitilessly modest portion of meat, which I wolfed down in three mouthfuls.

Rosenthal’s predilection for eclectic assortments of small bites serves diners well when it comes to dessert, which comprised no fewer than four courses. The most original was a single tablespoon of honey still attached to the comb, spritzed with champagne vinegar. This was transitional honey, Rosenthal explained: made with the pollen of maple and black-locust trees, it was thicker and darker than summer honey, with a toastiness and a toffee-like texture. It paired beautifully with a golden fermented tea infused with chrysanthemum pollen. 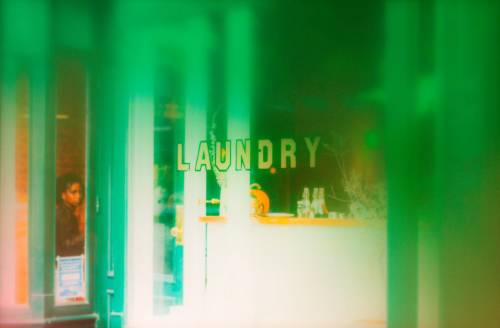 Fulgurances Laundromat is tucked into a refurbished laundromat in Greenpoint, Brooklyn.

It’s not surprising that a parfait should appear on a bistro menu, but Rosenthal adds depth and subtlety with caramelized scraps of honey, orange-blossom cream, and Bon Bon dates. “The Fulgurances kitchen is my tremplin,” Rosenthal told me. “I’m blanking on the English word—you know, the big thing you can jump on?” He was referring to a springboard, and the description is apt; recipes and ideas bounce around his head like brilliant flashes—which is the translation of fulgurances. “Ideas are like lightning strikes,” he added. “I like to experiment and see what comes up.” Rosenthal has one more month to capture lightning at Laundromat before handing the baton to Alexia Duchêne, a twenty-six-year-old who competed on France’s “Top Chef.” “That’s the thing about Fulgurances,” Rosenthal said. “Like lightning, it’s also ephemeral. After playing for a bit, I’ll eventually have to figure out what to do in real life.” (Prix fixe $80.) ♦

Previous : American democracy is tottering. It’s not clear Americans care.
Next : January 6 texts from Fox hosts reveal the lie at the heart of the conservative movement