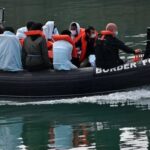 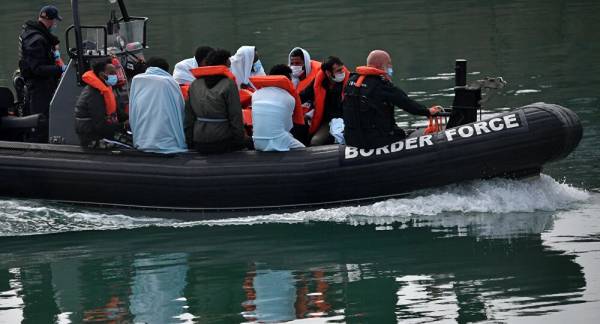 The number of migrants arriving in the UK by boat has already hit 10,500, more than the entire tally registered in 2020.

Hundreds of migrants who entered Britain by crossing the English Channel on small boats remain missing after they absconded from their hotels, the Daily Mail has quoted unnamed sources as saying.

The sources added that government ministers had held urgent discussions between departments over “the tracking” systems responsible for monitoring asylum seekers’ movements after most of them arrive in the UK from France by boat.

©
AFP 2021 / BEN STANSALLMigrants picked up at sea whilst Crossing the English Channel, but intercepted but intercepted bu UK Border Force officials, travel in a RIB with as they are brought into the Marina in Dover, southeast England on August 15, 2020. (Photo by Ben STANSALL / AFP)

When in the UK, the migrants are accommodated in hotels, where they are due to quarantine for ten days before being processed. About 10,000 hotel beds across Britain are now reportedly taken up by the migrant arrivals, with hotels block-booked by the Home Office until January for the purpose.

Last week, the Daily Mail reported about 55 migrants being housed in a fancy hotel in central London, where they were “allowed to come and go as they please” and where the rooms are equipped with wi-fi, air conditioning systems, and flatscreen TVs.

©
AFP 2021 / GLYN KIRKUK Border Force officers help migrants, believed to have been picked up from boats in the Channel, disembark from Coastal patrol vessel “HMC Speedwell”, in the port of Dover, on the south-east coast of England on August 9, 2020. – The British government on Sunday appointed a former marine to lead efforts to tackle illegal migration in the Channel ahead of talks with France on how to stop the dangerous crossings. (Photo by Glyn KIRK / AFP)

Paris insists that maritime law obliges French patrol vessels to stop the migrants’ boats only if they seek help or need rescuing. London, however, asserts, that the rules of the sea envisage the interception of “illegal” efforts by migrants to enter UK waters.

Over 37,000 Migrants Have Disappeared in UK Over Past 30 Years, Home Office Says

In late December 2020, the UK Home Office revealed that at least 37,302 migrants living in Britain have disappeared in the country over the past three decades.

Commenting on the matter, a Home Office spokesperson said at the time that “while even one absconder is unacceptable, this is historic data that covers a period of over 30 years and many of these individuals have likely left the country”.

The spokesperson pointed out that London has “a dedicated national absconder-tracing team working with the police, other government agencies, and commercial companies to track down and bring absconders back into contact with the Home Office”.

Alp Mehmet, chairman of the watchdog Migration Watch UK, expressed concern over the Home Office figures, which he said was a sign that Britain’s immigration system doesn’t work.

The remarks came after the Home Office confirmed an incident earlier in December, when at least eight asylum seekers went missing from a former army barracks in Kent that was being used to house refugees.