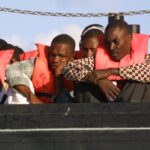 Biden is turning back Haitian migrants at sea, echoing a shameful chapter in US history 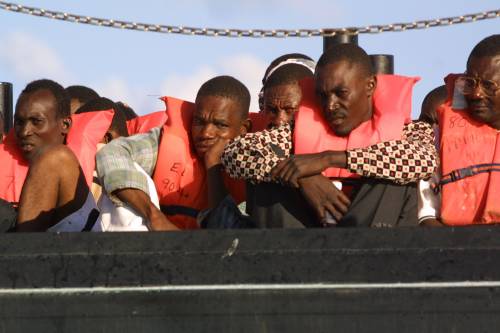 The US could soon be facing dual migrant crises stemming from unrest in Haiti and Cuba. In response, the Biden administration has preemptively warned migrants not to try to come to the US by boat.

Homeland Security Secretary Alejandro Mayorkas recently confirmed that any migrants intercepted by the US Coast Guard off US shores will not be allowed to enter the country — they will be turned back or, if they express fear of returning to their home countries, repatriated to a third country.

“The time is never right to attempt migration by sea,” Mayorkas said in a press conference earlier this month. “To those who risk their lives doing so, this risk is not worth taking. Allow me to be clear: If you take to the sea, you will not come to the United States.”

The policy isn’t new. Past administrations, both Republican and Democratic, have employed this interdiction approach to prevent Caribbean migrants from reaching US shores. But although it was always done under the pretense of protecting migrants from the very real dangers of that journey, it resulted in many Haitians being returned to certain peril in their home country over the years and, under the administrations of Presidents George H.W. Bush and Bill Clinton, languishing in what one federal judge called a “prison camp” at Guantanamo Bay, Cuba, where they were held after being intercepted at sea.

A. Naomi Paik, a professor at the University of Illinois Chicago, studied testimonies from those migrants for her book Rightlessness: Testimony and Redress in US Prison Camps Since World War II. So I called her up to ask her more about the US’s history of intercepting Haitian migrant boats, what became of the migrants held at Guantanamo, and how the Biden administration can better address the humanitarian needs of Haitian migrants coming to the US today.

Our conversation, edited for length and clarity, is below.

When have we seen the US interdicting Caribbean migrants coming by boat before?

We’ve already been doing this for a long time, particularly against Haitian migrants. This is not a new idea. It is a bipartisan issue promoted by both Democrats and Republicans. And so Biden is basically drawing on this tool of interdiction that has been well-developed.

The policy originated under Ronald Reagan. He brokered a deal so that the Haitian government would accept returnees and restrict migration between the US and Haiti. The concern over Haitian migrants has been a longstanding one over multiple administrations, but Reagan added that transnational piece where we patrol international waters for the specific purpose of turning away migrants.

George H.W. Bush escalated the interdiction program in the early ’90s after the coup d’état against [Haitian President] Jean-Bertrand Aristide. The coup targeted large swaths of civil society. Tens of thousands of Haitians were forced to leave their homes. And so he authorized the [US] Coast Guard to interdict migrants and then turn them back.

Is this practice legal?

The legitimacy of [Bush’s policy] was challenged in court. It was a series of three cases filed by Haitian migration advocates against the US state for turning them back right away and for indefinite detention at Guantanamo. Those cases went all the way to the Supreme Court, which ruled that it was within the powers of the president.

I know you’ve written about the detentions at Guantanamo. Could you describe what the conditions were like?

The camp at its peak had tens of thousands of migrants. It was very makeshift in its architecture and its provisions for the migrants. You had these large tents set up on this airfield that was no longer active. But as more and more people started coming, they didn’t even have cots. They were sleeping on the ground on cardboard, and the food provisions were sparse.

There was a large ad hoc bureaucracy that was managed primarily by the US military but also had to involve immigration authorities and translators to facilitate interviews [for potential protections in the US] and match people who passed their interview with family members in the US.

But there’s another iteration of the camp that was much smaller, that had several hundred detainees who could not go back to Haiti by international law because they had passed their asylum interviews, but they weren’t allowed into the United States because some of them or their family members were found to be HIV-positive.

Instead of being under these large tents, they had cabins, but there was no glass in the windows, no partitions setting off rooms for privacy. They were exposed to the weather and the elements. The food was really terrible. Some of the migrants would talk about how the food was spoiled and had maggots in it.

These people were stuck in Guantanamo for years, waiting for these court cases to work their way through the courts. They put a lot of hope in President Bill Clinton, because during the campaign he said that he was going to let them go, that this was a terrible stain on the US.

And then when he was elected, he did nothing. The only exit that they were offered was to go back to Haiti. All of them were at risk of dying if they returned, so there was really no choice at all.

What ultimately happened to the Haitians who were detained there?

The vast majority of migrants who passed through Guantanamo were returned to Haiti. A much smaller percentage were able to be paroled into the United States because they passed their asylum interviews.

A court case that challenged indefinite detention at Guantanamo was actually successful at the district court level. A judge ruled in favor of the migrants, basically saying that the US government either had to make the camp livable — providing real health care, real housing, education — or they had to release the migrants to anywhere but Haiti. And so [the Clinton administration] decided to release the migrants into the United States because there were no third countries that wanted to take them.

Could the US ever use Guantanamo as a migrant detention camp again?

That case gave the Clinton administration political cover to allow Haitian migrants into the United States. But the Justice Department also threatened to appeal the decision to a higher court, which would have risked [the migrants’ lawyers] losing and having all their clients stay in detention for the duration of the appeal.

So they brokered a deal. The US government said, “We’ll let these migrants in. But we want to keep some flexibility. We don’t want this decision by the lower court to have any precedent. So we’ve vacated the precedent.”

And so that is a really important court case in terms of thinking about what’s happening at Guantanamo now. The torture memos that enabled the use of Guantanamo [to detain terrorism suspects after 9/11] cite that case and say that because the precedent has been vacated, this site can be used for indefinite detention.

There have been contingency plans around having a migrant camp at Guantanamo. So it’s always been in the US’s toolbox for migration management.

How can the Biden administration do better this time around when it comes to Haitian migrants?

This is the bigger question about migration altogether — not even just for migrants who travel by sea or asylum seekers from the Caribbean. We as a country need to hold ourselves accountable for creating those conditions that force people to move out from their homelands.

And so, to me, it seems to be the most logical to not base this system around detention, social control, and exclusion. I think some of the most repressive policies in US migration policy today have been innovated against Haitian migrants, like [extending migration control beyond] US territorial space.

We now do this with Mexico and with Central America, paying other governments to do our border restriction for us. And what’s most troubling is that it’s kind of growing and spreading well beyond the United States — look at Australia’s policies or Europe’s in the Mediterranean, for instance.

We have to get rid of the idea that migrants are problems to be controlled and expelled, and think about migrants as people who are leaving because of things that we’ve done to where they live.

You talk in your book about US imperialism being at the root of Haiti’s instability and out-migration. Could you describe what you mean by that?

You have to go back to the birth of Haiti as a nation altogether. This nation was born from the insurrection of enslaved people against their masters, against one of the most wealthy colonies of one of the most powerful imperial nations in the world at the time [France]. That was terrifying to nations that relied on a slave economy, including the United States.

People talk about Haiti’s indemnity to France [in which, following the Haitian Revolution, France forced Haiti to pay it 150 million francs to compensate for enslavers’ loss of income, in exchange for France’s recognition of the former colony’s independence] and about how that debt was managed and financed through international and US banks.

So we actually owe a debt to Haiti for having kneecapped this young country from the very get-go, economically and then also politically. You have to think about the US military interventions in Haiti, including our military occupation in the early 20th century. We supported dictatorial regimes and then undermined democratic regimes that were trying to stand up against the US. We had economic policies that were very extractive.

We have to actually think about this in the kind of long scope of how not just the United States but much of the world has cast out this country and created the conditions where Haiti is the poorest country in the Western Hemisphere.

Previous : Medical debt was cut nearly in half in states that expanded Medicaid
Next : Kylie Jenner Goes Topless Wearing Only Gold Glitter to Promote Make-up Collection