For four and a half million years, early hominids survived on a plant-based diet—seeds, nuts, roots, tubers. Around 2.6 million years ago, one of our ancestors got the idea to impale another terrestrial mammal with a sharp-edged tool, leaving butchery marks on its bones, later discovered as fossils by archeologists in the Ethiopian highlands. Today, some Homo sapiens still cling to the old ways, calling themselves vegetarian or, in their most traditionalist form, vegan, and envision a future in which the natural order is restored. At Délice & Sarrasin, a charming French bistro in the West Village, vegans can bide their time in style, enticing new recruits with the beau ideal of meatless haute cuisine. 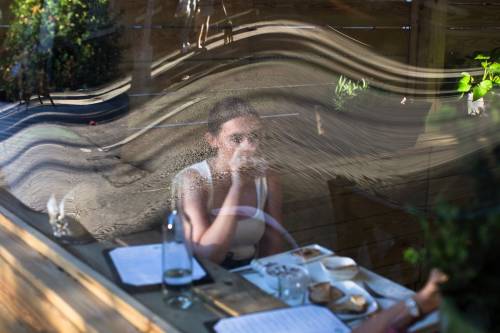 Yvette Caron, Délice & Sarassin’s head chef, sources her wines from vineyards—in Alsace, Bordeaux, Burgundy, and Provence—that do not use animal-derived fining agents, such as casein and gelatin, in their filtration process.

Vegan French cookery exposes an interesting paradox. On one hand, the very existence of Délice & Sarrasin and restaurants like it serves as a critique of animal farming—see, you can eat well without inflicting violence on sentient life-forms. On the other, Yvette Caron, Délice & Sarrasin’s head chef, does not wish to alienate the omnivorous, a good number of whom she counts among her patrons. She has tactfully sprinkled her menu with all the animalic terms that we accept as unremarkably normative: “Brie,” “duck,” “salmon.” The kitchen is stocked with none of these, of course, only their vegetal reinterpretations at the hands of an imaginative chef. 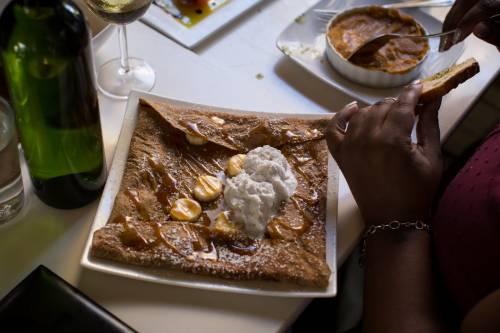 “Sarrasin” is the French term for “buckwheat,” the flour used in the savory galettes.

One metric for assaying the quality of a self-consciously vegan dish (that is, a dish featuring imitation meat or dairy) is the extent to which it approximates the sensory attributes—the mouthfeel—of the real thing. By this standard, the crab cakes at Délice & Sarrasin, presented with a savory cashew-based tartar sauce, are beyond reproach. My father, a longtime pescatarian, tried them and wove a theory (in jest, sort of) that the kitchen is serving actual crab to unsuspecting herbivores. “This is crab cake,” he kept saying, indiscreetly. (Rest assured, the “crab” cake is made of dehydrated lemon peel, yellow bell pepper, and seaweed marinated in soy sauce; wheat flour provides the crust.) In the tournedos Rossini, pan-seared Impossible Burger, subbing in for filet steak, fooled us both. In taste tests, half of the respondents can’t distinguish the company’s bioengineered products from actual meat. PETA has called the fatty, iron-dense patty “probably the unhealthiest veggie burger on the market”; in other words, it’s delicious. 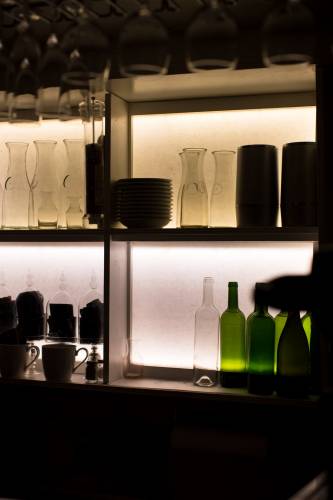 PETA has called the Impossible Burger, which takes the place of the filet steak in Caron’s tournedos Rossini, “probably the unhealthiest veggie burger on the market”; in other words, it’s delicious.

You can also evaluate a vegan dish on its own terms, mentally setting aside whatever fleshy alias it’s been assigned. Producing authentic foie gras entails force-feeding a duck or a goose; it’s banned in California and about a dozen countries, and will become illegal in New York City next year. Not wishing to seem impolite, I once sampled the stuff as a dinner guest at the home of a Frenchman living in Park Slope. Caron’s cruelty-free version—made from tahini, cashews, garlic, onion, cloves, ginger, nutmeg, and cardamom—is fruitier, nuttier, and silkier, and comes with homemade fig jam and sourdough bread. Who cares if it’s not a perfect simulacrum of a bizarrely produced luxury food whose obsolescence is long overdue?

For the escargot, Caron replaces snails with thinly sliced oyster mushrooms, which she glazes with white wine and cooks in a sauce of pulverized cashews, coconut, garlic, and parsley. They pass for neither snails nor oysters, but they stand out all the same. Why not call them délicieux champignons and be done with it? 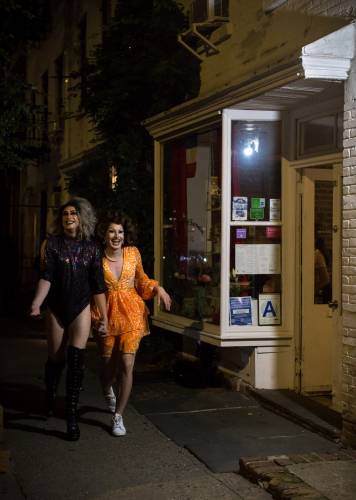 Perhaps the best dish in the house is one that’s not trying to be something else. The ratatouille, a canonical medley of stewed vegetables, involves sautéing coarsely cut garlic, onions, eggplant, zucchini, tricolor bell peppers, and heirloom tomatoes before combining them with various herbs in a rich, floral mélange. By some alchemy, every bite retains the full, distinct flavor of each ingredient. It tastes like, well, garlic, onions, eggplant, zucchini, peppers, tomatoes, and herbs—and isn’t missing anything at all. (Entrées $14-$35.) ♦

Previous : Anthony Doerr’s Optimism Engine
Next : A Portrait of the Writer as a Young Woman