With the original Barbuto, Jonathan Waxman nailed the formula for a great neighborhood restaurant: cool location, lack of pretension, seasonal pastas, killer chicken. It opened in 2004, pre-meatpacking-district mania, on a quiet West Village corner below the photographer Fabrizio Ferri’s Industria studio—it didn’t hurt that models and celebrities might drop in after sessions—with garage doors that rolled up in clement weather and a chef’s table in the tiny kitchen, open for all to see. What they saw was calm, genial Waxman himself, doing his thing at a double-decker oven created by the master oven-builder Nobile Attie, making the traditional cuisine of the Italian Riviera feel fresh. 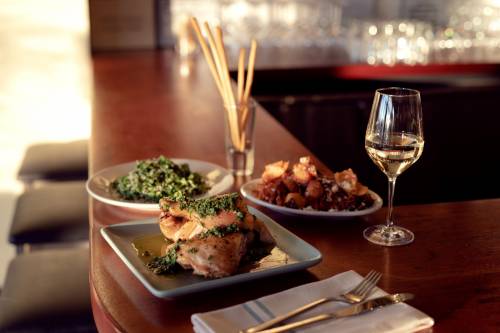 When Barbuto was forced to close, in May, 2019, after the building was sold, a collective cry went up from neighborhood fixtures and restaurant lovers alike. Waxman, ever assuring, found a new spot a couple of blocks away. He told me recently, “To be truthful, after sixteen years of doing business in that space . . . The building was falling apart, so to go into a new space—well, it’s an old space, but it’s a new infrastructure—was really advantageous for us. The only bad thing was we opened in February of last year, COVID happened, and we were only open for three weeks. What’re ya gonna do?” After the shutdown, Waxman quickly decided that takeout wouldn’t work, and so he waited until it was safe to reopen. “Vaccines were a game changer,” Waxman said. “The mandates by the city—in terms of, We don’t have to be the bad cop—that really helped my industry.” 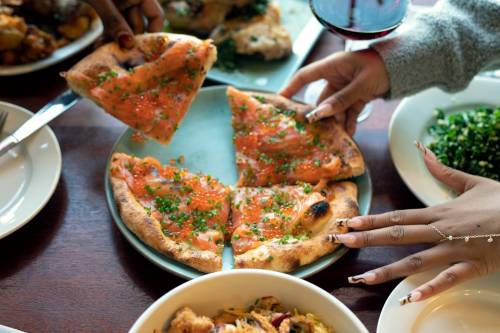 The smoked-salmon pizza, with avocado crème fraîche and smoked trout roe, is an homage to Waxman’s friend Wolfgang Puck.

What’s new at the new Barbuto? Besides the gargantuan room, lined with arched, brick-framed windows, not much. Barbuto means “bearded,” and the restaurant’s shaggy-dog logo, a likeness of Ferri’s (similarly well-bearded) Irish wolfhound, remains. Waxman has been cooking in élite circles since the seventies, when he worked at Alice Waters’s Chez Panisse, and there are roots to his past everywhere you look. Attie created an even bigger oven than the first one—a must for all the chickens Waxman serves. “I’ll have a dead chicken head on my grave, I’m sure,” he cracked. The dish evolved from a chicken frites that he cooked in 1979, at Michael’s in Santa Monica; then he did a grilled boned chicken at his first New York restaurant, Jams, in the eighties. Barbuto’s Pollo al Forno, an homage to Judy Rodgers’s Zuni Café roast chicken for two (he and Rodgers worked together at Chez Panisse), is half a bird, grilled and drizzled with a salsa verde of anchovies, capers, garlic, olive oil, parsley, and whatever other herbs are around. “We don’t brine it,” Waxman said. “Just sea salt and fresh pepper, and we kind of baste it with its own liquid as it cooks. And the big deal is resting—for a minimum of half an hour.” 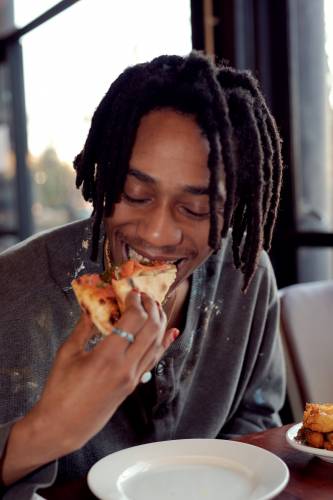 Many of the dishes, such as Insalata di Calamari, Bucatini alla Carbonara, and the pan-fried gnocchi, have an iconic air.

At brunch one cold afternoon, fluffy focaccia, an ideally lemony and garlicky bitter-lettuce salad with fried calamari, and a creamy bucatini carbonara were followed by a chewy-crusted smoked-salmon pizza with avocado crème fraîche and smoked trout roe. The pizza was described by the waiter—whose manner was so easygoing that it seemed as if he were just stopping by to chat—as an homage to “the chef’s friend Wolfgang Puck.” Waxman said that when Puck opened Spago, in 1982, “I walked in one day and Wolfgang goes, ‘I’m making this Jewish pizza,’ and I said, ‘What are you talking about?’ It was a pizza bianca with no cheese, just a little bit of shallots and crème fraîche, this homemade smoked salmon and caviar on top. And I said, ‘You know what? This is the greatest thing I’ve ever had.’ ” The waiter also brought free champagne, because, he said, it was the right thing to do.

Signature items are indicated on the menu with a JW insignia, but there’s no need—almost all of the dishes have an iconic air. It’s unusual for a Manhattan restaurant to take up so much space, and, in spite of the view of the West Side Highway and the river beyond, it feels like you could be pretty much anywhere. But the Whitney is just a block away, and Waxman’s crispy rosemary potatoes are gold. (Dishes $5-$39.) ♦

Previous : Should We Believe the Stories of Men Mistaken for Gods?
Next : Facebook still won’t give up Instagram for Kids