Choose Your Own Kandinsky Adventure at the Guggenheim

Choose a direction for your perusal of “Vasily Kandinsky: Around the Circle,” a retrospective that lines the upper three-fifths of the Guggenheim Museum’s ramp with some eighty paintings, drawings, and woodcuts by the Russian hierophant of abstraction, who died in France in 1944, at the age of seventy-seven. The show’s curator, Megan Fontanella, recommends starting at the bottom, with the overwrought works of the artist’s final phase, and proceeding upward, back to the simpler Expressionist landscapes and horsemen of his early career. This course is canny in terms of your enjoyment, which increases as you go. The teeming complexities of the enigmatic glyphs and contradictory techniques that mark Kandinsky’s late phase defeat my comprehension: they are numbingly hermetic. A middle range, from about 1910 to the early twenties, seethes with the artist’s excitement as he abandons figuration to let freely brushed, spontaneously symphonic forms, intended as visual equivalents of music, enthrall on their own. He became a devoted fan and friend of the atonal composer Arnold Schoenberg.

Finally—that is, primarily—we are engulfed in cadenzas of hue that have come to impress me as the strongest art of their kind and their time, relatively crude but more vigorous than the contemporaneous feats of Matisse, Derain, Braque, and other Parisians whose Fauvism anchors standard accounts of modernism. There’s much to be said for Der Blaue Reiter—a movement, centered in Munich, where Kandinsky had moved to study art, and which shares a name with one of his paintings, from 1903. It enlisted such colleagues of Kandinsky’s as Franz Marc and Alexei Jawlensky in the project of rendering nature with chromatic audacities. Seen from the bottom up, the show progressively dispenses with arid affectation on the way to freshets of inspiration. I took it from the top, beginning in joy and ending in downbeat perplexity, then returned upward to assess what had happened to a visionary who had been onto something epochal. 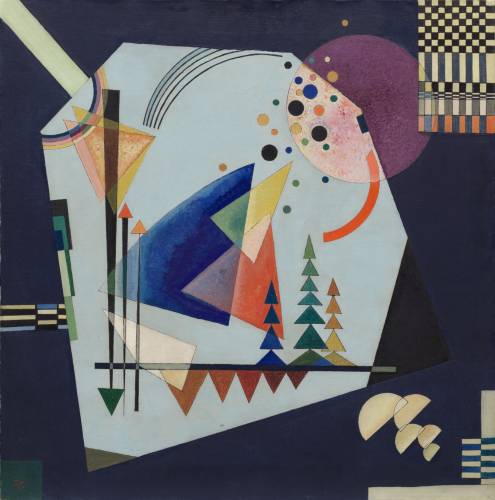 Kandinsky was right on time when he published the eloquent book “On the Spiritual in Art,” in 1911. It called for artists to reject materialism—a soul-crushing evil—in favor of, ideally, a worldwide spiritual awakening. He graphed artistic intention as a triangle with gross materiality at the bottom and perfect transcendence, true to inward experience, at the peak. He located previous artists at points in the ascent. His exhortation bore fruit in subsequent work that included the Orphism of the French painter Robert Delaunay, for one, who was shown with him in the vastly influential 1913 Armory Show, in New York. However, the drive for enlightenment would ultimately fall prey to self-seductions that led Kandinsky up desultory paths.

Kandinsky was born in Moscow in 1866. The son of a prosperous tea merchant, he moved to Odessa as a child, and then returned to Moscow to study law and economics. Smitten with a haystack painting by Monet and an intuition, from Richard Wagner’s opera “Lohengrin,” of synesthesia—sounds seen, colors heard—he began to paint, with a bang, at the age of thirty, on folkloric themes that were infused with the quasi-religious tenets of Theosophy. As he would write in the 1911 book, “Color is the keyboard. The eye is the hammer, while the soul is a piano of many strings. The artist is the hand through which the medium of different keys causes the human soul to vibrate.” His initial variations on nature gave way to spontaneous gestures and energized shards of geometric form. Some intoxicating breakthrough paintings include “Black Lines” and “Light Picture” (both from December, 1913), which stage dances of liberated line atop passages of effulgent color.

Kandinsky hit on a symbiosis of mysticism and geometry that had affected religious traditions (the European Gothic, the Indian tantra) since well before its ancient Greek codification, notably by Pythagoras: a force field in which the least rational of entities, the soul, meshes with the utter rationality of mathematical design—the latter subliminal but still present in Kandinsky’s brushy manner. The conjunction had never before been consistently addressed in fine art. And Kandinsky wasn’t alone in seizing on it in the early years of the twentieth century, as a wildly and justly popular show in 2018, also at the Guggenheim, of the all but unknown (partly because she was secretive, surely because she was female) Swedish painter Hilma af Klint (1862-1944) proved. Af Klint, for those keeping score, seems to have beaten Kandinsky to the punch of modern abstraction by five years. She did so most dramatically with a suite of huge, stunning floral and geometric paintings, begun in 1906, whose genesis she attributed to dictation from named supernatural beings. 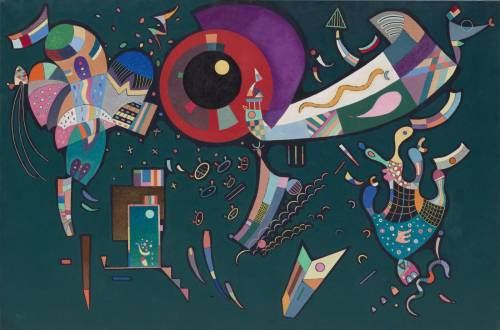 Kandinsky was no Spiritualist of af Klint’s table-rapping-séance type, but he shared an affinity for the occult which was rife among otherwise levelheaded intelligentsia before the First World War. Kandinsky held back from the ghostlier variants of Spiritualism but was in key with the anti-worldly tendencies of a period that has long embarrassed art historians. Many still skate past the mystic roots of the formally reductive painters Piet Mondrian and Kazimir Malevich. That scanted tradition is up for rediscovery. I sense stirrings of a renewed interest in spiritual motives today, primarily among young artists who are fed up with postmodernist irony. If I’m right, I sort of empathize with the urge as a matter of speculative faith, albeit one short of conviction. You can’t gainsay results, however peculiar their premises.

Staked to wealth by the inheritance from an uncle of a building in Moscow, in 1901, Kandinsky lit out for a bohemian existence in Germany, abandoning a wife for a partnership with the dashing German painter Gabriele Münter. They travelled widely, including to Tunisia. Kandinsky, determined to counter French aestheticism with modes that were both earthier and less tied to observation, quickly attracted allies and followers. Owing to his classification in Germany as an enemy alien, he returned to Russia at the onset of the First World War and was trapped there by the Revolution, which expropriated his property, and which he toiled to serve as an educator and an administrator until, with difficulty, he managed to leave, in 1921. He did so with a new wife, Nina Andreevskaya, who may still have been a teen-ager when she married the fifty-year-old Kandinsky, in 1917. He taught at the Bauhaus, where he pursued his commitment to abstraction alongside valued friends and rivals, mainly Paul Klee, who maintained tenuous links to real or imagined reality. After 1933, when the school closed under pressure from the Nazis, the Kandinskys took refuge in Paris. Vasily came to know practically everyone associated with Surrealism and abstract art while solidifying his chief dogma, “inner necessity”—a motive that was his to know and baffling to anyone else. But the impenetrable puzzle of a painting like “Around the Circle” (1940), a riot of heterogeneous whatsit shapes—whimsies, really, adrift in zero gravity—acquired a fashionable sort of prestige, as emblematic of far-out modernity. Didn’t get it? That was the point. You weren’t supposed to.

The mining heir and mogul Solomon R. Guggenheim met Kandinsky in 1930 and began collecting him in bulk. The two men were connected by a mediocre German painter, Rudolf Bauer, who further ingratiated himself as the boyfriend of Guggenheim’s principal adviser, the enthusiastic German baroness Hilla Rebay. (Pastiches by Bauer lurk in the institution’s deep storage.) Rebay styled Guggenheim’s emerging public profile and the midtown quarters of his collection, the Museum of Non-Objective Painting—a solecism, given that all paintings are objects with subjective content—mounting shows on velour-covered walls and piping in classical music. She merits credit for recommending Frank Lloyd Wright as the architect of the museum’s hypermodern whorl, which opened in 1959, though she resigned amid controversy in 1952, three years after Solomon’s death. Her devotion to Kandinsky lingers in the ancestral DNA of the museum. Even absent works by Kandinsky, his equivocal majesty haunts every visit to a building that cannot cease to amaze. ♦